This Blu Elios Lamborghini Urus by AUToart in 1/18 scale is my third shade on this specific model, after I initially added the white one, I also decided to add both the Grigio Titans one and this blue one, mainly because they show a different style for the Super SUV from Sant'Agata.

When the Lamborghini Urus was introduced, the two initial shades in the press release were Giallo Auge and Grigio Lynx, the two shades MR and sister company Looksmart released first, but when it was time to have a factory demo vehicle to travel the world and be used on events after the first release, Lamborghini often showed a Blu Elios over Bianco Polar Urus, which looks absolutely amazing, so when AUTOart released a Blu Elios scale model, I just had to add it to my collection too. 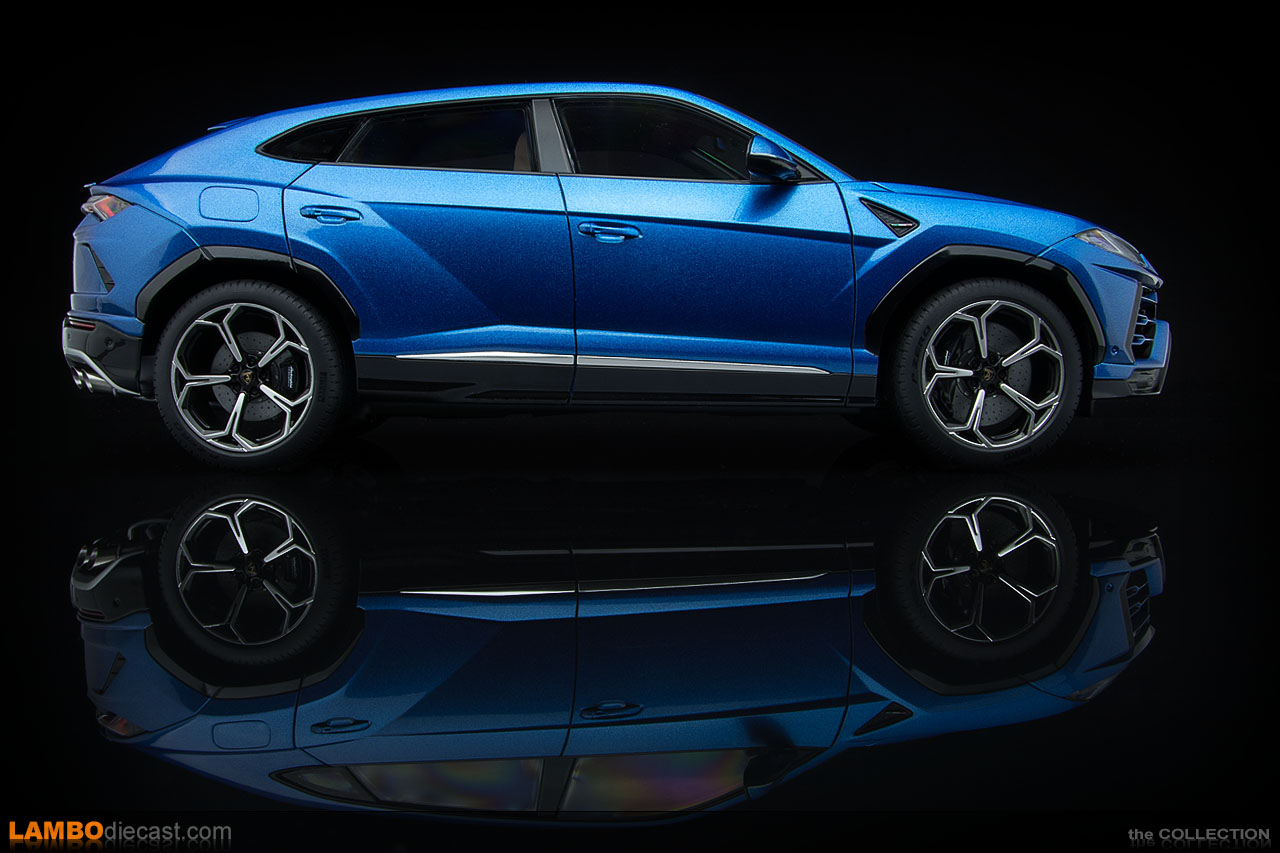 You know I'm a big fan of show car and/or press release colors on my Lamborghini scale car collection, but in the case of the Urus I already bought the Giallo Auge version from Looksmart, so getting this blue shade makes perfect sense in my eyes, unfortunately, the AUTOart model does not represent the Lamborghini show car completely.

As usual, the actual Lamborghini Urus demo car is a highly optioned version, mainly to showcase the possibilities to prospects or existing customers, hence the Blu Elios version came with the 'Style package in body color' option, which means most of the black parts on the body of the Urus get painted in the same Blu Elios, including the wheel arches, and they fitted the most expensive wheel option possible, the 23-inch Taigete wheels in a Diamond finish, while the interior is the 'Elegante leather' version in Bianco Polar with the Q-Citura option. 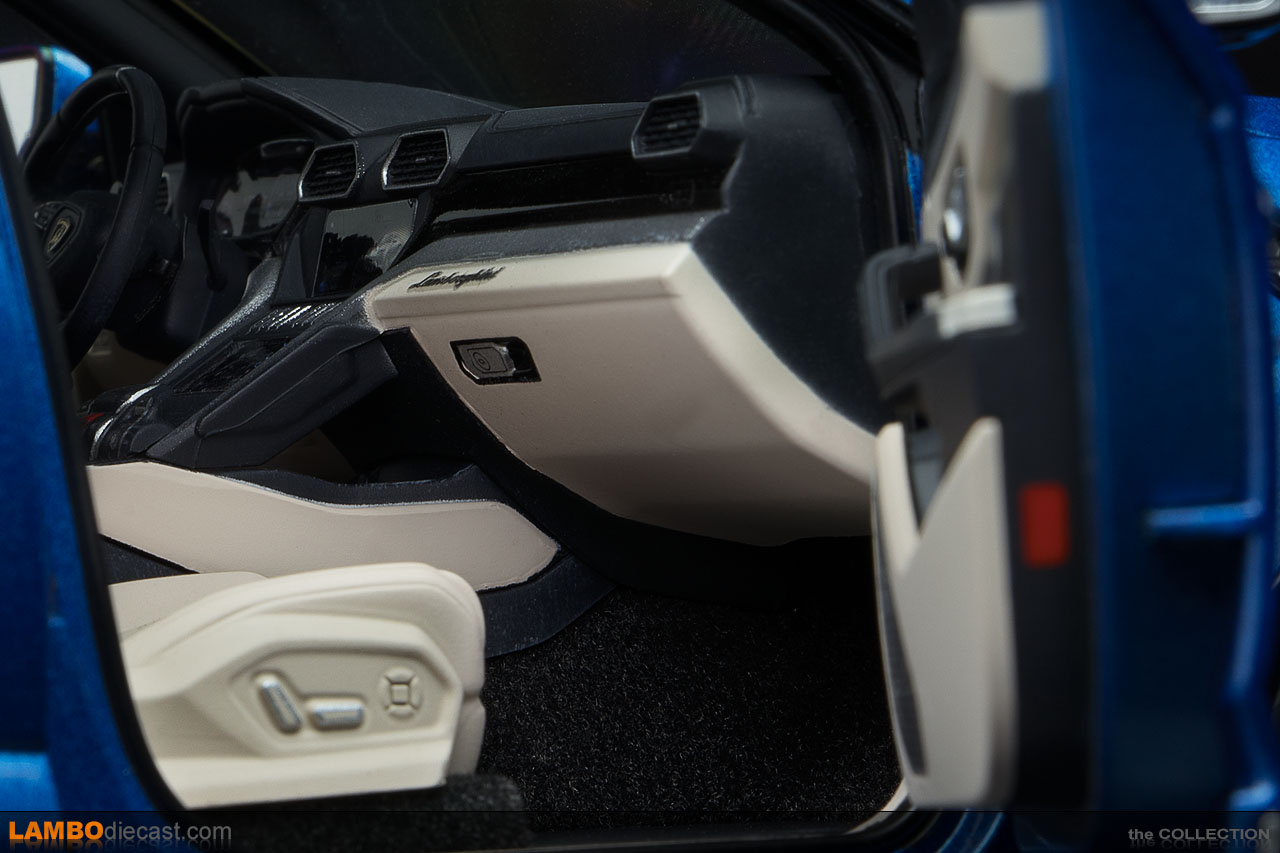 The AUTOart scale model deviates from this Lamborghini show car on several options, both the exterior and interior are the same shade, Blu Elios over a Bianco Polar Elegante leather with Q-Citura stitching pattern, but there is no Style package in body color on the scale version, neither are the Tiagete wheels fitted, instead, AUTOart went with the slightly smaller, 22-inch Nath wheels, still in a Diamond finish nonetheless.

On this blue shade, AUTOart opted for black brake calipers (there is no standard option from Lamborghini for blue calipers, some customers opt for red calipers on a blue car), while the mirror caps are color-coded (on the white Urus AUTOart went for black mirrors), and I'll be the first to admit this bright blue metallic over a white interior looks amazing, a little understated, but very luxurious.

If I take a closer look at the interior, I noticed AUTOart didn't go for the 'four-seat' option but instead kept the three-seat 'bench' seat in the rear, there are color-coded seatbelts, however, and they look great, there is also the 'Advanced 3D Bang&Olufsen Sound System' option on this scale model, recognizable from the silver speaker covers on the doors.

A close look at the Tamburo on the central console unveils this Lamborghini Urus didn't get the optional off-road settings, instead the standard four are listed: "STRADA, SPORT, and CORSA as well the additional NEVE (snow) mode", if you would go for the optional driving dynamics you would get two more options: TERRA (off-road) and SABBIA (sand). 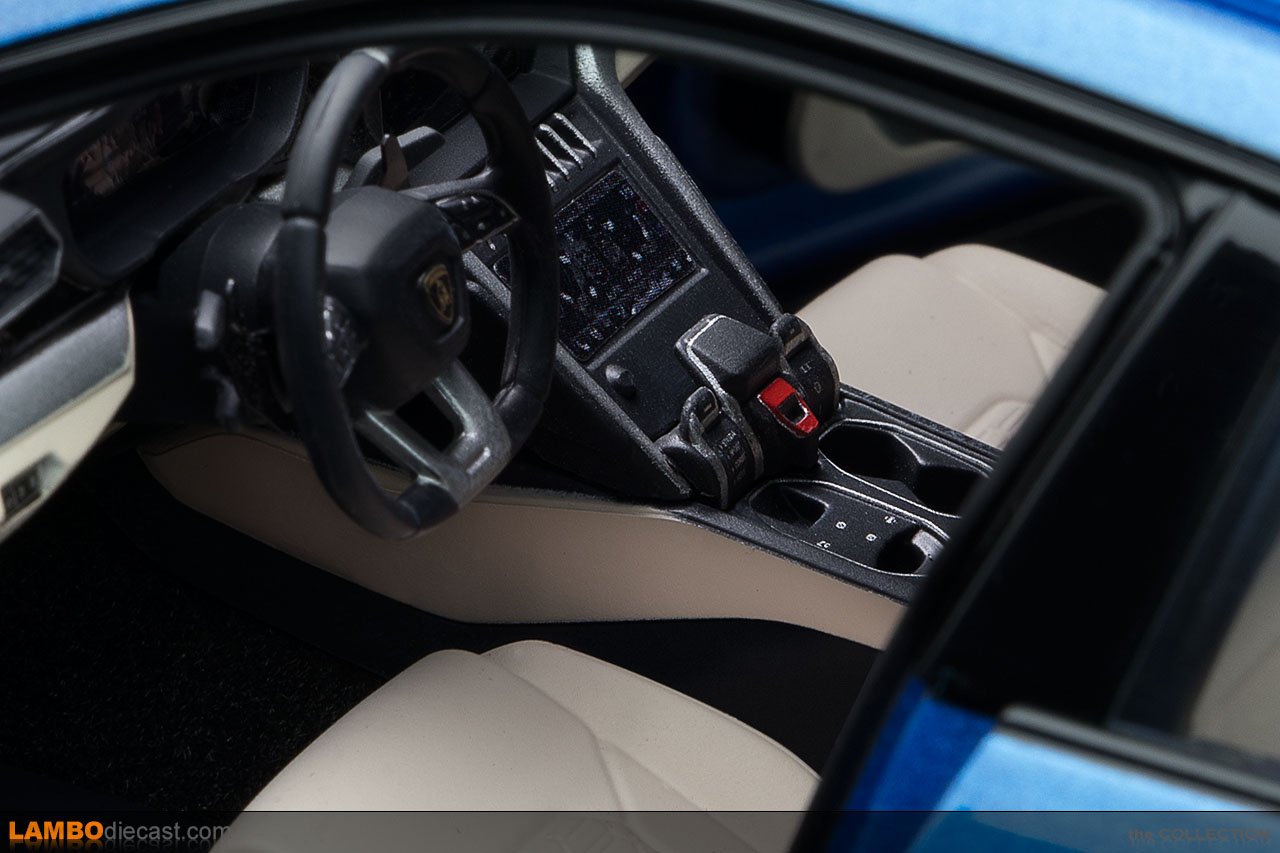 From the press release: "In STRADA mode the height adapts according to speed to enhance comfort, while in SPORT the Urus lowers to ensure stability and precision at all speeds. In CORSA the vehicle is even more precise and performance-oriented with roll at a minimum. In the three off-road modes, NEVE , TERRA, and SABBIA higher ground clearance allows obstacles to be safely overcome, with anti-roll bars providing independent asymmetric movement during cornering to ensure optimal traction."

So why did I get these three shades on the AUTOart Lamborghini Urus, and which one should you add if only one? I got the white one because it came with that amazing two-tone red and black interior, and it was a perfect match for my white over red LM002 from GT Spirit. The Grigio Titans one I bought because I like that shade, and on the Urus the combination with the brown interior just works perfectly, the red brake calipers add a touch of color to her.

But you have to admit this blue over white Lamborghini Urus just looks great too, the color combination is amazing, so I just had to add her too, which of the five Urus shades AUTOart released is the one you should get all depends on your personal preference, I still like the white one the best because of the interior, but both blue and grey are a very close second in my book, yellow follows with black just behind ... but that's just my opinion, you get the one you like best.