By now the Lamborghini Urus Super SUV has been on the market for a little over three years, and it has become a significant part of the production figures at Sant'Agata, outselling both the V10 and V12 models easily, and it's clear to see why, the Urus is practical, can seat five people comfortable (or four depending on the option for the rear seats), and it comes with supercar performance figures.

It took AUTOart a long time to get their 1/18 scale model for the successful Lamborghini Urus ready, and at this point, they are releasing five shades in total, starting with the shade of my first model, Bianco Icarus, or metallic white, next up will be Blu Elios, a very nice metallic blue, after that the Giallo Auge presentation shade and Grigio Titans will arrive, and finally Nero Noctis will join the Lamborghini SUV reign. 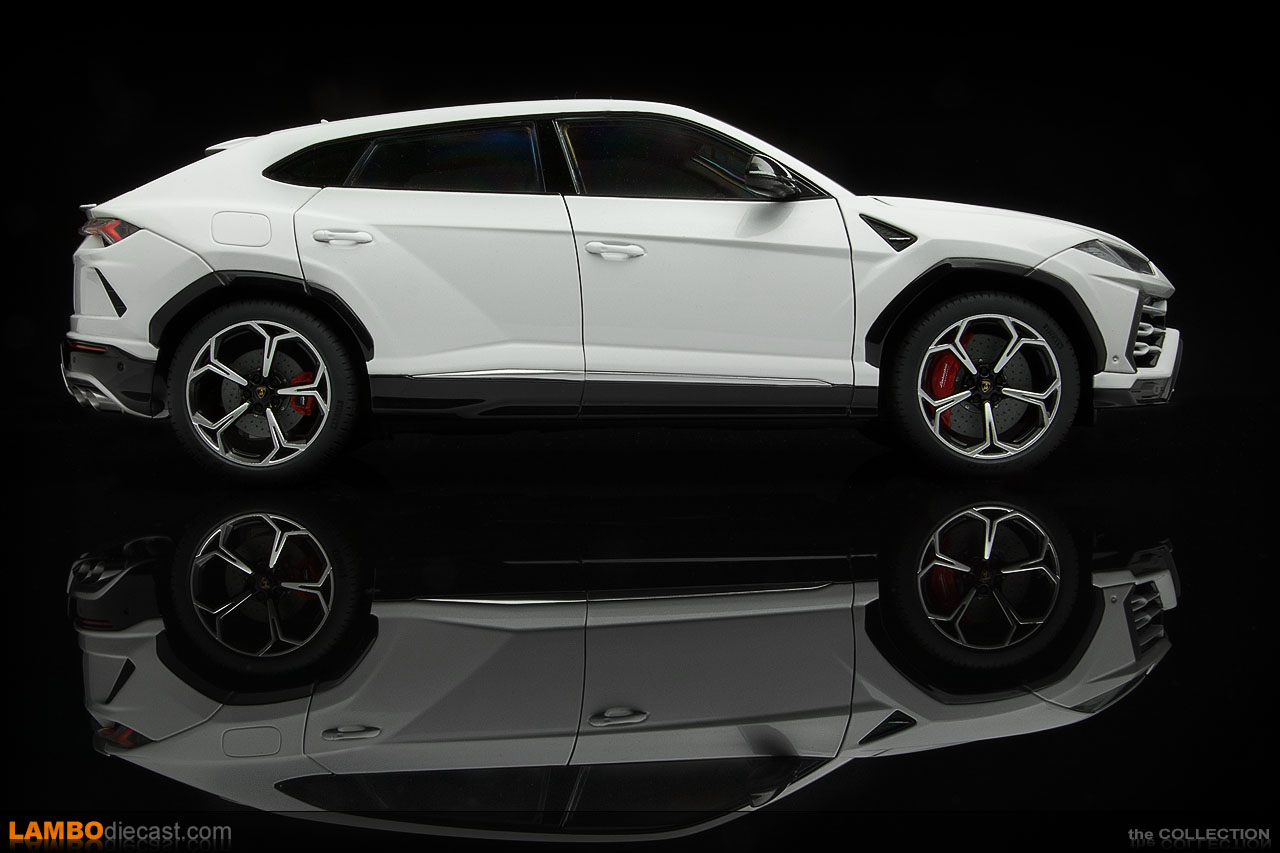 I always had my mind set on the Bianco Icarus version to get first, because I rather like pearl metallic white on recent Lamborghini, and with the red interior of this shade from AUTOart, it would match the white on red Lamborghini LM002 I already owned perfectly ... so that's the shade I ordered when the listing became available, and she arrived in Europe in early February.

The first impression when you receive this model is just how big the box is, when compared to the usual AUTOart 1/18 Lamborghini models, this one is huge ... the model itself is also large being a four-door, four-seat SUV, but the box is just massive, but light, remember this is still a model from AUTOart's composite series ... now I don't mind at all, but I know there are collectors out there who feel this matters, so I mention it here, despite the size, it isn't heavy at all, not like the Looksmart made Giallo Auge Urus I already own, which is a massive brick of resin. 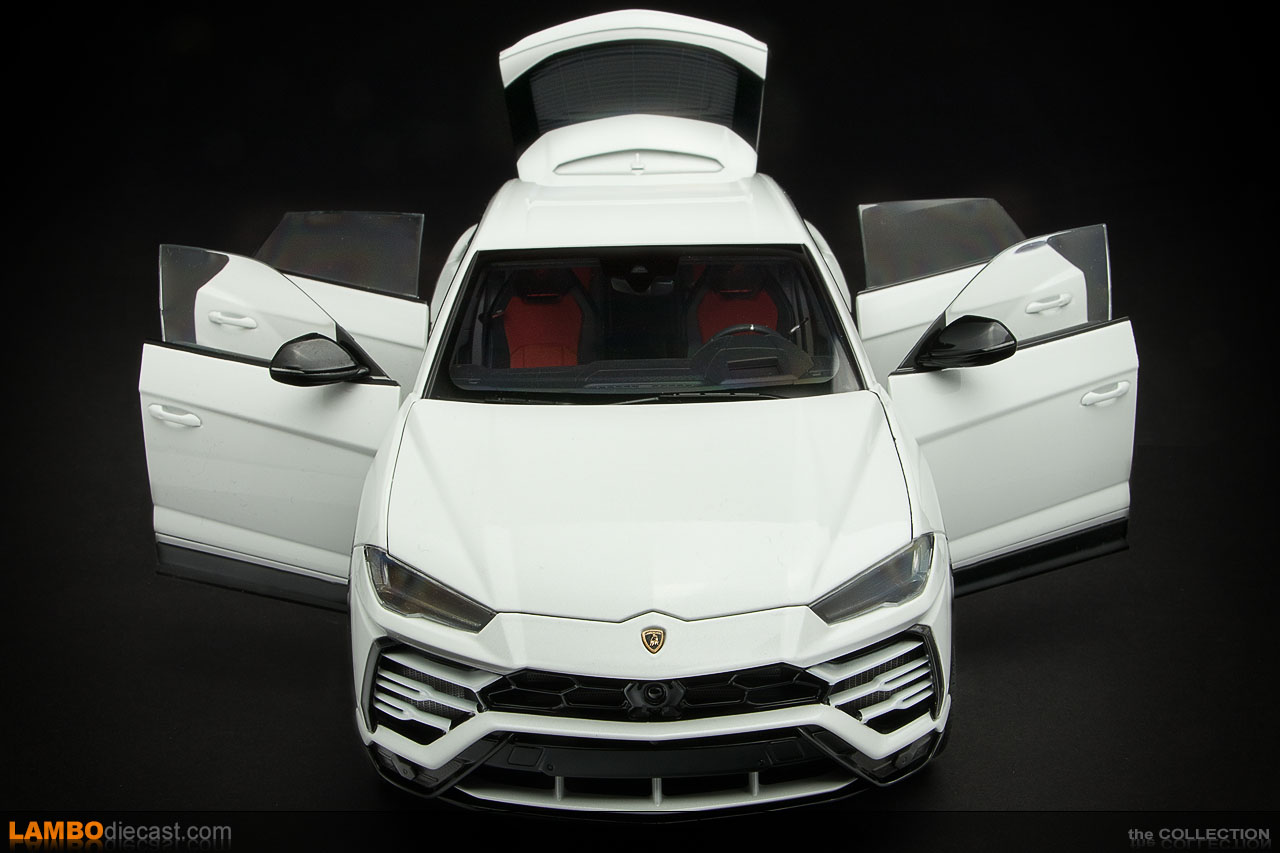 But unlike the sealed resin Looksmart/MR version, this AUTOart beauty opens up, and when I say she opens up, it's all hinged ... engine cover, rear hatch, and all four doors, which come with full-size glass mind you, and if you look really close you can even see the heater wires on the rear window, now that's attention to detail ... and this attention continues throughout this model to be honest.

Under the front bonnet, which has black insulation on the underside mind you, you'll find the big 4.0-Liter V8, twin-turbocharged Bull pumping out 650 hp in real life, and AUTOart replicated that engine very nicely on this 1/18 scale model. The problem is that on the real car just about the entire engine is hidden underneath a cover, so that's exactly how this model presents the engine too ... there isn't too much to see, but what is visible is very nicely detailed and colored to mimic the real engine, so for me, this is a success.

The Lamborghini Urus is a mid-size SUV, so it doesn't come with a third-row seat, but instead, the rear hatch opens up to luggage space, with a cover to hide anything inside when the hatch is closed ... all this is scaled to perfection by AUTOart on this model. It would have been nice if you could tilt or even remove the rear shelf, but other than that it looks great, with carpeting inside and everything. And as mentioned earlier, you can even see the heating wires on the rear window, very nicely done by AUTOart.

The main reason why I bought this white metallic Lamborghini from AUTOart was for the interior, it comes with the amazing looking BiColore Sportivo combination of Nero Ade (black) over Rosso Alala (Red) on the center parts of the seats, the armrest, the lower dashboard, and parts of the door trim ... and I love this color combination inside a white Lamborghini. Another reason was that I already had the correct, press release version in Giallo Auge from Looksmart, with the correct wheels (more on that later). 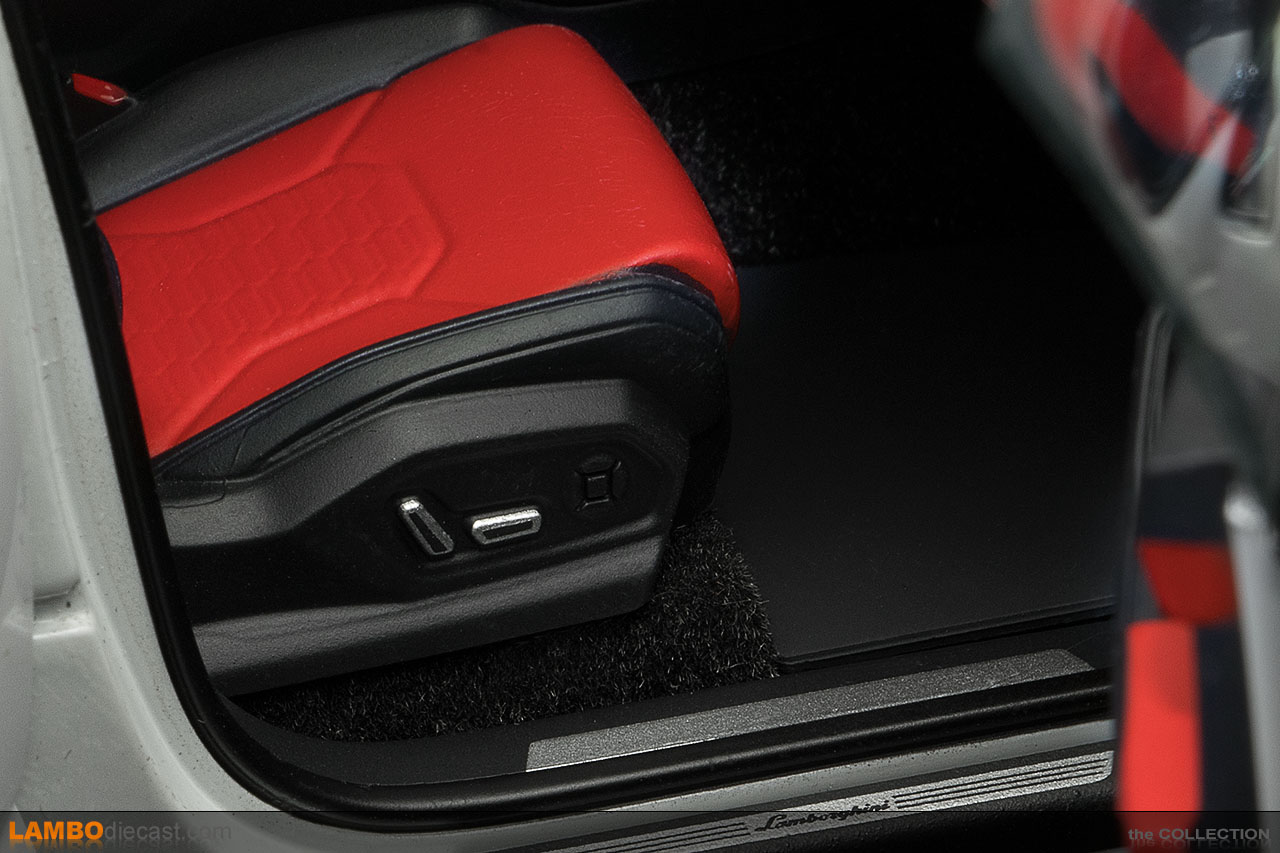 But one thing that took me by surprise when I looked at the photos more closely was the fact AUTOart even put the Q-Citura hexagon style pattern on the seats, I for one love that, and I didn't notice that on any of their pre-release photos, so that really made my day. One little detail that would push this AUTOart interior over the top would be if they added red stitching on the seats and dashboard ... do note that AUTOart did add a red Raging Bull logo on the headrest and seatbelts all around, so no complaints there ... but some stitching on the seat bolsters would look amazing.

Other than that, the interior looks very nice, there are some cast lines on the plastic parts, and as usual, there is a hint of blue in the black parts, but that has been the case since the Gallardo models many years ago, so I'm not putting that down as an issue, it's there, that's all, the black leather sections aren't a deep, satin black inside the AUTOart Lamborghini Urus.

So let's close the doors, hood, and rear hatch and take a closer look at the exterior of this Bianco Icarus Lamborghini Urus by AUTOart. This specific version from AUTOart comes as a model with quite a few options in real life, for one the Bianco Icarus is an optional paint finish, but also the 22-inch Nath wheels are an option, especially in this Diamond Cut finish with the glossy spokes on the otherwise glossy black wheels, and what I really like is the fact AUTart has put Pirelli P Zero embossed onto the tires, another very nice detail.

The beautiful red brake calipers are again an option in real life, and I just love them, the detail is very crisp, and they even have the Lamborghini Carboceramici scrip on them, even the disk brakes themselves look amazing, complete with look-alike perforation, even the screws on the brakes are detailed enough to admire, and while some might complain about the 'plastic' look of the disk brakes ... there are ceramic disks, they don't look like steel disks in real life either.

Sadly this AUTOart model doesn't come with the Panoramic Roof option, nor the Roof Rails, nor the Privacy glass at the rear, which I rather like, but that's a choice, not an issue. what AUTOart did fit is the 'Black Gloss' Style package. This means the lower part of this white Urus comes in glossy black, as do the wheel arches and the rearview mirrors, and it also includes color-matched 'forks' in the front bumper air intakes. 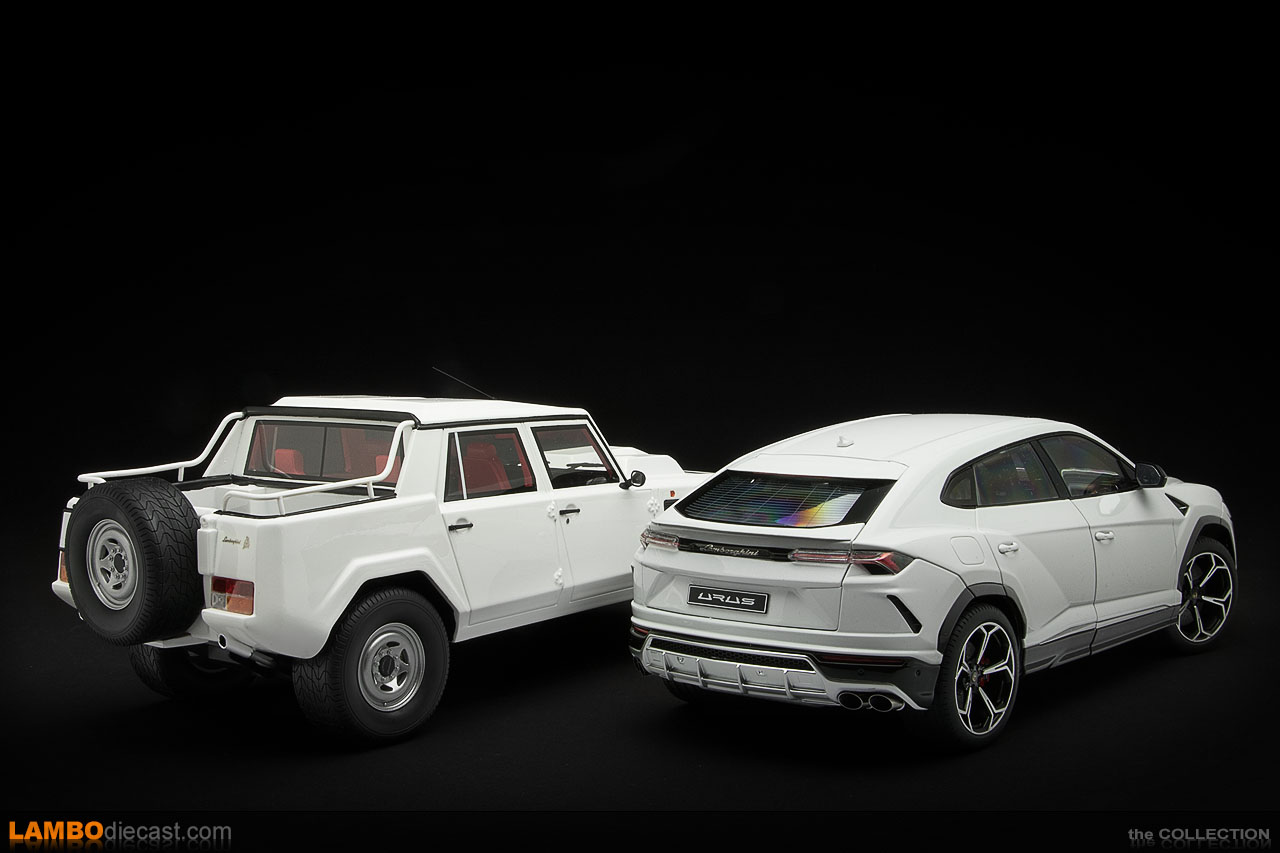 This Lamborghini Urus does not come with any carbon fiber optional parts on the exterior, nor the off-road Package, which has a differently styled front and rear bumper on the real Urus. At the rear, we find four silver exhaust tips on this model, and I am impressed with how they look ... almost like metal, remember the real car comes with satin chrome tailpipes, so the finish AUTOart put onto these is spot-on.

Now, personally, I never liked that silver rear diffuser on the Lamborghini Urus, and these days you can tick an option to have it finished in black, possibly even carbon fiber, but until recently the only option was silver, so that's what AUTOart used on their model ... I still don't like it, but it's correct, so who am I to complain. On the rear hatch there is a small rear wing fitted at the bottom of the window, paint to match the rest of the body, just like on the real car, but you can have it in carbon fiber from the factory ... just not on this model.

I do love how AUTOart put that large Lamborghini script on the rear, also the Raging Bull crest at the front looks great, and the Tricolore flag on the air vent on the front fender is there too, as is that 'shark fin' antenna on the roof and the thin, red strip in the rear bumper ... attention to detail from AUTOart to mimic the real Lamborghini Urus as closely as possible.

If you look at the front bumper, you'll notice the different radiators behind the intakes, all detailed as on the real car, and visible, even the grille in the rear bumper is open it seems, all very nicely done by AUTOart.

So what's the bad news then? It can't all be good, right? 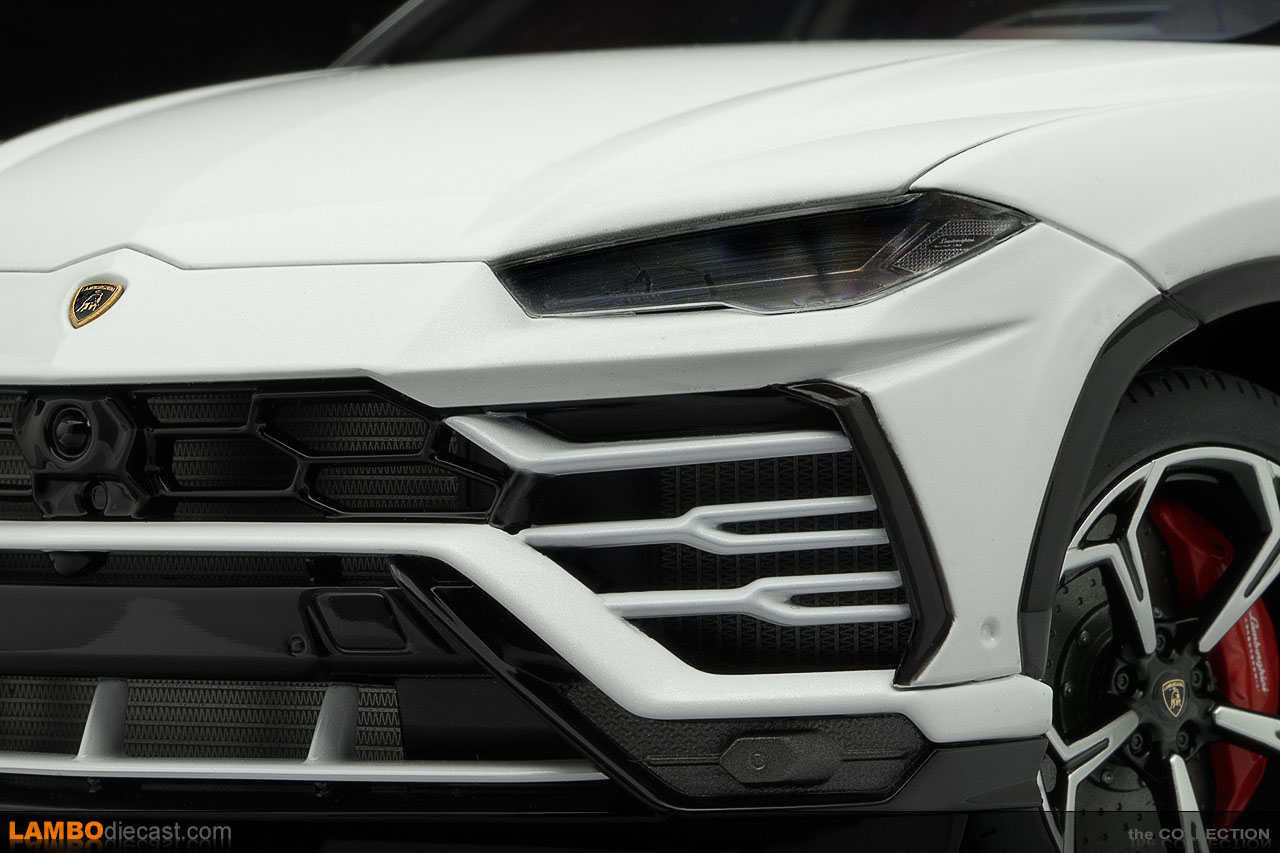 Well, of course not, there is some bad news too ... and let's get to the elephant in the room first, the headlights. Just about everyone online is complaining about the lack of detail in the headlights of AUTOart's Urus model. Let's look closely at these units, the long Y-shape LED is present, there is even a hint of headlamps in the pod too, and more importantly, check the sides ... that's where the very small details come into view ... the Y-shapes are there, as is the 'Lamborghini Technica LED' script ... so there isn't a lack of detail in these headlights. Also note that on the real car, when the lights are off, you see exactly the same thing as on this AUTOart model.

So what's the other issue then? Personally, I would have liked to see a different wheel design on the other shades, especially the Giallo Auge version should really come with the Taigete 23-inch wheels so it would be an exact replica of the show car, and while I'm at it, the Blu Eleos could have used the optional 'Body Color' Style package where the lower parts of the Urus and the wheel arches are color-coded to the rest of the car, a specification Lamborghini regularly used for their show car Urus.

But apart from those two minor issues, I really love this white over black and red AUTOart made Lamborghini Urus 1/18 scale model, and I strongly believe at least one of the shades AUTOart is releasing should find its way into a scale car collection.

And just look how good this Urus looks next to the big Lamborghini LM002 made several decades ago: