I'm sure most scale car collectors have a few of these, 'the one that got away', a model that you could have bought, that you should have bought, but you didn't buy ... and later on the model became so rare and expensive, it just isn't reasonable to add it anymore. I have several like that, but the one that comes to mind now is the blue LB-Works Lamborghini Aventador by GT Spirit, they announced it in December 2015, as a pre-order for €99 ... and I wanted to get one, but decided to wait for it to arrive in online shops ... turned out that would never happen in the end, and only the direct pre-orders were made, a total of 504 units got sold, and their value skyrocketed, rumor had it GT Spirit messed up the license for this model.

I have seen the original blue GT073 LB-Works Aventador change hands for €500 before AUTOart released their version in 1/18 scale in November 2018, but GT Spirit did manage to release their LB-Works Aventador in early 2018, this time in the famous matt grey 'Zero Fighter' livery, and I was so upset I missed out on their blue one, I immediately ordered the GTS18502MG version the moment it was listed.

Back in those days, GT Spirit had a partnership with Kyosho, they released the same model, usually at the same time, but in a different color or in a different livery, and when GT Spirit made their grey LB-Works Aventador, the Kyosho counterpart was a bright, gloss yellow one, and while I didn't add it to the collection in 2018 when new, I finally managed to obtain one of only 500 made in late 2021.

So far I have had the original matt grey GT Spirit LB-Works Aventador in my collection, joined by all five of the AUTOart versions, but this Kyosho released yellow shade wasn't part of my collection yet, and I rarely see it being offered for sale either, so when this one popped up on a second-hand website located in the Netherlands I got in touch with the seller, made him an offer, and arranged to pick it up. 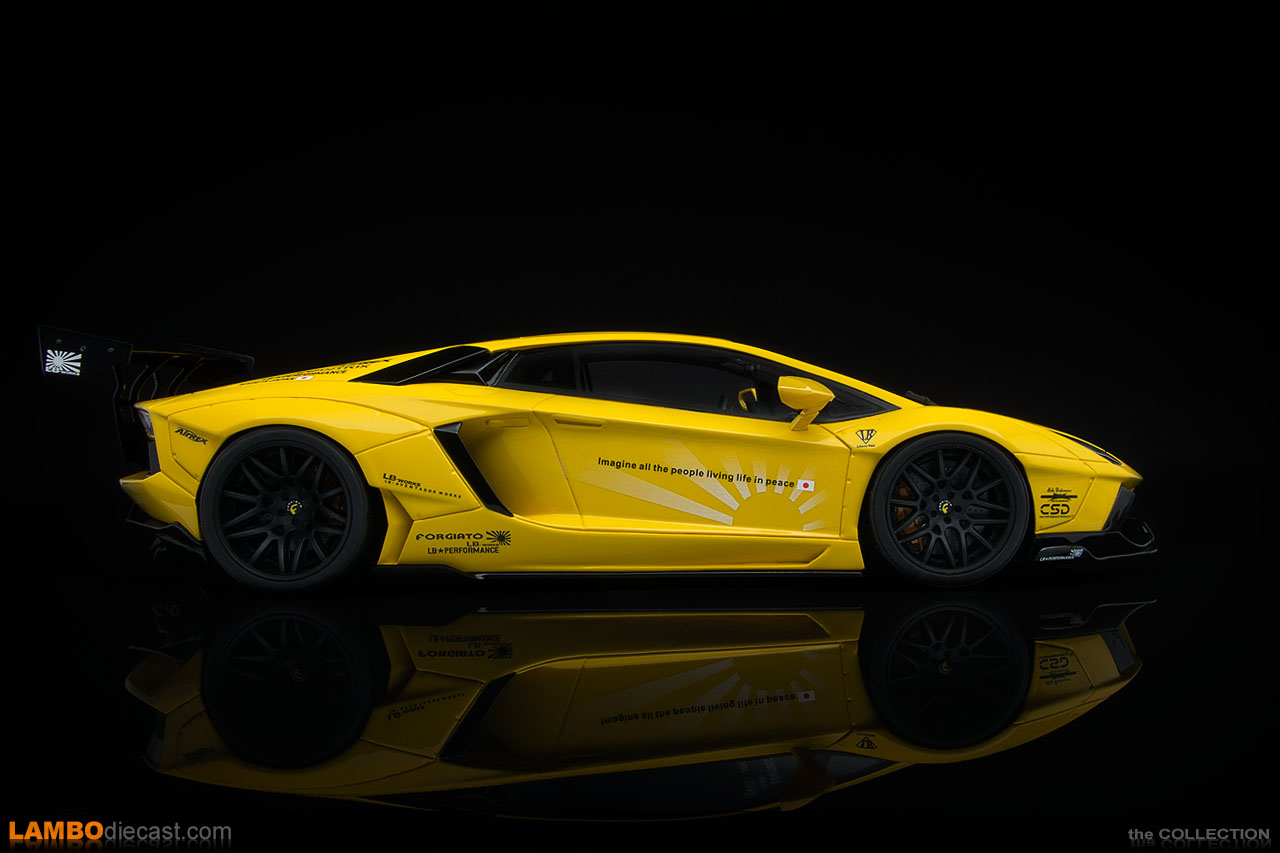 In the end, I managed to add nr 297/500 to the collection, and while the interior is a simple all-black deal with the silver central console and door handles, it is the bright yellow exterior that draws all the attention to itself, AUTOart really should have done a Giallo Orion version too, with the glossy black wing, front spoiler, and satin black wheels, this really is an amazing looking combination on the wide-body LB-Works Lamborghini Aventador.

The body kit in itself and the wheels are identical between the GT Spirit and this Kyosho version, but there is a big difference between both models when it comes to the details, more specifically the decals used, you still have the 'Imagine all the people living life in peace' on the doors, but this yellow Kyosho one is the only one with the rising sun artwork on the doors, also the Armytrix decal is only used on the Kyosho version, it seems the GT Spirit version comes with an FI Exhaust.

The Airrex air ride suspension is shared between them both, as are the Forgiato wheels, but note that on this yellow Kyosho version, the F on the wheel center is yellow too, a very nice detail, strangely enough, both come with gold brake calipers, personally I would have used yellow calipers on the Kyosho version, but that's just my opinion.

Furthermore, several other decals are different between these two models, so it is really nice to see they made a difference between the GT Spirit version on one hand, and this Kyosho version, on the other hand, it would have been so much easier just to have an alternate color and call it a day, keep all the details the same, but they didn't, and I for one really appreciate that.

So did I really need another LB-Works Lamborghini Aventador on a 1/18 scale in my collection? No, of course not, I already have six in total, but I didn't have a yellow one yet, and she looks really good in this famous Lamborghini shade, so I decided to add this one anyway, I know there is also a pink metallic version made by Kyosho, but that one seems to demand a serious price these days, and I'm not tempted to buy one anytime soon, it would be a nice to have model, but surely not a must-have ... not yet.