While at the time of writing, the Lamborghini Aventador production has been halted, and we'll be seeing the successor being unveiled anytime soon, I still look back at the Aventador SV, or the LP750-4 Superveloce as its full designation was, as the most aggressive looking Aventador of the entire series.

The original 2011 Aventador LP700-4 looked great when unveiled, but just two years later we got the first restyle with the LP720-4, also known as the 50th Anniversary edition, but arguably the most intricate evolution was the LP750-4 Superveloce in 2015, a limited production model with just 600 units as a coupe (just 500 as a Roadster), with a very aggressive front spoiler, black side sills, an amazing rear diffuser with four thundering exhausts in the center, and for the first time on the Aventador, a fixed rear wing that was inspired by the one from the Aventador J, a kind of 'hanging' swanneck rear wing ... full carbon fiber naturally. 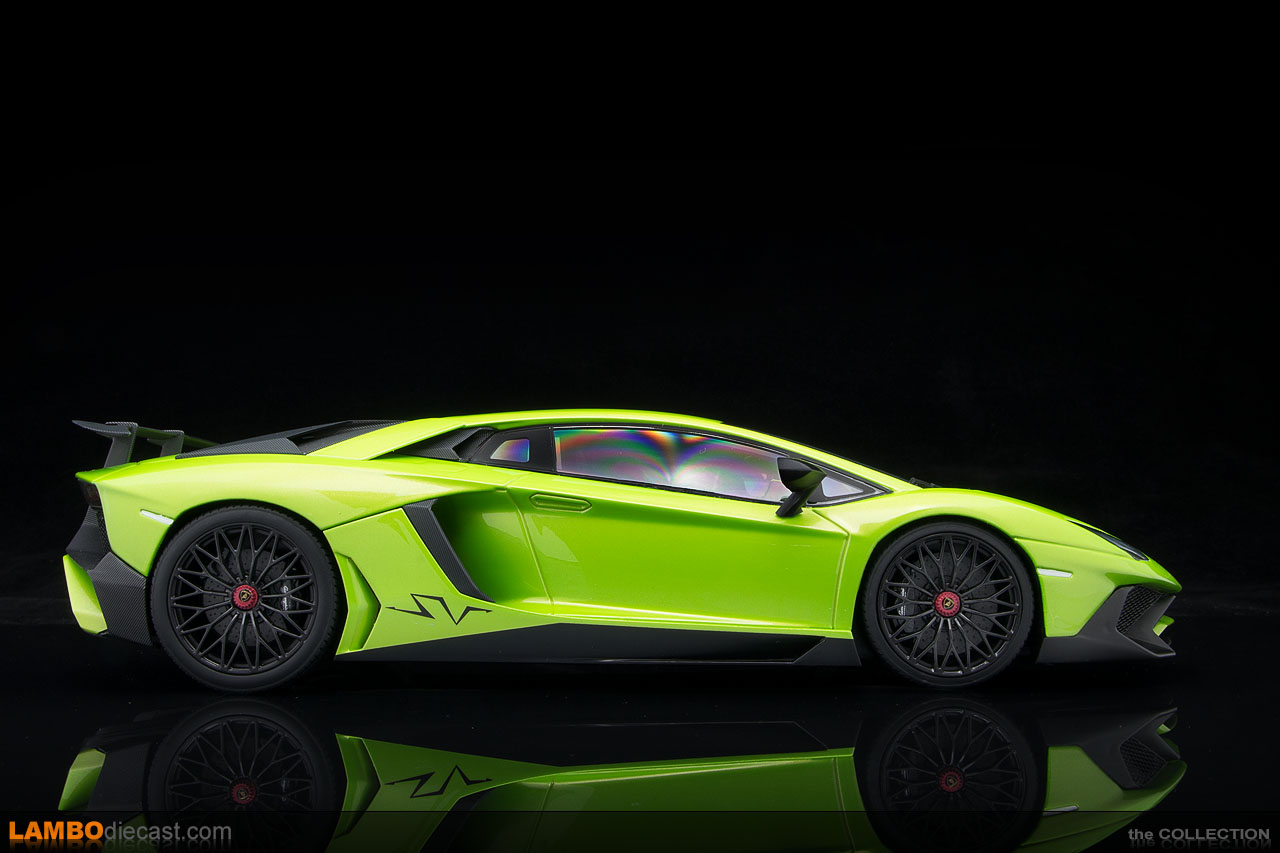 The 600 units of the Aventador Superveloce quickly sold out, and while I do prefer the AUTOart 1/18 scale model because it opens up completely, I had to turn to Kyosho with their Ousia series to get the press release shade, called Rosso Bia, a new 'glittered' metallic paint developed specifically for the Superveloce, like Blu Sideris ... sadly AUTOart released neither, but they did do the New Giallo Orion one, without the small SV script, just as it was shown at the Geneva Motor Show in 2015, note that in real life you could opt for a small SV script in front of the rear wheel on the side sill or a large SV above the rear wheel.

In the end, Kyosho released six shades on this 1/18 sealed diecast Aventador Superveloce model, starting with Rosso Bia and Bianco, later adding Nero and Arancio, and after that this Verde and a Giallo one ... so far I've been able to collect five shades already, I'm just missing the Giallo one, but both Verde and Giallo seem to be rather rare in Europe.

Keep in mind these Kyosho Ousia models are sealed diecast, so nothing opens, initially, these were about €99, but these days prices have increased substantially on some of these models, like a blue Huracan for instance, or the Giallo Aventador Superveloce, which are €200 and more right now.

Also, note the interior is rather simple, there are no seatbelts to be found, and the details are a little absent to be honest, which is why I really prefer the AUTOart model, but those are even more expensive these days, and the latter did six different shades, including a very intimidating gloss black one, but because you get different colors on these Kyosho ones, they are still interesting to add to the collection.