In 1993 Lamborghini revealed a celebration model once again, five years after the Countach 25th Anniversary, it was time for the Diablo to commemorate the 30th birthday of Automobili Lamborghini SpA, and the Diablo SE30, for Special Edition 30 years was unveiled in that very special Viola 30 shade over a blue Alcantara interior, limited to just 150 units, all individually numbered, the Diablo SE30 was already destined to be a rare collector's item, but things were to get a lot more interesting.

When production of the Diablo SE30 was still going on in 1995, and several had already been delivered to customers, Lamborghini Engineering SpA created the JOTA add-on kit to make the car eligible for entry into the BPR FIA GT racing.

Since many of the 150 units were already delivered to clients at that time, only 12 or so Diablo SE30 Jota were actually built at the factory, the remaining kits were mostly installed by dealers on cars that were already with their owners, but there was something even wilder than a Diablo SE30 Jota, and only one was built.

Check out the 1995 Diablo SE30 Jota Corsa, a bespoke build requested by the JLOC racing team to replace their aging Countach 25th Anniversary race car, the famous yellow one with the Rian-X decals.

The engine was even further engineered, and sources mention the use of an injection system derived from the famous V12 marine engines Lamborghini built at that time, with a carbon fiber airbox instead of the pressure plate we've seen on the Jota kit, and to really make some noise, the exhaust was cut straight into the panel between the taillights.

Wider front fenders, additional air intakes in the front bumper, that also lost a pair of lights along the way, air vents in the front hood, carbon fiber intakes on the engine cover, sliding side windows made from lightweight plexiglass, and naturally a massive, adjustable rear wing were needed to make a track monster out of the Diablo SE30 Jota, add a set of OZ-Racing center-lock wheels, and you're done ... on the exterior.

On the inside we find a pair of bright red Sparco racing seats with a multi-point racing harness, a quick release steering wheel, and a full roll-over cage fitted for protection, also the central console got race regulations switches while just about everywhere you looked there was carbon fiber on the interior, the safe more weight the entire dashboard cluster was replaced with a small LCD screen. 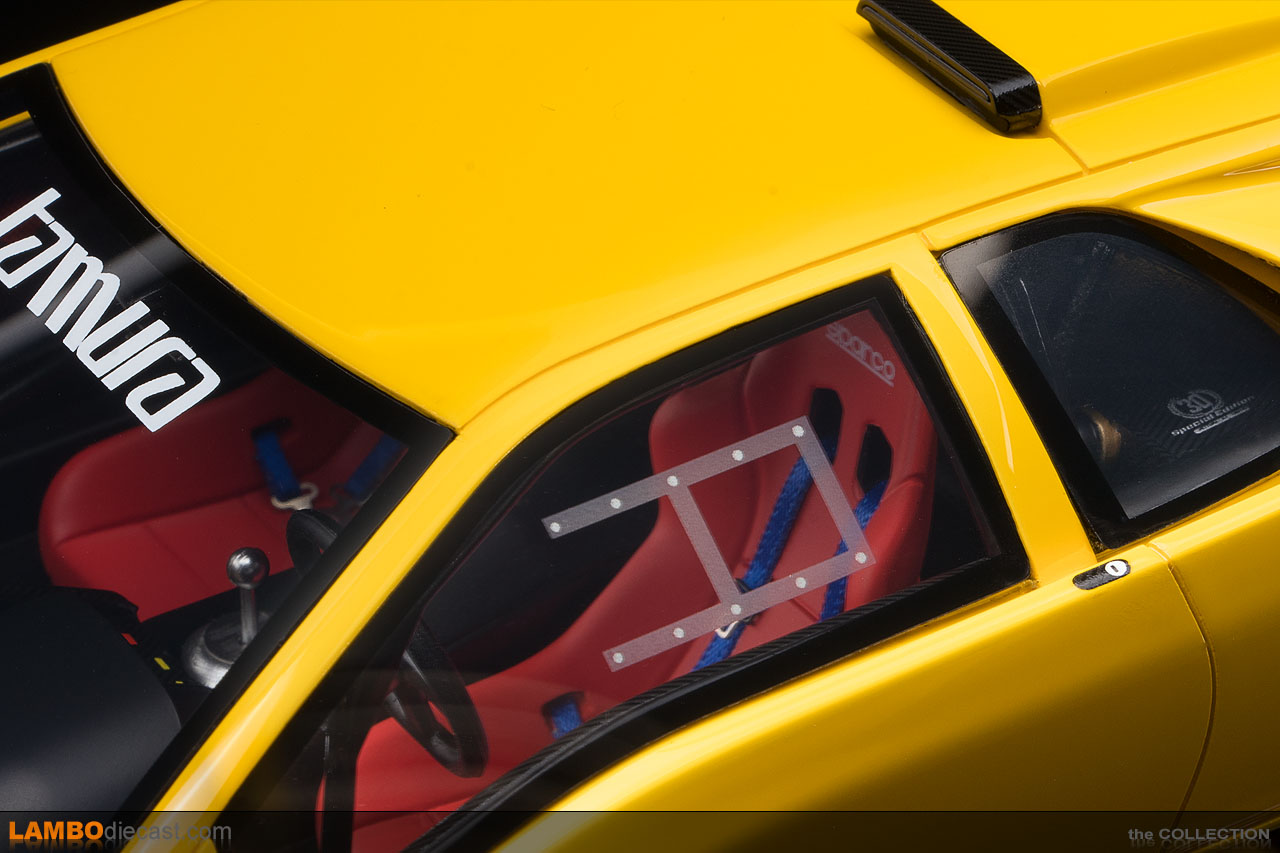 After this bright yellow Lamborghini Diablo SE30 Jota Corsa, there were three more cars ordered for racing in the Japanese GTC Series, these were called the Jota P.01, P.02, and P.03, and by 1996 Lamborghini created their racing series with the Diablo SV-R which would later evolve into the Diablo GTR monster.

So how did GT Spirit do with their latest 1/18 scale Lamborghini model, the one-of-a-kind Diablo SE30 Jota Corsa? At first glance quite well, to be honest, the car looks amazing, she's riding a bit high compared to the original press photos from 1995, but other than that it seems they got the details right.

The shade looks correct, a rather warm hue of yellow, all the Jota Corsa specific details seem to be there, like the air intakes and air vents, even the small section of carbon fiber protruding from the intakes on the engine cover, the car did come with that Tamura decal on the windshield, and even the make on the side panels of the rear wing is correct.
GT Spirit even went as far as putting the SE30 crest and the 'vettura xxx/150' plaque underneath the glass behind the driver, but the printing is so unclear I can't make out the actual number to see if they got it right.

The OZ-Racing, multi-piece, center-lock wheels look nice, so do the grooved steel disk brakes and even the gold-finished brake calipers, and the two big, black, center-mounted exhaust pipes look real too, unless you shine a light into them, they are closed up a few mm into the pipes naturally, you can't win them all. 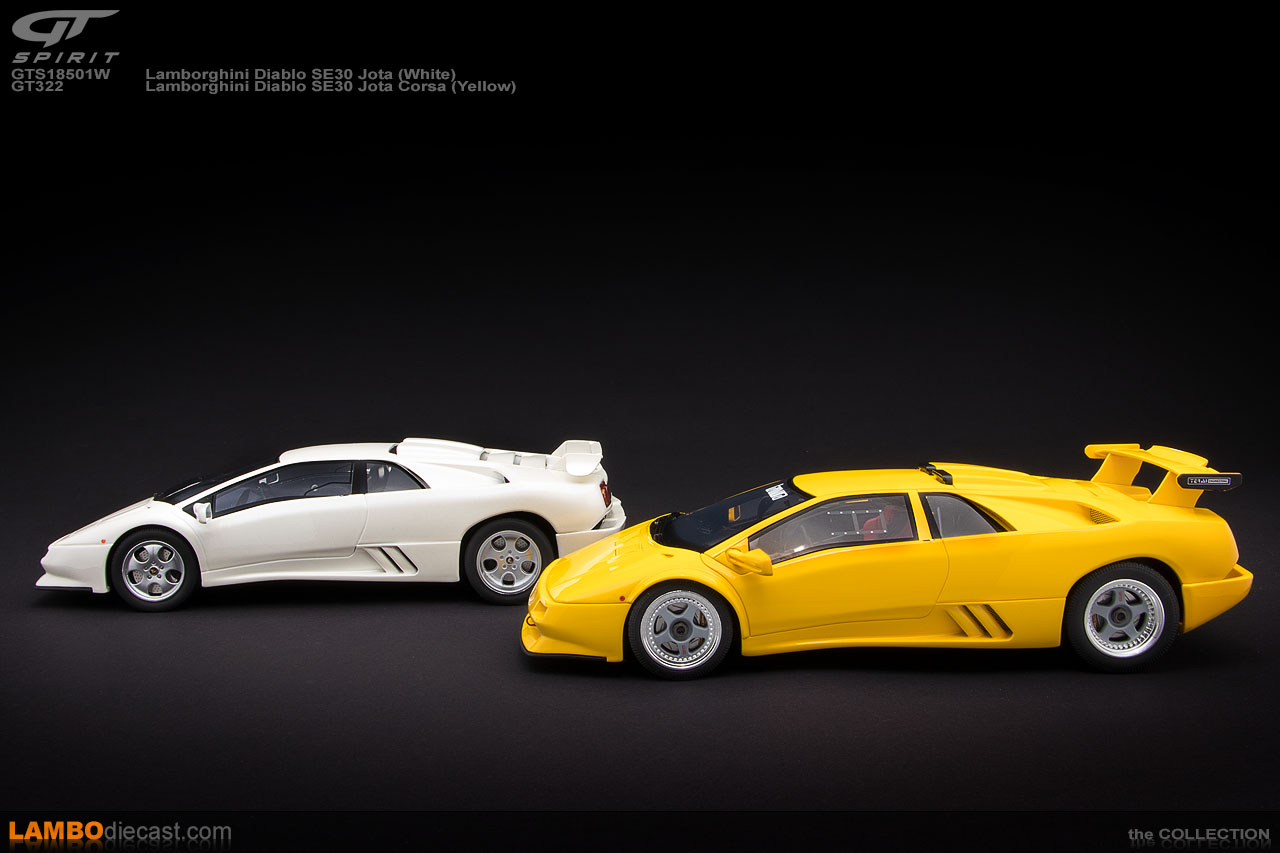 On the interior things look very nice too, the red Sparco seats are amazing, the blue seatbelts look clean, and that central console with the large gear shift lever looks correct for a race car, even the dashboard cluster was removed, and replaced with a digital display, and let's not forget that massive roll cage inside and the carbon fiber door panels, GT Spirit went all-out on this model.

While you can see parts of the engine through the open engine cover from the rear, it looks like a regular Jota set up there, which isn't correct, there should be a carbon fiber air box above the gold manifolds with different uprights, you can't really see much as you can't remove the engine cover (it lifts off on the real car, it is no longer hinged at the roof), but I have my doubts they got this detail right.

But that shouldn't hold you back from adding this model to the collection, there were no QC issues on the model I received, the paint was glossy and smooth, no dust speckles in the top coat and all four wheels touch the floor, and at €100 this really isn't an expensive model with all the details they did put into it, and I just love how she looks between the regular Diablo SE30 Jota and the Diablo K.O. that was inspired by this Diablo SE30 Jota Corsa. 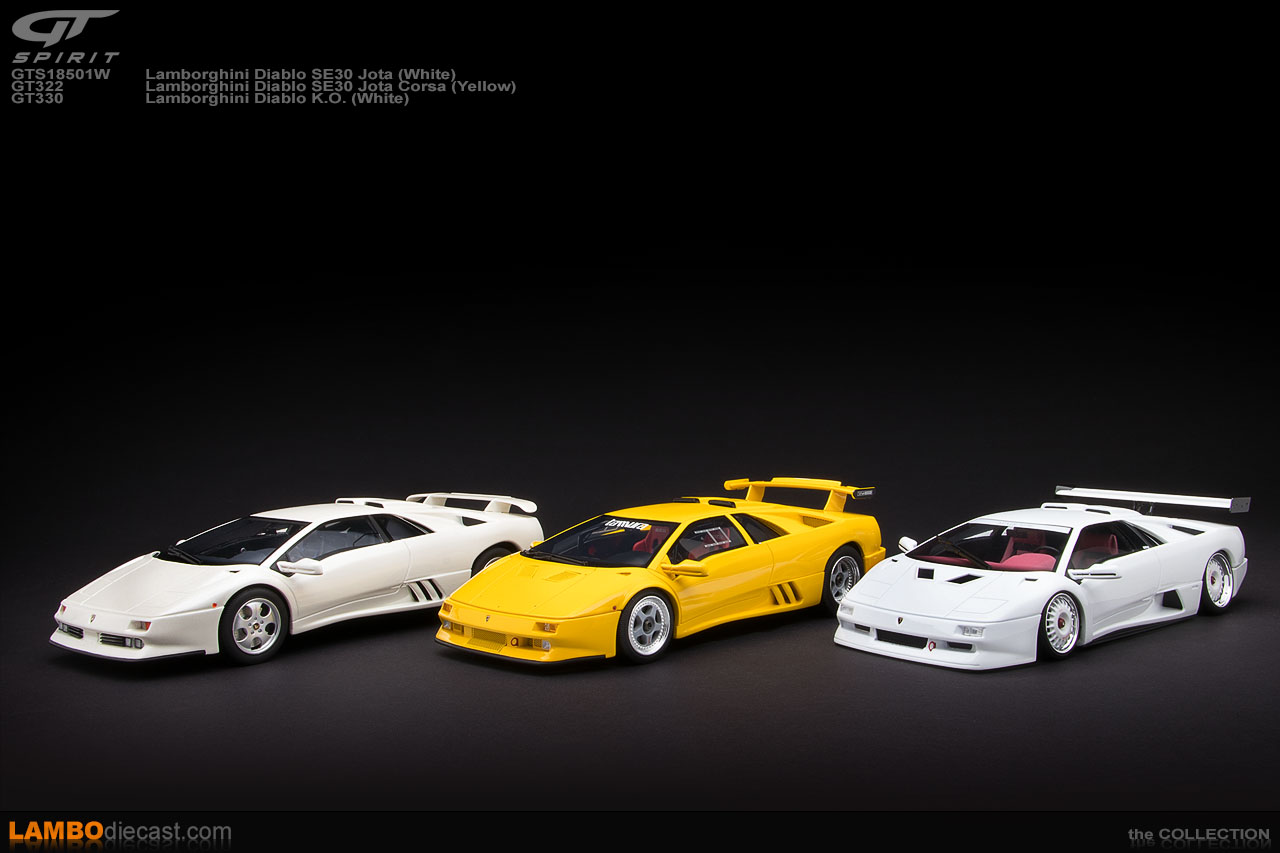