Back in 2020 Lamborghini unveiled something really special, we've seen several limited edition models on several Lamborghinis in the past, even some one-off cars like the amazing Aventador J, and based on the same underpinnings, the SC18 and SC20, created at the request of a special client as a colaboration between the Centro Style and Squadra Corse, the in-house racing department, hence the SC designation.

While we've see some amazing Huracán race cars developed by Squadra Corse, note that both the Huracán Super Trofeo and GT3 are actually built on the same Linea Huracán as the regular road cars, it has been a while since we had a V12 race car from Lamborghini ever since the Diablo SV-R and GT-R, and later the Murciélago R-GT and R-SV ... but now we have a track-only Aventador version.

To be honest, the 2020 Lamborghini Essenza SCV12 doesn't have too much in common with the Aventador road car, the Essenza was the creation from Squadra Corse using a V12 for the first time, and production would be limited to just 40 units, none of which would be legal to be driven on the open road, these are pure bred race cars, destined to be used at specific events and track days.

The Lamborghini Essenza SCV12 uses the legendary 6.5-Liter NA V12 engine found in the Aventador, but now with 830 hp, making this the most powerful Lamborghini in history with a Nat.Aspirated V12, and that glorious sound emitted from the dual exhaust is courtesy of a Capristo partnership, the power goes to the drivetrain through an X-Trac sequential gearbox to the rear wheels only. 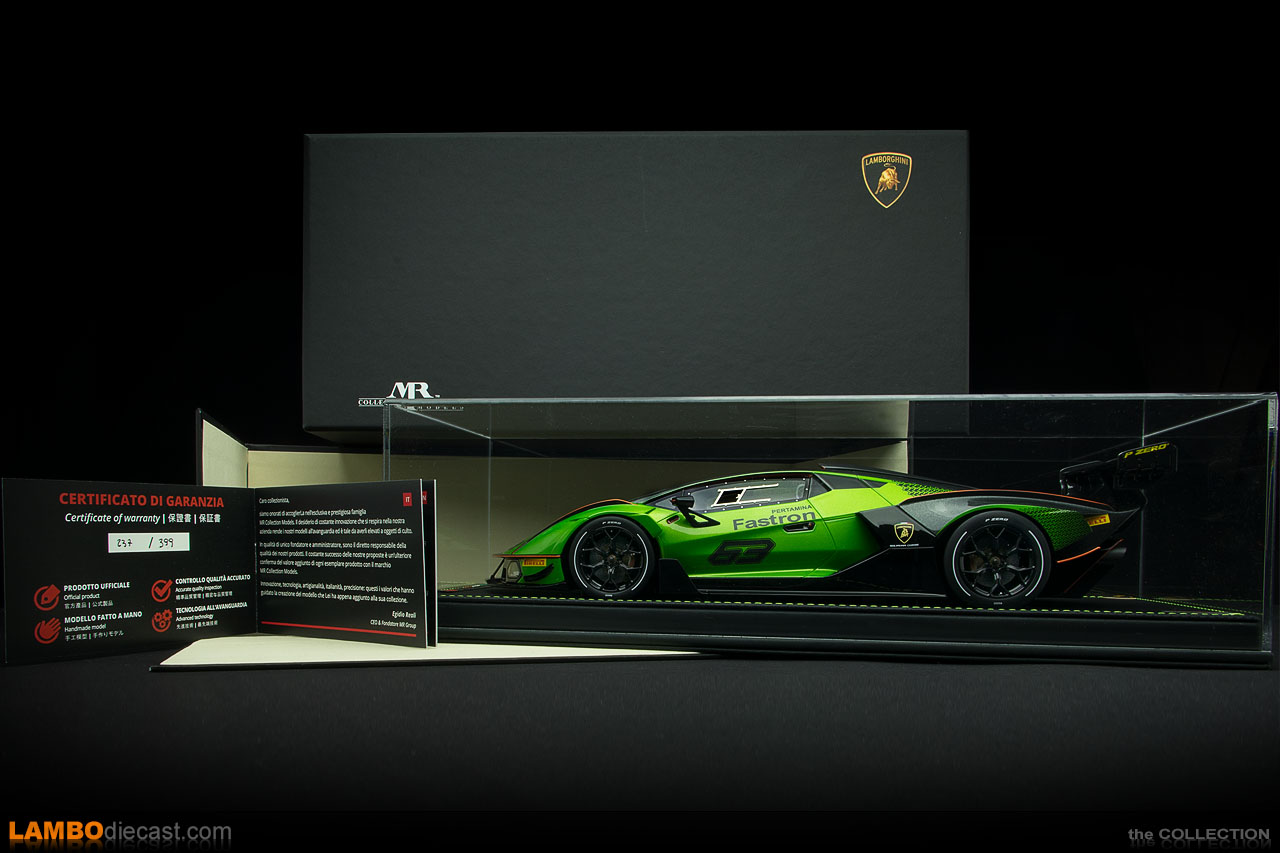 Wheels are center-lock 19 and 20 inch magnesium wheels with Pirelli slicks, hiding a Brembo Motorsport braking system, just to have an indication on the amazing work Squadra Corse did on the styling of this Essenza, she boasts a massive 1,200 kg of downforce at 250 km/h, that's more than current GT3 cars!

The special steering wheel was inspired by F1 racing, it incorporates a display and all necessary controls so the driver does not have to let go of the wheel while being seated in a carbon fiber OMP racing seat, fully homologated by the FIA.

Rumor has it each unit of the 40 Lamborghini Essenza SCV12 will set you back about US$2,600,000, combine that with the fact you can't drive it on the streets might scare some people, but it seems Lamborghini didn't have too much trouble selling these.

As far as I know only MR made the Lamborghini Essenza SCV12 in 1/18 scale, so I just had to get one of these for my collection, and while I love this car in the white and black combination, I just had to go for the original press release color scheme, bright green on black, and be honest, she does look amazing like this.

If you get your hands on the typical black MR box for the Essenza SCV12 the first thing you notice it the fact this is a larger box that usual, MR had to make the plinth and display cover longer to fit the entire car inside, as you might expect the front overhang is substantial on this model, but I guess it's the massive rear wing that really required a longer box, and I don't mind, this is an impressive model to have on display.

There are a few different finishes on this specific livery, most of the car is finished in what looks like Verde Ithaca, while some parts are finished in Nero Aldebaran, a glossy black, that goes into dark grey metallic gradient, and then you get lots of clear carbon fiber, naturally that massive rear wing and the two big struts are finished in glossy carbon fiber, but also the engine cover is made from this lightweight material and finished it with a high-gloss top coat so we can admire it.

MR used a lot of metal grilles on this model, at the front we find massive air intakes, two driving lights in the lower bumper, as there are no headlights on this race car, and we even see two small fittings to hold the flat lower splitter in place.
The typical red strap is replicated by MR in cloth on the front section, as is the famous '63' number, while there are two massive air vents just ahead of the windshield, if you look into them you'll notice the radiator.

Above the roof you'll find the orange trimmed ram air intake for the high-power V12 engine hiding underneath the very stylish engine cover which leads us onto the large rear aerofoil with the Roger Dubuis sponsor livery, other than that we find a few yellow Pirelli decals, a Pertamina and Fastron decal on the doors, and on the side panel a large Lamborghini crest with Squadra Corse writing, the P Zero script on the side blades of the rear wing completes the 'sponsoring' livery on this press release version.

On the inside we find a very special driver seat, complete with Essenza SCV12 logo, and a passenger seat ... that's right, you can share the experience of driving the Essenza SCV12 with a co-pilot while you hold a very impressive Formula One steering wheel with a lot of possibilities to adjust the settings of this race car on the fly.

While nothing opens on these MR sealed resin models, you do get a glimpse of what his hiding underneath the engine cover by looking straight at the rear of the car, as a race car the entire back is very open with a lot of airflow, there are tiny taillights hiding on either side of the rear wing struts, and at the center we find the rain light which gets surrounded by magnificent looking exhaust pipes. 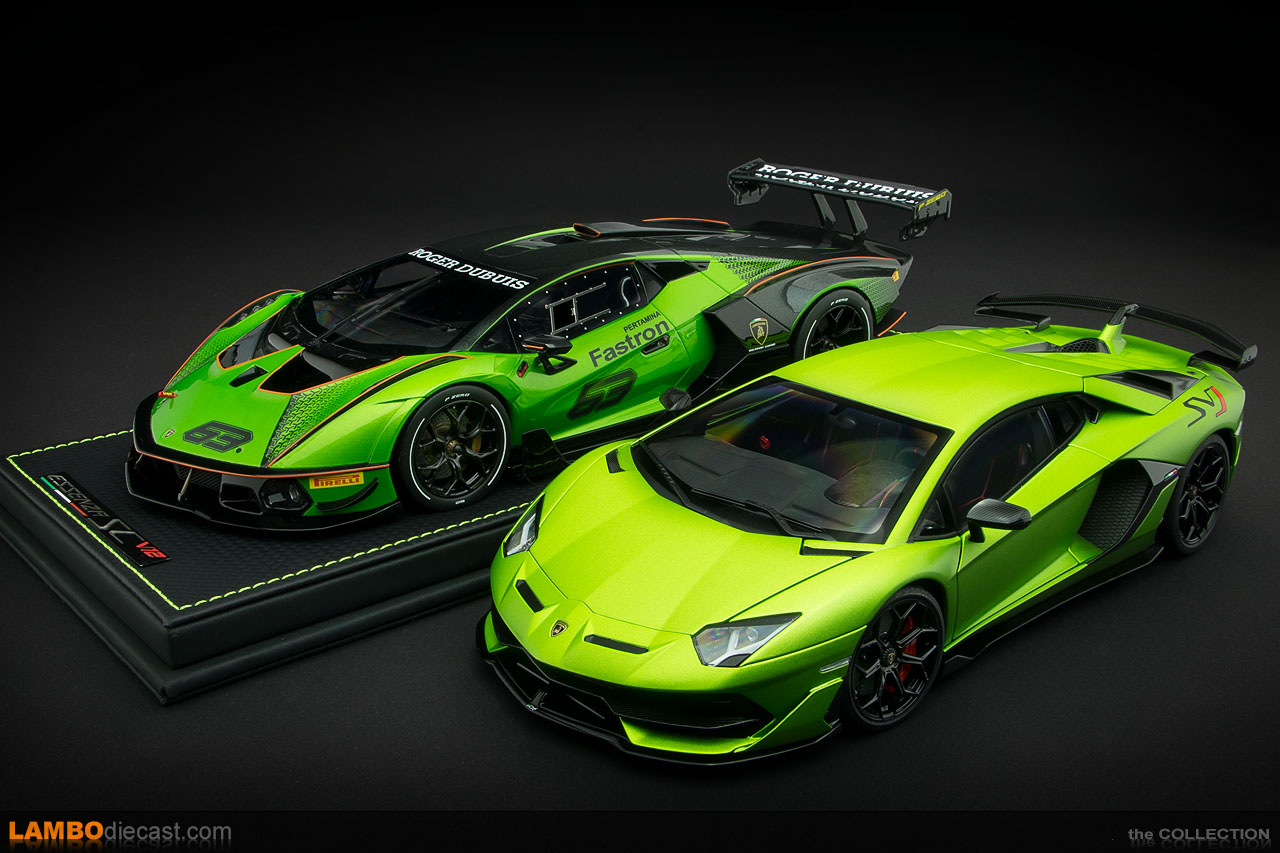 MR did a really good job on this 1/18 scale Lamborghini Essenza SCV12, and yes, these are expensive, and they are sealed, but it's not like I have another choice, MR is the only one making this model, and it's a Lamborghini, so I just had to add it to my collection.