Some might not know about this specific Lamborghini, and today there isn't anything like this built at Sant'Agata, but the Lamborghini Islero from the Sixties was the late Ferruccio Lamborghini most favorite model at the time.

Remember Ferruccio didn't start with supercars in his brand new factory, his first production car was the 350 GT, a Gran Turismo model that was both fast and comfortable with a level of luxury to suit the wealthy businessman, so when it was time to succeed the 350 GT/400 GT 2+2, Lamborghini came up with the Islero.

While the 350 GT and later the 400 GT 2+2 were beautiful cars, the more angular styling of the Islero wasn't appreciated as much, Ferruccio, on the other hand, loved it, only 125 units of the Islero got sold together with 100 units of the improved Islero S, even today neither of the Islero versions has gained a massive value.

The difference between the Islero and the Islero S were immediately visible on the outside, the latter had flared wheel arches and a horizontal vent behind the front wheels, also the door windows now showed a triangular section at the front, a heated rear window, and fog light at the front, but the biggest change happened on the inside.

The complete interior was redesigned from the original Islero, new seats with higher backrests at the front offered more comfort and were finished in leather on the sides with velours inserts in the center, many Islero were ordered with a full leather interior. The rear seat was split by a fold-down armrest, toggle switches replaced the earlier pull units and a glove box was installed on the dashboard, the dials on the dashboard were grouped more logically … still, the major improvement could be found in overall workmanship … the Islero S was just better made than the earlier model … it made this one of the best-looking and best-performing 2+2 on the market back in 1969.

So far I only managed to find a few 1/43 scale models of this less-known classic Lamborghini model, when I saw a 1/18 being listed on one of the online shops I usually browse through, I didn't hesitate and ordered two of them, this silver metallic version and a very nice classic brown metallic, both shades found on these classic GT's back in the Sixties.

I was really looking forward to adding 1/18 models of the classic, somewhat unknown Lamborghini Islero S, even if these Cult Scale Models, a make I never heard of before, were sealed models, so nothing opens, but I'm fine with that, as long as the model is good and represents the real Lamborghini car nicely I'm happy with that. 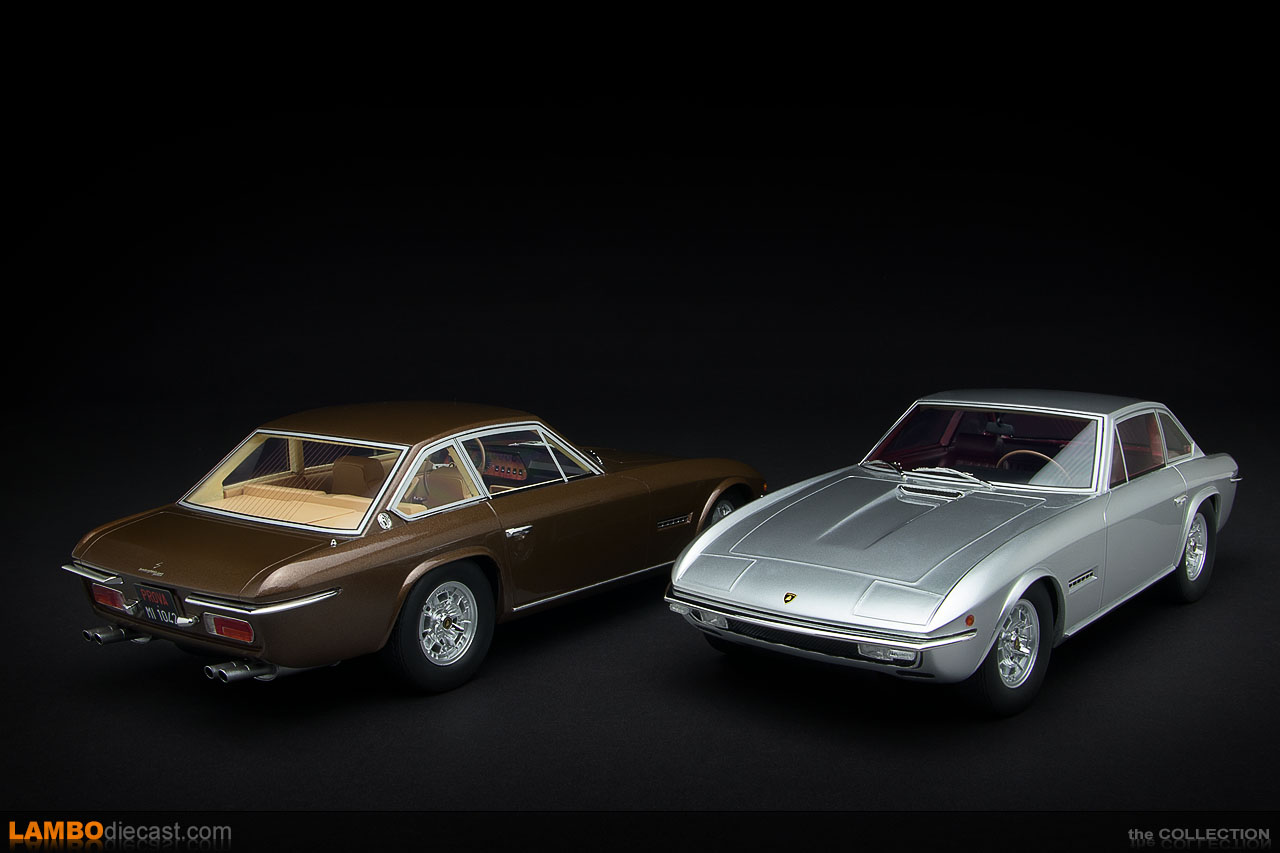 Still, I was a bit disappointed when my big box finally arrived, for starters, something rattled inside the box of the brown one, and that's never a good sign, but more on that in my review of that specific one, but take a look at the box of this model, it's a massive green windowed box, it is oversized for this model, and that green shade looks like it's meant for some agricultural model ... and yes, I see the jokes coming about Lamborghini being a tractor manufacturer, but I mean the box looks cheap just from the choice of colors.

But the box isn't too important to me, the model inside is what matters, so I opened it up and unscrewed the four screws to release the silver metallic Lamborghini Islero from the plinth it's shipped on, but it seemed glued to the studs, very strange, I had to apply some force to release it, and that was only the first sign of things to come.
If you take a closer look at the detail shots I've made for this review you'll notice I did clean the dust, but I left the imperfections on the model, usually, I tend to remove minor things on a model, but in this case, there are so many little flaws I wanted to keep them to show just how mediocre this model is, just as a remark, the metallic brown one is a lot better overall from the two I received.

What I noticed immediately was the fact this silver metallic is very dull straight from the box and had some smears and just seemed dirty, so I took out my compound and subsequently a bottle of cleaning wax which did solve most of that, but I didn't get a deep shine on the paint after all.

I also noted there were some glue strains on the body at multiple locations, they were removed in the previous step, but those things really shouldn't be necessary on a brand new model, on this silver one there's even visible glue at the taillight and the chrome is 'pitted' as they say on a real car, both of mine seem to have the same issue with the chrome on the front grille being not evenly done.

I love the combination of a silver metallic car with a red interior, and that's exactly the combination Cult Scale Models did on this specific one, it's a darker shade of red for the interior, and it looks amazing, complete with a wood look on the dashboard and steering wheel, correct to the real car, even the rear window has the heated lines printed on it, nicely detailed.

I am very happy to finally have a large 1/18 scale model of the classic Lamborghini Islero S in my collection, and after doing a detailing job on the paint this Cult Scale Model does look decent, but it has some flaws I just didn't expect at this price level, remember these are listed at €179 online, if you search around you'll find it cheaper, but even at €149 I still think it's overpriced, seeing as a GT Spirit model is sold at €99, these Cult Scale Models are just worth €99 in my opinion.