At the 1999 Geneva Motor Show Lamborghini unveiled the limited edition Diablo GT, only 80 would be built on this top of the line Diablo model, while this was a street car (albeit not street legal in the US and Japan at that time) Automobili Lamborghini Spa unveiled a track version at the 1999 Bologna Motor show ... the Diablo GTR, also called GT-R in some publications.

While many may think the Diablo GTR is just a stripped down version of the Diablo GT, this is not the case ... the Diablo GTR had a custom made chassis with integrated roll cage for the driver, and that massive, angular shaped rear wing with vertical stabilization fins at the ends had a central mount that was fixed directly onto the chassis for increased strength.

At the rear, the lower bumper seen on the Diablo GT was removed for the GTR version and a more free-flowing exhaust was fitted, still dual pipes, but a lot louder on the GTR, and less restricting which increased power from 575 hp to 590 hp, the side windows were replaced with Plexiglass units including a sliding section and openings for air ducts that were fitted to the exterior rearview mirrors.

The passenger seat was removed and the driver now had a carbon fiber race bucket that was, in fact, wider than the original Diablo GT seats, this required a modification to the central console tunnel too, in the passenger footwell a Momo sourced fire extinguisher was mounted that could be activated by a switch on the central console, to reduce even more weight the airconditioning system was removed together with the insulation between the cabin and the engine compartment.

Apart from the roof (in steel) and the doors (in aluminum), the entire body of the Diablo GTR was made from lightweight carbon fiber, both the front hood and the engine cover held in place by quick release clips required for a racecar, and just in front of the windshield the obligatory 'cut off' switch was fitted, additional coolers for gearbox and differential oil were added together with a racing-spec fuel tank while 18 inch Speedline monoblock, central locking, magnesium wheels were fitted over modified Brembo brakes.

While the Diablo GT production was limited at 80 (in the end 83 were built), the production for the Diablo GTR was even more limited at only 30 numbered units, with the Diablo SVR the owners received a kit to return the car to street specifications, but in case of the Diablo GTR this wasn't the case, the GTR was a true race car that couldn't be turned in to a street legal car later on.

It took me a while to find it many years ago, but I managed to add the stunning 1/18 Lamborghini Diablo GTR by AUTOart in black to my collection, at that time I wasn't as focused on getting the press release livery for my models, otherwise I would have gotten the yellow one instead, but I loved the intimidating looks of a black Diablo back then, later on I also added a 1/18 scale Hotwheels made Diablo GTR in yellow to complete the collection, and while it is a very decent model, the AUTOart is the one to get, at a higher price maybe, but she's worth it.

I have been quietly looking for a yellow AUTOart Diablo GTR to add to my collection for a while now but didn't pull the trigger yet, and now I've heard they will do a new release of this model, so I'm waiting for that one ... and then I learn about GT Spirit releasing a 1/18 scale Diablo GTR ... in yellow!

I already bought both the orange Diablo GT from GT Spirit and her silver metallic counterpart from Kyosho, and I was pleasantly surprised by the quality of those sealed models so I wasn't too worried about getting yet another GT Spirit made Diablo for my collection ... I have no idea when AUTOart will release their yellow Diablo GTR, so I bought this sealed on to admire until I add the AA version too.

The paint on these GT Spirit models is very good these days, I have already admired that on the orange Diablo GT which has a stunningly deep shine to it, and while this Diablo GTR is a rough race car, the yellow paint is amazing, and what's more, it seems to be the correct Giallo shade as seen on the Diablo VT 6.0 of that era ... while GT Spirit made a mistake on their metallic orange hue of the Diablo GT they got it right this time, I have to mention this yellow Diablo GTR has some dust particles in the paint, and a small area on the front bumper where the satin black paint is missing, showing a tiny spot of yellow paint underneath. 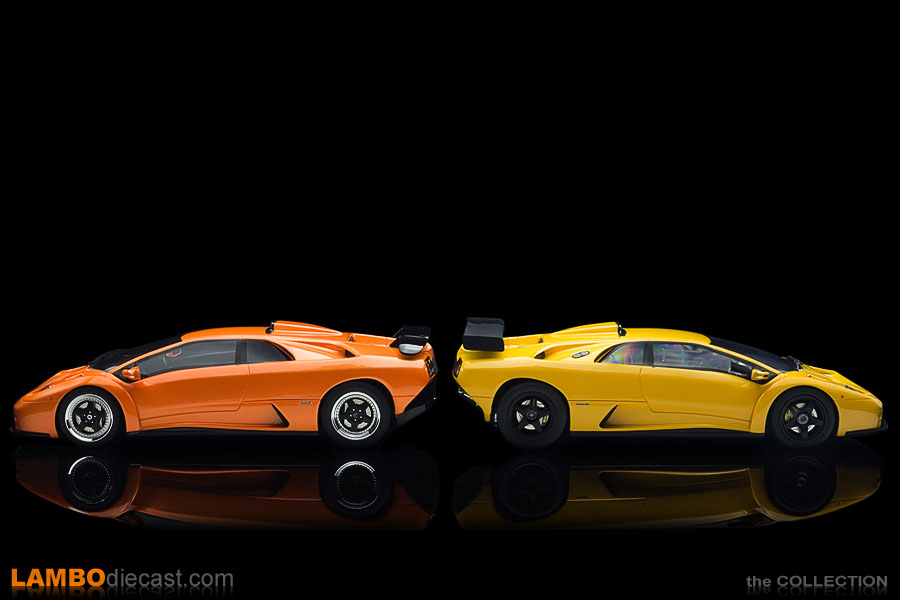 GT Spirit made the correct modifications inside this model compared to their Diablo GT model, the carbon fiber racing seat is there, with a 4-point harness which should be a 5-point version as in the real car, the central console is modified and shows the special buttons and switches and you can clearly see the roll-over cage on the interior and the red fire extinguisher on the floor ... too bad I can't open the door to admire their work even better, but I knew this was a sealed model, so I don't complain about this.

On the exterior, this GT Spirit made Diablo GTR looks really nice at first glance, that massive rear wing looks very impressive and the racing exhaust fiercely points upward ... but there are a few details that could have been done better. For instance the sliding side windows ... similar to the Kyosho made Murcielago R-GT this is a decal, and it's way too coarse and big compared to the real car.

On the real Diablo GTR there is a cut-off switch in front of the windshield, GT Spirit decided to use a simple decal depicting a button, same with the quick release on the front hood and engine cover ... I admit they don't open, but using what looks like a decal to depict these is cutting corners if you ask me ... if I look at their Countach QV with all the amazing details on that model, I wonder if they come from the same company ... the attention to detail is so different.

Now don't get me wrong, this is still a very nice model, with photo-etched, open grilles on most intakes and vents, you can even see the fans behind the large vents at the rear, the quick fuel filler is nicely detailed and the pattern on the grilles seems to be correct to real life, so GT Spirit did pay attention to details, but then dropped the ball in some areas.

The overall stance and shelve presence of this sealed model is simply great and can match any of the higher end models in my collection, and even surpasses some of the other resin Bulls, at  much lower price I might add, it seems these days the GT Spirit/Kyosho sealed resin models are really good value for money ... if you can get one without defects, QC is not at the best level yet, I have a few models that show issues with the windshield for instance ... but not this Diablo GTR, she's as close to perfect as you can get. 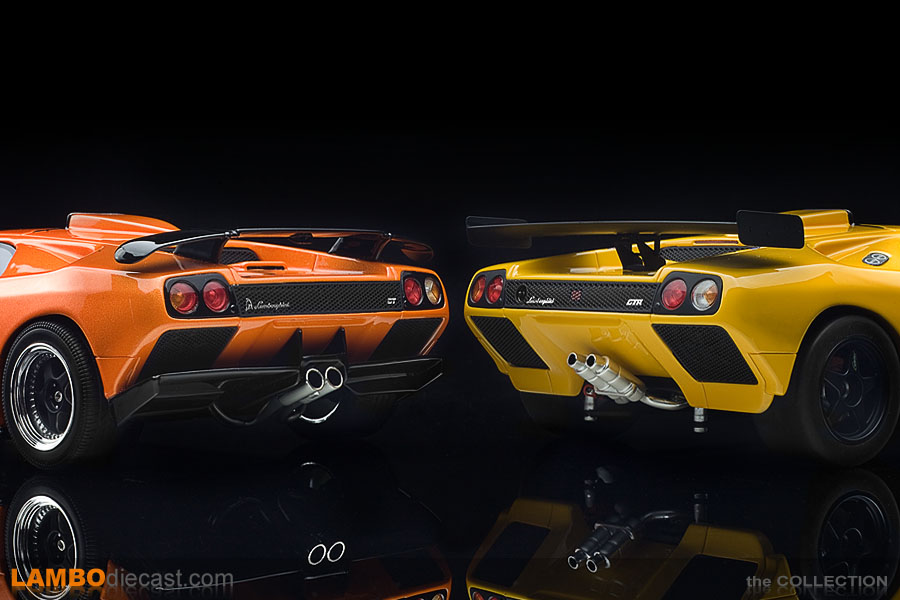 As I mentioned there are a few details GT Spirit missed with this model, sure it's a race car, but that doesn't mean you don't have to pay attention to details, and that's where this model has to bow down for the much better detailed AUTOart version of the Diablo GTR, despite the latter being a very old diecast model by now ... but AUTOart has confirmed they are releasing the Diablo GTR again in the near future, so if you have the patience I can only advice to wait for that one and add the new AUTOart Diablo GTR to your collection ... even while it might be more than twice as expensive as this GT Spirit version.