Back in 1969, the Lamborghini Miura S was introduced, the S stood for Spinto in this case, and the improved Miura came with the brand new Pirelli Cinturato Series 70 tires, but the most important change over the very first models was the use of heavier-gauge steel on the chassis, starting with Miura chassis nr. 125 on (according to Lamborghini records), the metal thickness was brought up to 1 mm from 0.9 mm to avoid flexing at high cornering speeds.

The Lamborghini Miura S or P400 S as it was designated, now came with 370 bhp from the V12 engine mounted transversely behind the two occupants, this allowed the S to reach speeds up to 280 Km/h (173 Mph) ... stupendously fast speed in the late Sixties.

On the exterior the difference between the original Miura and this new S model were clearly visible, the black trim around the windshield and side windows was replaced by chrome on the Spinto, another difference wasn't as visible ... on the headlights, the 'fins' would raise together with the lamp units on the P400, on this new P400 S model only the headlight units themselves would rise up when in use.

When the Miura SV took over the total production of the Miura S was only 140 units, making this version a lot rarer than the previous P400 of which 475 units were built ... still, the Miura is a very rare, and very expensive car today, adding one to your collection in real life will require 7 figures easily.

I was born in the late Sixties, and while I had a Countach on my bedroom wall (like so many at that time) I do appreciate the Miura a lot, so I already own a nice collection of scale cars on this legendary car from the Sixties, one AUTOart Miura SV and several Kyosho made ones, both the original P400 version and the final P400 SV edition together with some of their SVJ models ... but somehow I missed the diecast P400 S from Kyosho in the past. 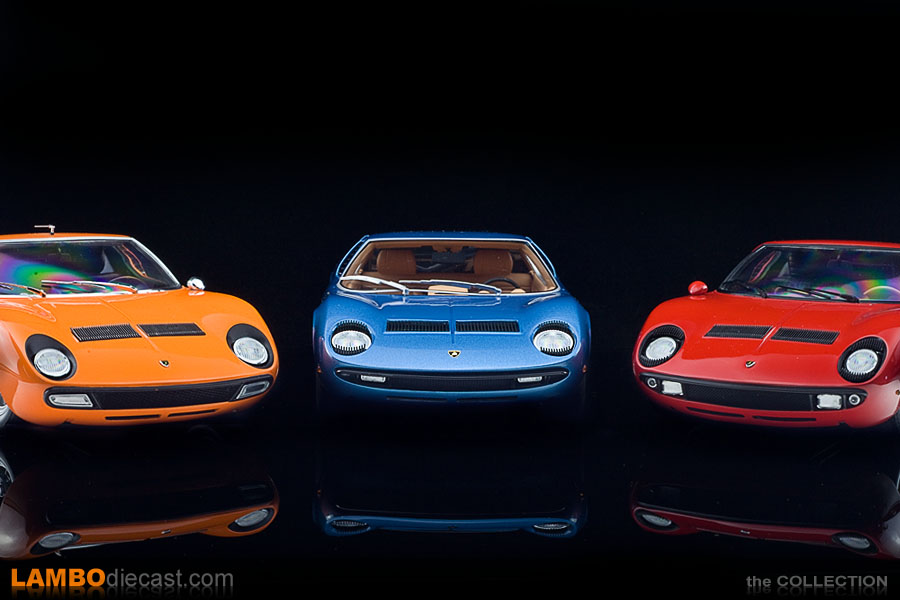 Now I already owned 17 1/18 scale Lamborghini Miura models ... so when I learned about GT Spirit releasing a sealed Miura S model ... I have to admit I wasn't too interested. But then I saw the blue metallic version Kyosho would release, and I eventually put in my order for one of these ... I didn't have a decent Miura S in my collection, neither did I have this nice shade of metallic blue on any of my other Miura models.

So I was happy when the postman delivered the box, I eagerly opened it and admired a very nice, blue metallic (which I think should be the Blu Tahiti shade) paint ... as expected the paint has a very deep shine and those metallic flakes make it sparkle ever so nicely ... I loved it ... until I started looking more closely.

Once again this GT Spirit/Kyosho model passed QC with some flaws, I really don't understand how they could have missed the paint issue on the passenger door and in front of the left rear wheel ... there is a serious paint flaw on the top of the passenger door, somehow there could have been a droplet of water or something there when they spray painted it ... I don't know, it's weird.

But on the driver's side, just in front of the rear wheel, there is a paint chip ... how can you miss that one I ask myself, it's black on an otherwise beautiful metallic blue ... so that was a disappointment, to say the least ... and then things got even worse ...

I didn't notice it at first, but the large rear grille let loose on the right side, probably not enough glue was used, and I can't be sure this was already the case when they checked the model, but the fact remains I'll have to fix that myself ... and I'm not happy about that on a €150 collector's item like this ... still, this is an easy fix, so I'm not too worried about it.

But the worst was yet to come ... the windshield ... yes, once again they managed to mess up the windshield on their 1/18 Lamborghini model, this time the top left corner isn't flush and at the bottom, there is an opening between the windshield wipers ... terrible, and this isn't an easy fix, I would have to take the windshield out to position it again, with the risk of breaking the wipers naturally ... another GT Spirit model with a bad windshield!

So my initial euphory toned down substantially after noticing all those issues, and I don't really like the way they made the chrome trim on the windshield and side windows either, take a closer look at the side windows, besides the silver painted trim (this isn't chrome, doesn't even look like it) GT Spirit/Kyosho put a black surround on the small side windows too ... why? I have no idea. The windshield also comes with a small black trim, but that looks like the rubber that holds in the glass ... remember back in the Sixties these windows weren't glued in place like today ... but on the side windows that black part is way too wide. 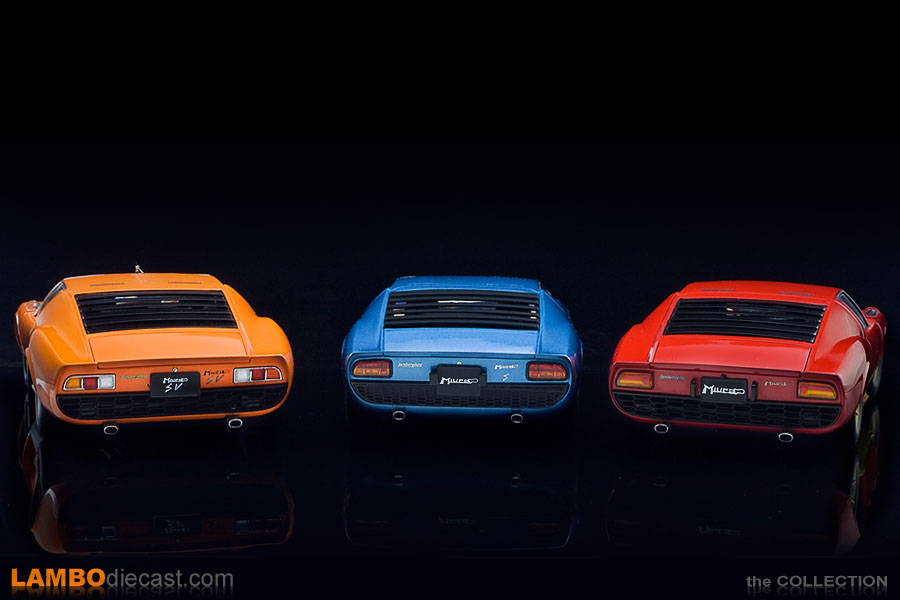 Naturally, I have put this new Miura model next to my diecast models, both the Miura and a Miura S are old Kyosho models, mostly to show the differences between the original P400 model, this S version and the final SV with the wider rear wheel arches and different taillights among other things.

Despite being at least 10 years older, the diecast models are a lot nicer detailed than the new, sealed resin model, I have to admit the paint on this new blue one is amazing, but the crisp details are so much better on the old ones, the windshield wipers are just ridiculous on this new model ... I absolutely love my old Kyosho diecast, Lamborghini Miura ... unfortunately, I can't say the same about this brand new Miura S model by Kyosho.

So should you add this new GT Spirit (they released it in red) or Kyosho model to your collection? A difficult question this time ... with all the flaws and issues on my model I don't feel too good about it, so I can't advise you to get one too, in all honesty I'm looking into adding one of the old diecast Kyosho made Miura S models to my collection now, despite the issue of paint rash on the older Kyosho models. 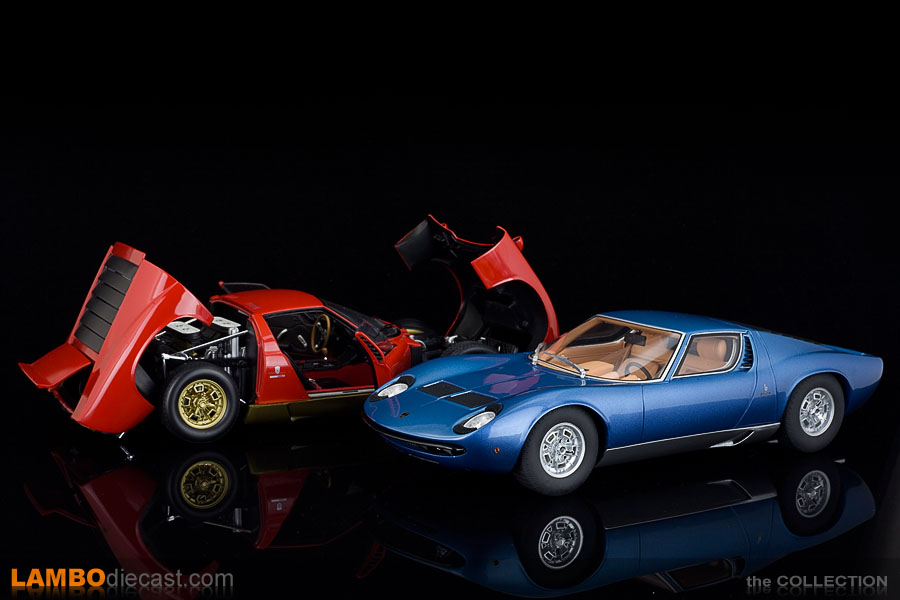 I really wanted to love this stunningly painted, Blu Tahiti version of the Lamborghini Miura S, but at €150 this sealed resin model just isn't good enough, I don't regret adding it to my collection, but I'm disappointed with it, that's all ... at this price point, and their positioning of this model as a collector's item the quality just has to be better.