Back in December 2017, Liberty Walk unveiled the first renders for an LB-Works Aventador Limited Edition kit, as before, this was a kit with four wide fenders to be added onto the Lamborghini Aventador base car, but unlike the normal LB-Works widebody, this new, much more aggressive styled edition would be a limited production run only, 30 units for the Japanese market, and 20 units for the rest of the world ... and by the time you are reading this review they are sold out as far as I know.

The first Lamborghini Aventador to showcase this LB-Works Limited kit was finished in satin silver over a red interior, the car even came to Europe to be shown at the 2018 Geneva Motor Show, and it's the 50/N22 number, a version AUTOart will be releasing in a few months, as this black and gold one over a black interior was the first to be available from AUTOart in 1/18 scale, red, blue, silver, and a white Martini livery are still to come in the first batch of five colors, all amazing in their own right.

But back to the LB-Works Aventador Limited Edition, a kit that had an MSRP of $60,000 if you wanted the carbon fiber version, only $55,520 if FRP was good enough, but as already stated, I don't think any of the 50 kits are still available, hence why Liberty Walk now has the LB-Silhouette WORKS Aventador GT Evo kit, and it's even wider and again more aggressive. 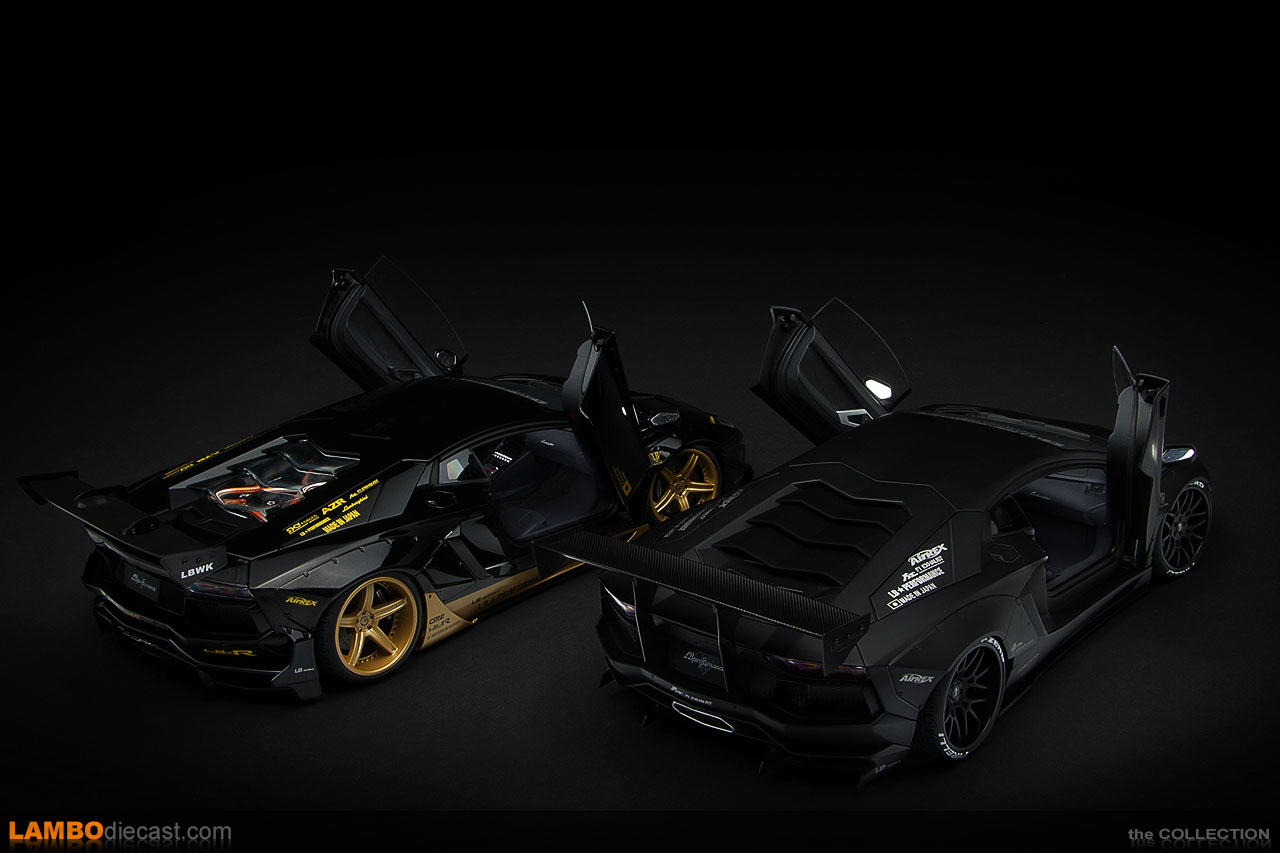 So how does this new AUTOart 1/18 scale model compares to the real car, and the earlier AUTOart LB-Works Aventador model released a few years ago? The answer to the latter question is easy, it's even better as this new model comes with an opening front hood and engine cover, while the first LB-Works Aventador from AUTOart only offered opening doors, so that was a slamdunk from AUTOart to go for 'fully opening' as they call it.

But comparing this glossy black on gold rockers and gold wheels to a real Kato-san car is easier said than done, I couldn't find photos of the real car for this model, so I'll have to compare it to the LB-Works Aventador Limited I have photos for. 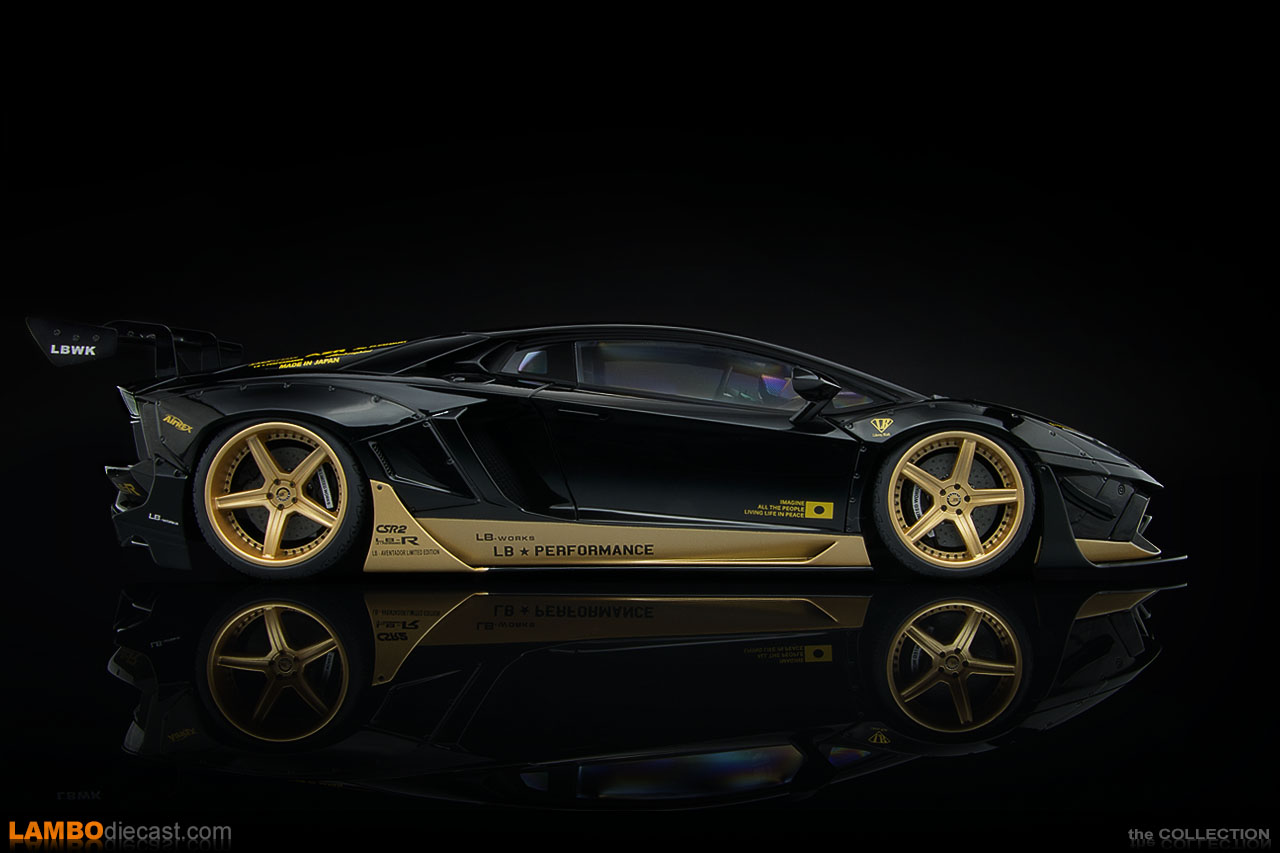 The wheels on this black and gold version are known as Sky by Forgiato, Forged S201, they are also used on the all-blue version, and in real life on the red Miura Homage LB-Works limited, which AUTOart is sadly not replicating, note that both the silver and the white Martini livery cars come with Forgiato wheels, hence they should feature different decals compared to this black one.

And that brings us to the decals, of which there are plenty on this LB-Works Aventador Limited Edition, and as far as I can determine, they look correct, but it's difficult to compare to the real cars, as there are 50 of these made, and I couldn't find an exact one for this model, I'm going to state that the decals look fine.

You have the traditional 'imagine all the people living life in peace' on the doors as they usually fit, and there are a lot of 'LB-Works' decals, LB-R, Airrex, and several others all over this model, on the shoulder-mounted air intakes we get the 'made in Japan' line, together with Sky Forged, AZR, FI Exhaust, accompanied by the Lamborghini script and LB Performance.

At the front, near the headlights, we find the LB-700 R Limited Edition decal, while on the other side we should be seeing the serial number for this specific kit, 50/Nxx ... but AUTOart took a different approach, they just fitted 50/N00, so you can't determine which of the 50 cars this one should be, let's see if they do the same on the other shades. 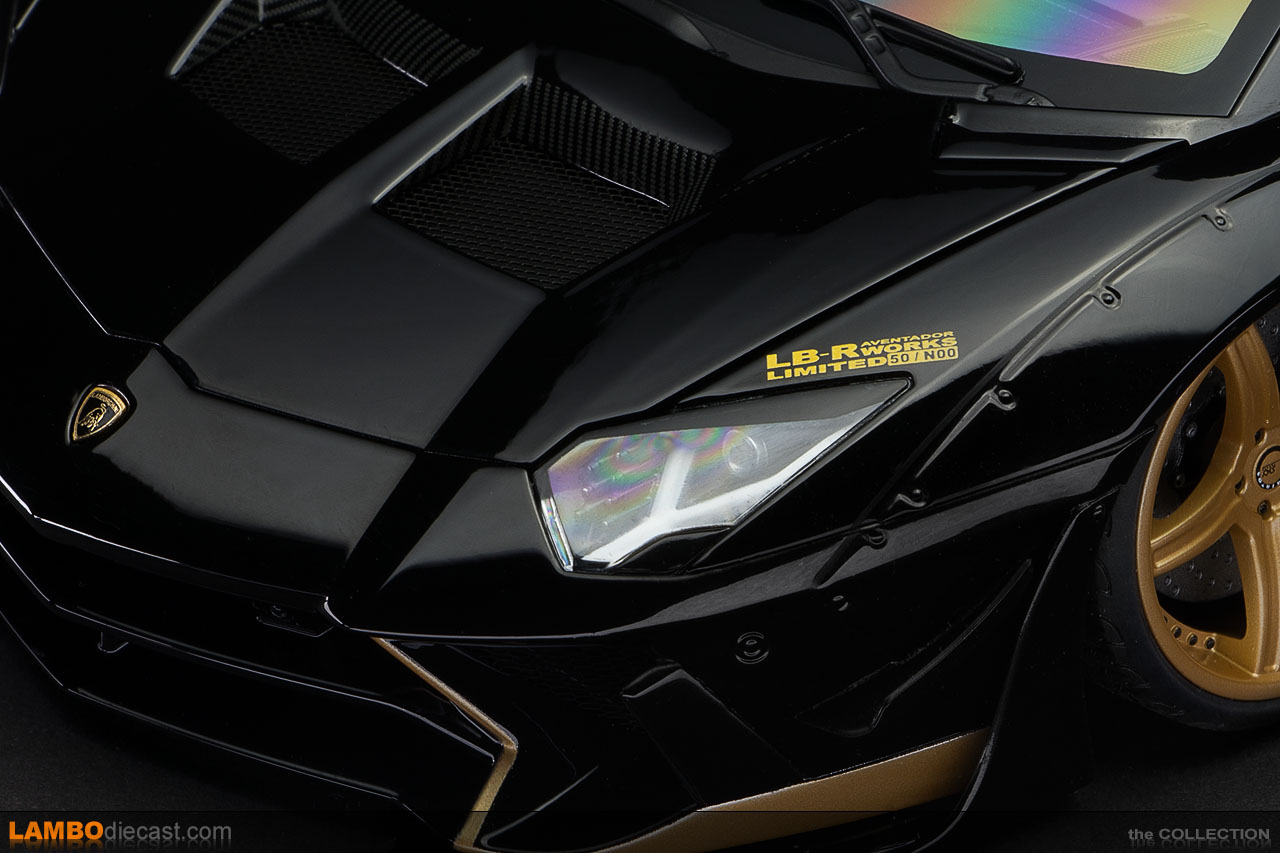 I have to admit I was a bit worried about the wheels on this AUToart model, on several photos I've seen online, the wheels had a very plastic look to them ... but that was unfounded as I was positively surprised when I opened my model, the wheels look like the real ones seen on the Miura Homage car, which was 50/N02 by the way, unfortunately, this specific shade from AUTOart does not come with those impressive Pirelli scripts on the tires, but if you look closely, you will notice LB-R Limited Works on the brake calipers.

Some of the other shades AUTOart will release over the next two months will come with some amazing interiors, sadly this black on gold version has a plain black interior, a bit bland, but it does come with the carbon fiber interior option, which is shown on the central console, the door panels, and the dashboard binnacle. 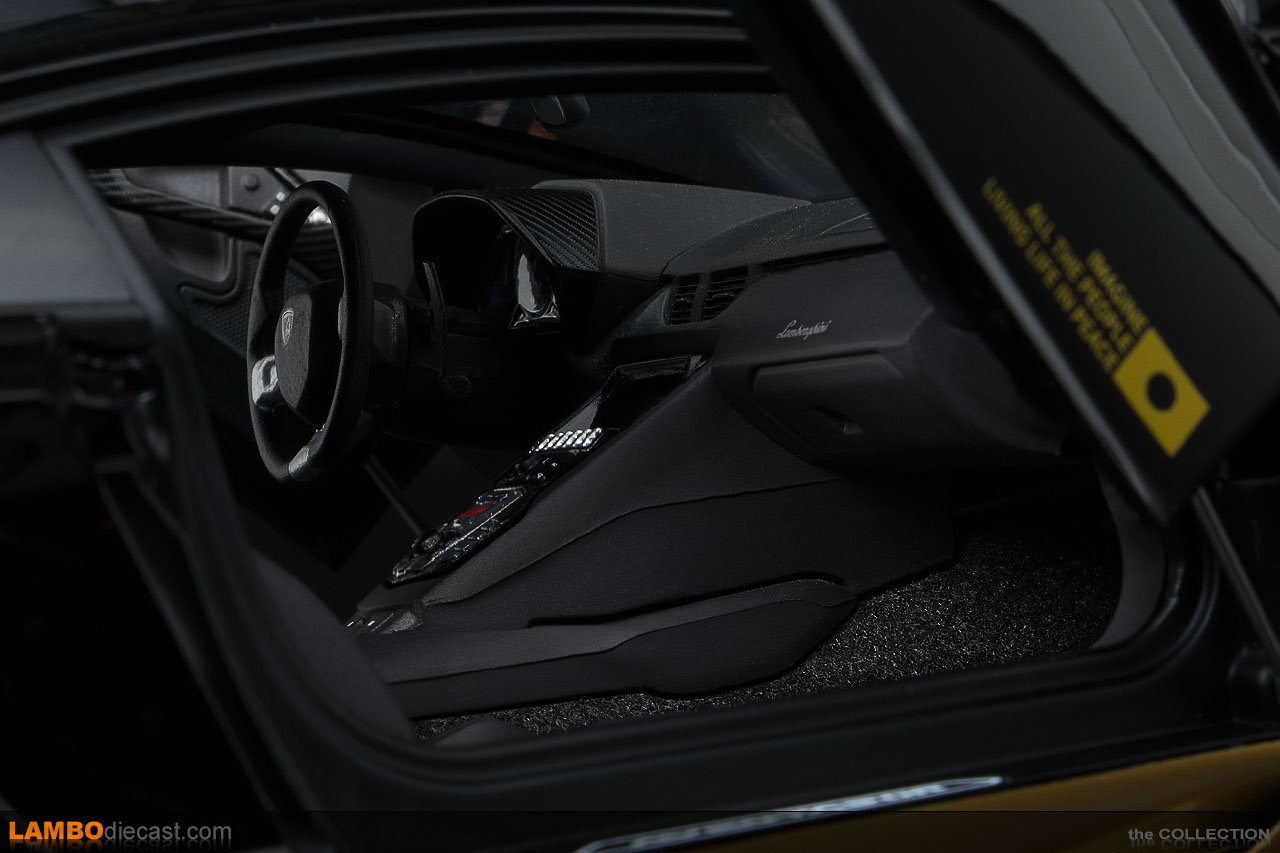 The one thing that I was a little disappointed with is the cross-brace over the engine, I know it looks like this one the real cars too, a kind of burned titanium look-alike I guess, but that part does look like plastic on this AUTOart model, which is a shame as the rest of the V12 engine is nicely detailed, that cross-brace lets it down a little, but other than that I like this model, under the front hood you'll find the air tank for the Airrex air-ride suspension with some hoses to mimic the ones going to each wheel on the real car, it's a nice detail. 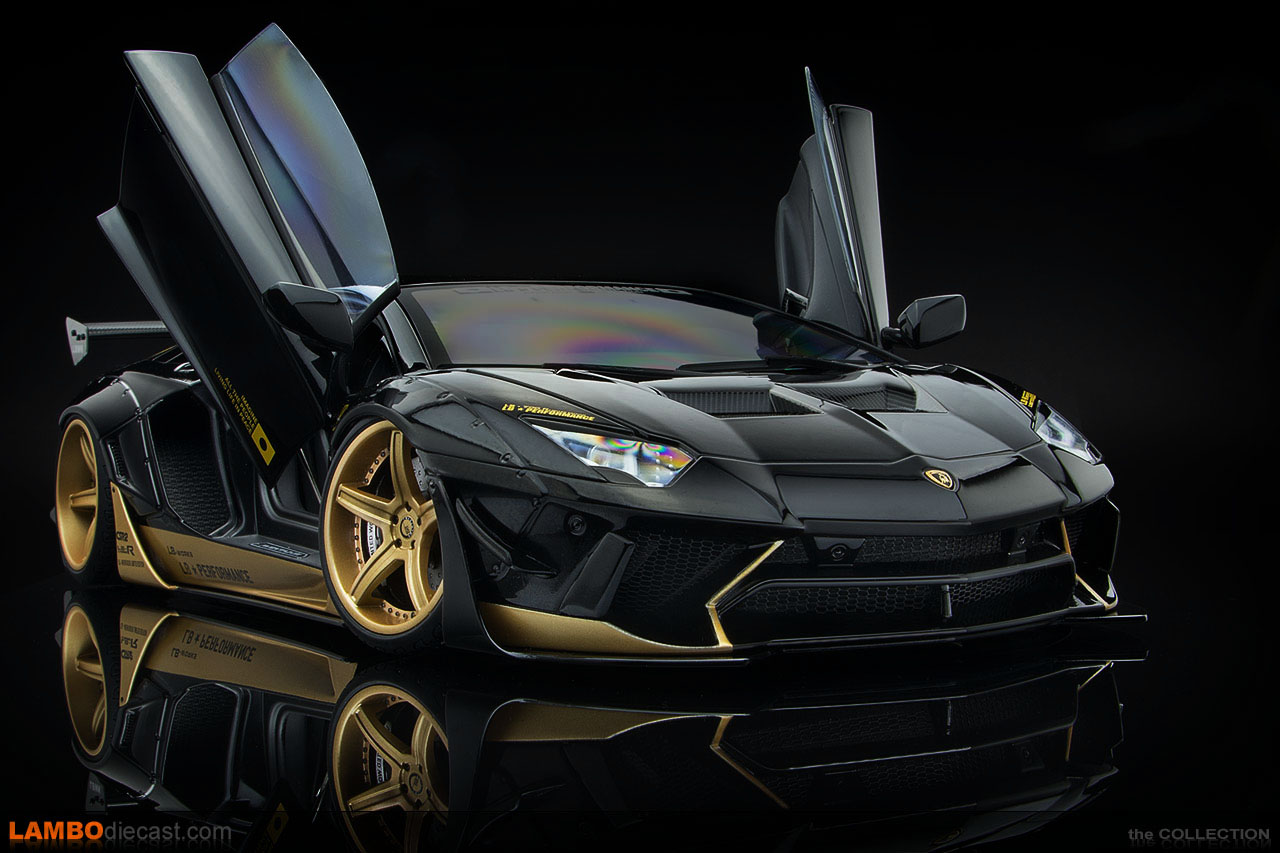 Some stated the front hood has fake grilles, and that those openings aren't real vents ... well, that's how it is on the real car too, if these were open vents with grille inserts, everything in this luggage compartment would get wet when it rains, and with the air-ride stuff in there, you'll be looking at a short-circuit very quickly, so the underside of the cover is closed, just as it is in real life.

Personally, I like this color combination, black and gold always works nicely together, so I just couldn't resist adding this first version AUTOart released, I will be adding the satin silver metallic too as it is the 2018 Geneva Show car, but if you are looking to add only one of these LB-Works Aventador Limited Edition models from AUTOart, this black one might be the one to get. 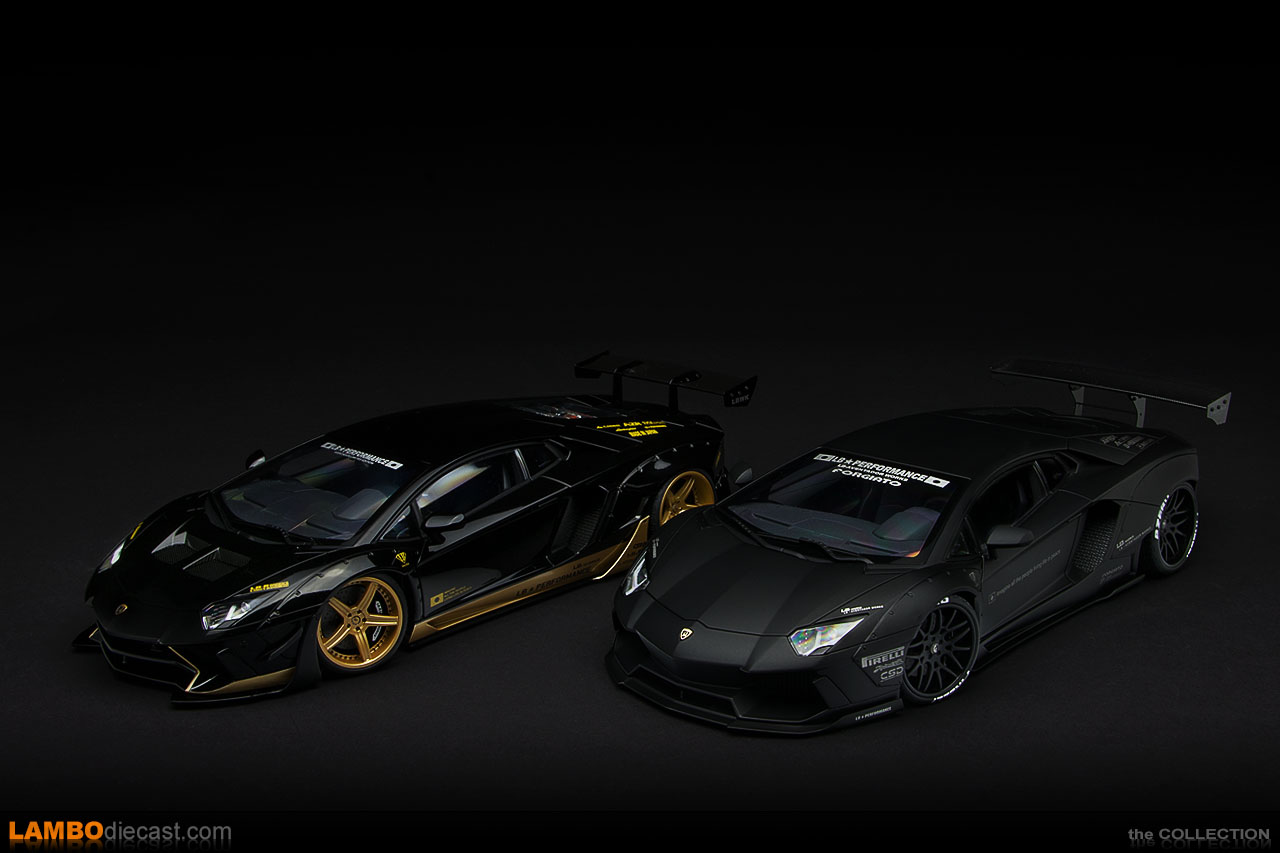