Automobili Lamborghini SpA made their first car, the 350 GT, back in 1966, that car evolved into the 400 GT 2+2 with a similar design, the first real change came with the Islero in 1968, much more angular styling, but still a front-mounted, 4-Liter V12 engine and 2+2 seating ... a true GT, Gran Turismo, just like Ferruccio Lamborghini wanted to build in those days.

Then came the large Lamborghini Espada, still a V12 in front of the driver, but a 2-door with four seats, an amazing car, that would become the most successful Lamborghini for the next decades, and Ferruccio decided he could use the same chassis, shorten it a little, and create another 2+2 model ... that became the Lamborghini Jarama in 1970.

The Jarama was shown at the 1970 Geneva Motor Show, and this car was designed by Marcello Gandini, yes the same artist who gave us the Miura, the Countach, and the Diablo. The Jarama body panels were made by Bertone with assembly at Carrozzerio Marazzi, who also built the Islero by the way, this new 1970 2+2 became the last front-engine V12 GT Lamborghini would ever build.

The design of the Jarama showed very nice, flared wheel arches, two NACA ducts on the engine cover (inspired by the Espada hood probably), a small winglet integrated into the rear edge of the roof and an overall hatchback look, do note however that there was no rear hatch but only a rather small luggage compartment cover that opened up into a 250-liter large space … for even more luggage space the rear seats could be folded down.

One of the most characteristic features of the Lamborghini Jarama was the four, large headlights installed behind fold-down covers … unlike the pop-up headlights on the Islero or the exposed lamps on the Espada, the Jarama used a totally innovative way to hide the headlights when not in use. The design of the front looked very clean and aerodynamic during the day, but when the headlights were needed small electric motors would tilt down the covers to reveal the quad setup.

Most sources state the side vents behind the front wheels on the fenders were a Jarama S feature, but this doesn’t seem to be completely true, they have been fitted to the Jarama GT too, most likely the last 60 units built received them at the factory before being delivered while several early Jarama were retrofit with them to avoid overheating.

Over a period of two years, a total of 177 Lamborghini Jarama were built before an improved Jarama S was unveiled at the 1972 Geneva Auto Show, sources state a total of 20 Jarama were delivered with the dual sunroof option (18 of them sold in the USA) and six left the factory in RHD configuration.

While Jarama is a famous Grand Prix track near Madrid in Spain, in case of this Lamborghini the name refers to a breed of some of the fiercest bulls in Spain, bred by Don Manuel de Gavaria in La Mancha, they pastured near the Jarama river in Titulcia.

I already had several Lamborghini Jarama scale models in my collection, but all of them were the small 1/43 scale, until now, CMF released this striking blue metallic over brown leather interior Jarama in my preferred 1/18 scale, only 300 units are made, and I put in my order for one as soon as possible, to avoid having these sell out too quickly.

It seems CMF choice to replica was a late model Jarama, still with the Miura style, knock-off wheels, but already with the black side vents on the front fender, strangely enough, there are no rearview mirrors on the doors of this model, usually there would be a small, chrome bullet-style mirror installed, but I have seen real Lamborghini Jarama without a mirror before, so it's not a mistake. 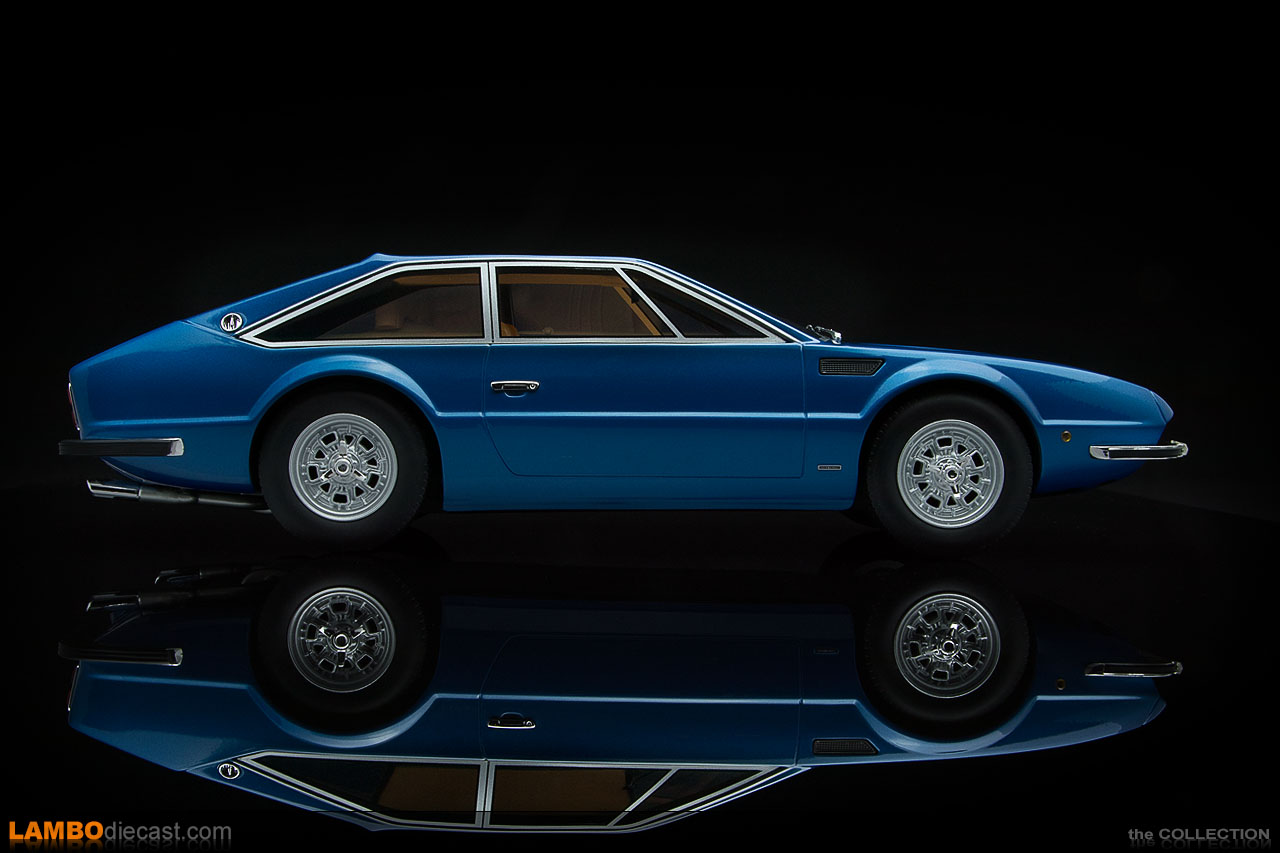 This CMF 1/18 scale model of the Lamborghini Jarama comes with chrome bumpers, and clear front indicator lenses, several Jarama had their bumpers finished in black, and depending on the market, there would be orange indicator lenses ... but still, this CMF setup does exist in real life.

Just like at the rear, some Jarama came with rather large license plate lights, mounted next to the plate holder, the CMF one uses lights on top of the rear bumper, just as many real Jarama would, and there is no Raging Bull logo on the rear fascia between the taillights, just 'Lamborghini' and 'Jarama' on the right side of the license plate.

I have to admit the dual exhaust on this CMF looks a bit plain, there could have been a lot more, finer detail at this point, and that also goes for the side window trim ... this was the Seventies, so chrome trim on all windows, CMF went for silver paint instead, and on the sides specifically, the trim is rather bulky, a missed opportunity if you ask me.

Fortunately, there are windshield wipers, and they are the correct design, two blades, and they rest in the middle, just like on the real car, and there are even two water jets for the windshield, the chrome door handles are nicely detailed and so is the Lamborghini crest at the front, it's a bit too raised, but it still looks good anyway.

There is no antenna on this CMF scale model of the Jarama, but then again, not all real Lamborghini Jarama came with an antenna, many didn't even have a radio ... which this CMF one doesn't have either in the interior, and talking about the interior, I love this shade inside a metallic blue car, a warm tint of brown, not too light, not too dark, just right.

CMF tried to replicate a wooden steering wheel ... they failed, it's just a dark brown, plastic-looking steering wheel, but it comes with chrome spokes. It seems they were able to use lots of chrome, just not on the window surrounds, unfortunately. And it has to be mentioned CMF installed the correct dashboard and steering wheel inside their scale replica, both changed with the Jarama S.

The dashboard inside this CMF model shows the correct design, complete with the switches behind the steering wheel, and the wood pattern around the dials ... it's all a bit less finer detailed than some of the more expensive models, but it's there nonetheless.

So there's good news, and bad news about this model, the good news is that this is the only 1/18 scale model of the Lamborghini Jarama model in existence, and it's a nice color combination. Overall it's a nice looking model, and it has a really nice shelve presence, I have it on display next to my blue Lamborghini Espada from AUTOart and the blue 400 GT 2+2 from KK-Scale ... and it fits perfectly.

So what's the bad news then? I have heard from fellow-collectors their model came with serious window problems, the side windows were bulging, the rear window came loose in a corner, it's the typical issue we've seen with resin models before, but it's still something to keep in mind.

And for some that is also bad news, this is a sealed model, nothing opens, you can't get a really good look at the interior (the windows are very clear, but also flimsy, so be careful handling this one), and there is no chance to admire that massive V12 engine hiding at the front.

Personally, I feel it's a little overpriced at €169, it's not really any better than my KK-Scale 400 GT 2+2 models, it's not even close to the AUTOart Espada model, and for me, this should be a €99 model all day long, so do I regret buying it in the end? Not at all, I love it when these older Lamborghini models get build in a 1/18 scale, and if they would release another shade, or the Jarama S version, I would buy it in a heartbeat ... and still feel it's overpriced.