The Lamborghini Terzo Millennio was unveiled in late 2017 as a design concept, it would have been great to see a production model inspired on this amazing looking car, but that sadly never happened. The Terzo Millennio was created as a test-bed for future technologies, this wasn't a hybrid, but intended as a fully electric model with an electric motor behind each of the four wheels.

The Terzo Millennio didn't use conventional batteries either but went with supercapacitors ... that's right, the same type of storage we later would see on the Lamborghini Sián hybrid model, even better, the Terzo Millennio bodywork was made from an evolutionary carbon fiber ... which can self-heal and store energy as an accumulator. The structure of this body would contain micro-channels filled with healing chemistries that allow the body to repair itself to avoid further cracks in the carbon fiber structure.

We all know the current Lamborghini Aventador will be replaced with a hybrid model, just like the Huracan, but the car after the Aventador successor might be fully electric, and it is this car the Terzo Millennio was intended to show a glimpse of ... and if this is what the future looks like, I'm not complaining.

I was actually waiting for another company to create a 1/18 scale model for the Lamborghini Terzo Millennio, so I didn't order the MR version right away ... but it turned out nobody was going to make this one of a kind Lamborghini so I had to get the expensive MR version before supply ran out I got into the same issue as with the Egoista, I still don't have a 1/18 scale model of that beauty, and by now the prices for the MR version are ridiculously high. 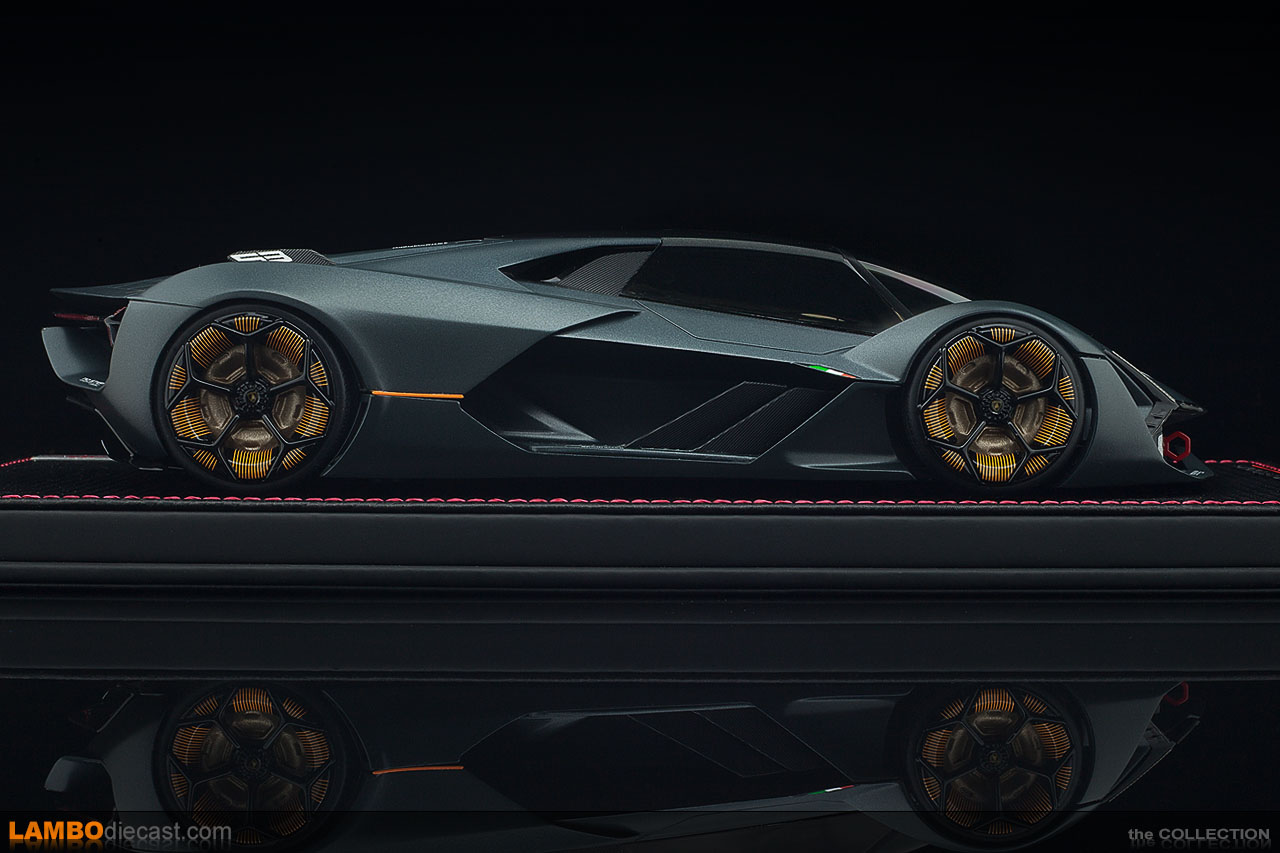 So I paid the high price for one of these sealed MR resin models of the Lamborghini Terzo Millennio, and naturally, it looks absolutely beautiful and just about spot on as we might expect from MR, now keep in mind the real car is a concept, and a static one to be more precise, so it doesn't drive ... it does come with working lights, however,so it's a rather impressive, very low riding, hypercar concept.

The MR scale model invokes the same impression, very low and wide, with massive, open air vents and outlets, at the rear you can actually see large parts of the tires through the diffuser, and while the Sián now shows vertical fins with '63' written on them, the Terzo Millennio already had those in 2017. Being a fully electric hypercar there are no exhausts to be found, and because the four motors would be built into the wheel hubs there is a lot of open space all around the design of this car.

The Terzo Millennio concept also introduced the large Y shaped LED up front, a design that would be used on subsequent models later on too, the Terzo Millennio also had Y shaped taillights by the way, and a large, vertical brake light in the center, also note the dual LED headlights deep inside the front fenders and the bright red, track-inspired rings in the front bumper ... complete with ALA mind you.

Naturally, there is a lot of visible carbon fiber on the exterior of the Lamborghini Terzo Millennio, and MR managed to replicate this very nicely, it looks amazing on this scale model, MR even inverted the weave from left to right on either side of the model, very nice attention to detail. 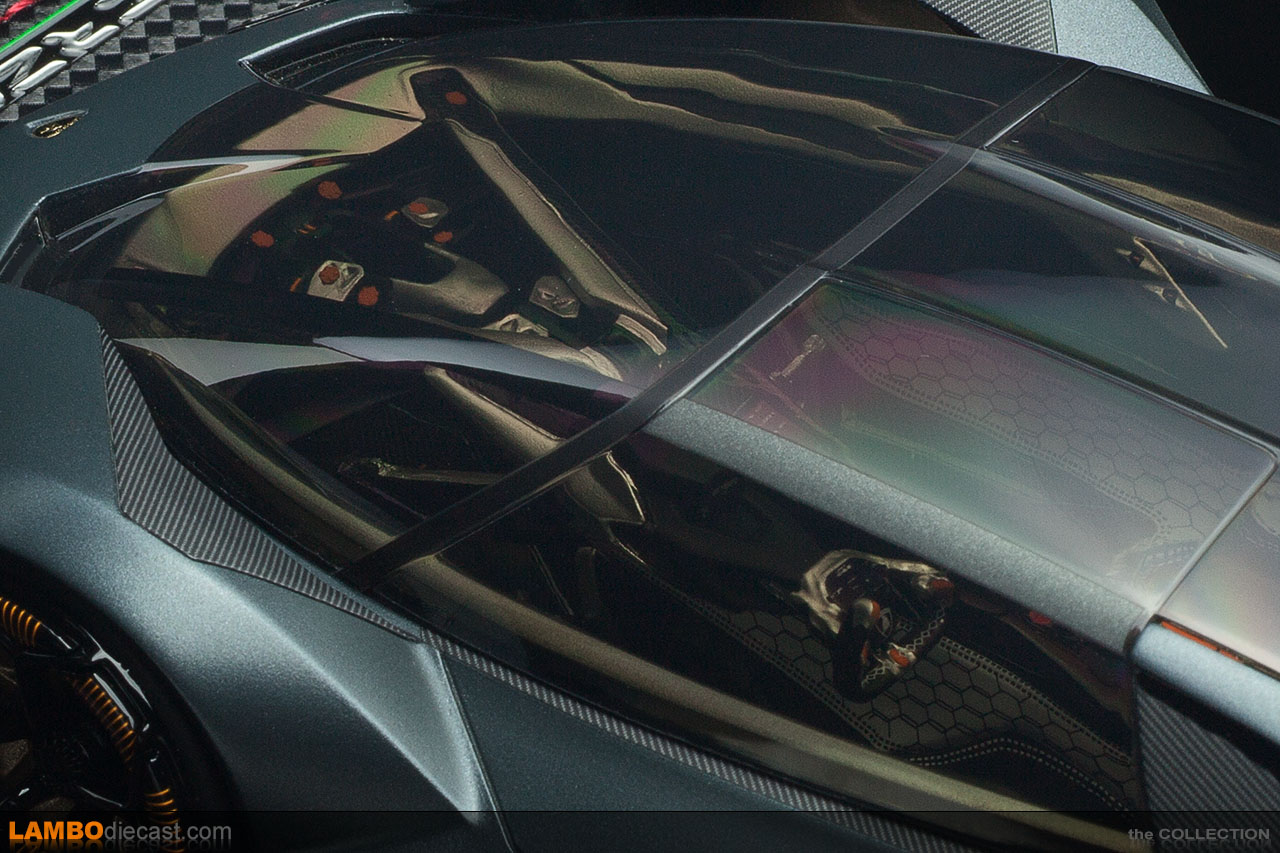 The interior is where MR really made a difference, sure the model doesn't feature any opening parts, and despite the glass having a dark tint, you can still see the very futuristic interior of the Terzo Millennio inside this MR model ... which is rather special in the end. I've been told Mitja Borkert, the director of the Centro Stile Lamborghini actually had to design an interior specifically for MR/Looksmart for these scale models ... the real Lamborghini Terzo Millennio doesn't have an interior, the windows are completely blacked out so you can't see inside ... but there is nothing behind the windows.

If you look closely at some of the virtual renders on the Terzo Millennio you can see a hint of an interior, but on the real concept model there is nothing, but for the scale models from MR and Looksmart they insisted on having dark windows, but still a very sci-fi interior ... just note the position of the steering wheel, with an open top, and you can even see the cross-stitching on this wheel, but also the hexagon stitching pattern on the seats has been recreated ... all very nicely replicated by MR, I for one really love it.

So the usual question is ... should you add this model to your collection? This time it's a difficult one, for me the Terzo Millennio is a must-have, it is part of the history of Lamborghini and surely a glimpse of the future ... and I really love the design of this concept, so I just had to add it to my collection.

But I also understand it's not a production model, it will never be seen driving on the road, so it might be of no interest to other collectors, and being an MR it sure isn't cheap either ... value for money perhaps, but not a bargain in any way, so I would say it should be part of a Lamborghini collection, but not really a must-have for a supercar collector in general.

But did MR make a flawless model of the Lamborghini Terzo Millennio concept car? Not really, there is one mistake on this model ... well not really a mistake, more an oversight I think. If you look closely at the windshield of this MR model you'll see it is a one-piece unit that goes all the way up to the A-pilar without interruption ... and this is consistent with the virtual renders of the Terzo Millennio ... however, on the actual full-size concept car, there is an interruption to be seen where the vents in the front become flat. 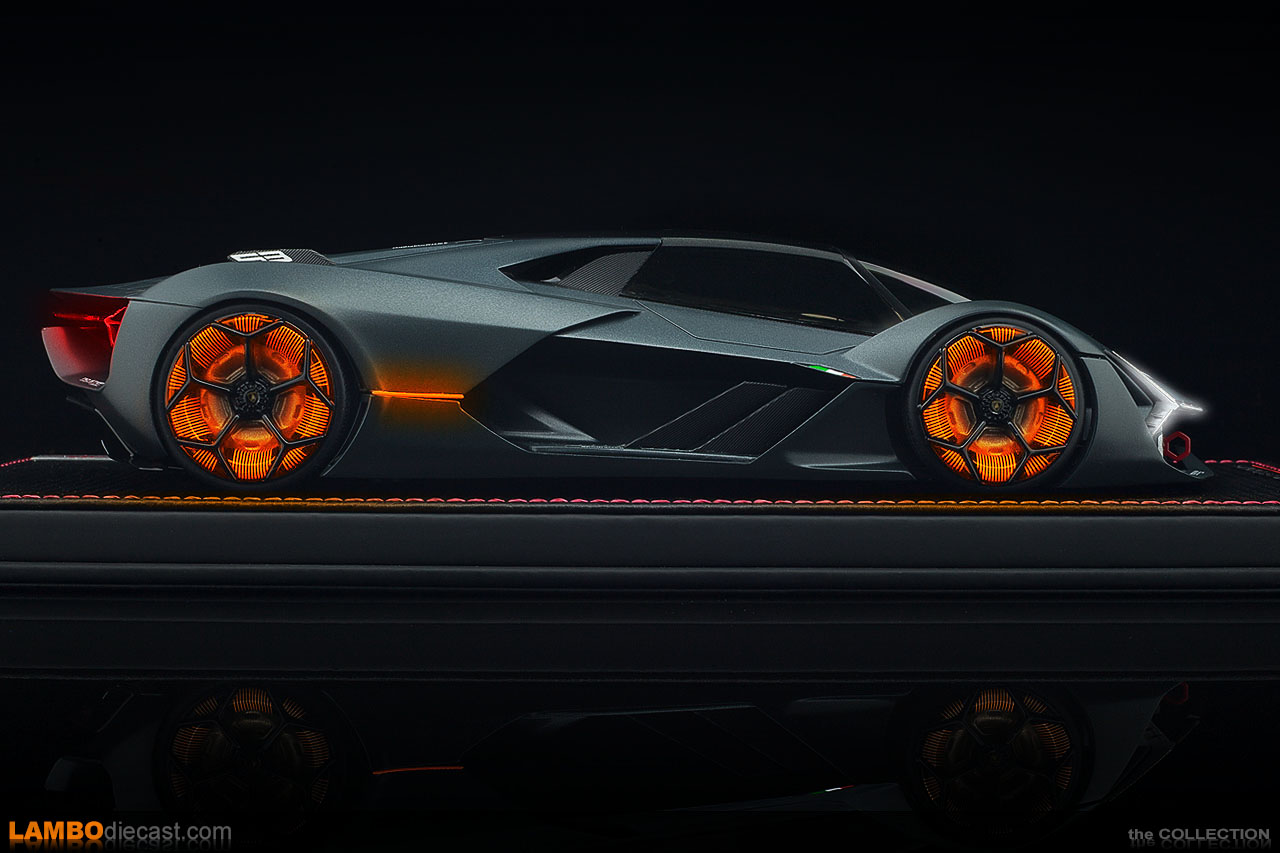 But other than that, this MR model is just about perfect and I'm very happy I decided to add it to my collection, I admire it almost every day as it's is on display in my living room ... it's a prized asset for me and I love it.