The Lamborghini Huracan Performante was introduced at the 2017 Geneva Motor Show in Switzerland, the long-awaited, lightweight, top of the line V10 model from Sant'Agata was unveiled in a brand new shade called Arancio Anthaeus, a satin metallic orange, slightly more saturated than the well-known Arancio Borealis.

Lamborghini called this new evolution 'Sculpted by the wind', and the Performante did come with a totally modified body at the front and the rear, introducing ALA on the Huracan, the Aerodinamica Lamborghini Attiva ... or active aerodynamics to us. Special flaps in the front bumper and rear wing allow a difference in downforce and drag to reach higher top speeds and better cornering, all controlled by a computer.

Power output went from 610 hp to 640 hp on the Performante while a weight reduction of 40 kg helped to reach a new world record for production cars at the famous Nürburgring in Germany, the new Lamborghini Huracan Performante managed to set a time of only 6:52.01 on the Green Hell.

The new front bumper for the Huracan Performante features some massive air intakes and an innovative 'fin' design in body color, while some parts are finished in a gloss black (an option by the way) the more special parts on the Performante are finished in Forged Composite, like the midsection of the front bumper with the adjustable flaps, at the rear a large part of the new diffuser holding the two massive exhaust tips ... and that high rising rear wing. Presumably, they used Forged Composite on those parts because it allows the creation of more complex forms when compared to carbon fiber.

The glass engine cover is also bespoke to the Huracan Performante as it holds two air intakes at the end that direct air into tunnels behind the engine that are connected to duct inside the rear wing, at the bottom of the aerofoil you'll be able to notice flaps that can be opened or closed as part of the ALA system ... very impressive to look at.

The side sills on the Performante are finished in gloss black (optionally) while the famous Italian Tricolore decal is back on the doors ... it can be omitted as a special request, Ad Personam option by the way, just like the small 'Performante' script on the door near the front wheel.

Speaking about wheels, two new designs were introduced for the Lamborghini Huracan Performante, the cross spoke design is called Narvi and is available in either glossy black or a satin bronze while the new Loge wheel comes with a center lock fitment, inspired by racing and available in glossy black ... both designs are an option as the double five-spoke Mimas comes as standard, but not many Performante left the factory as a standard model.

On the inside the love for the new Forged Composite material comes back in to view, on the dashboard-mounted air vents, on the central console and on the door panels ... do note however that the Gallardo Superleggera came with a full carbon fiber door panel, on the Huracan Performante only part of the door uses Forged Composite, not the entire panel.

You can have the light-weight, carbon fiber seats inside your Lamborghini Huracan Performante, but the normal comfort seats are still available too, not every owner was happy with the hard, narrow sport seats so several Performante (and Aventador SV) were ordered with electric comfort seats instead.

It took AUTOart about two years to have a 1/18 scale model of this ultimate Huracan model ready, and while as usual MR had their 1/18 version available shortly after the introduction in 2017 I decided to wait it out and get an AUTOart model instead ... but my patience was put through the test as AUTOart didn't release this very special Arancio Anthaeus version as their first shade, instead, the very nice Blu Cepheus was produced initially, so I had to wait even longer. 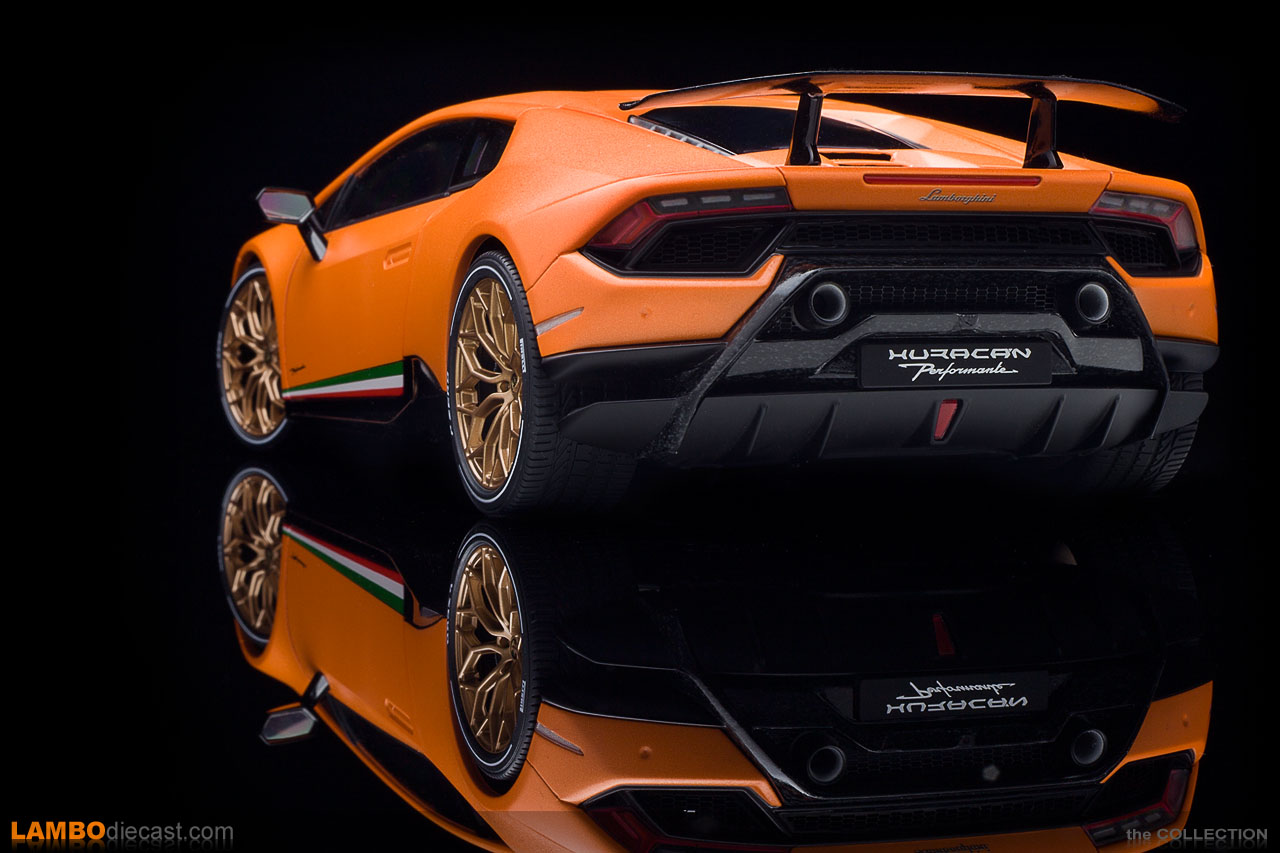 But it was worth the wait ... this is a masterpiece, a stunning replication in 1/18 scale of a very impressive car in real life, the moment I opened the styrofoam box protecting the AUTOart model I was impressed with the paint, it isn't easy to have a satin top coat on these models ... but AUTOart nailed it, I do like the Bianco Monocerus livery too and the Verde Mantis looks great with the Loge wheels ... but in my opinion, this Arancio Anthaeus is the shade to go for on the Lamborghini Huracan Performante by AUTOart.

The mix of Forged Composite and glossy black used on the Huracan Performante by Lamborghini has been replicated perfectly by AUTOart, especially on the rear diffuser, which is an intricate combination of gloss black, forged composite and satin black is spot on, also the two exhausts, which are black in this case, is just as seen on the real car, even the Lamborghini script at the back is finished in black while the third brake light is no longer a decal as seen on the initial LP610-4 model from AUTOart. 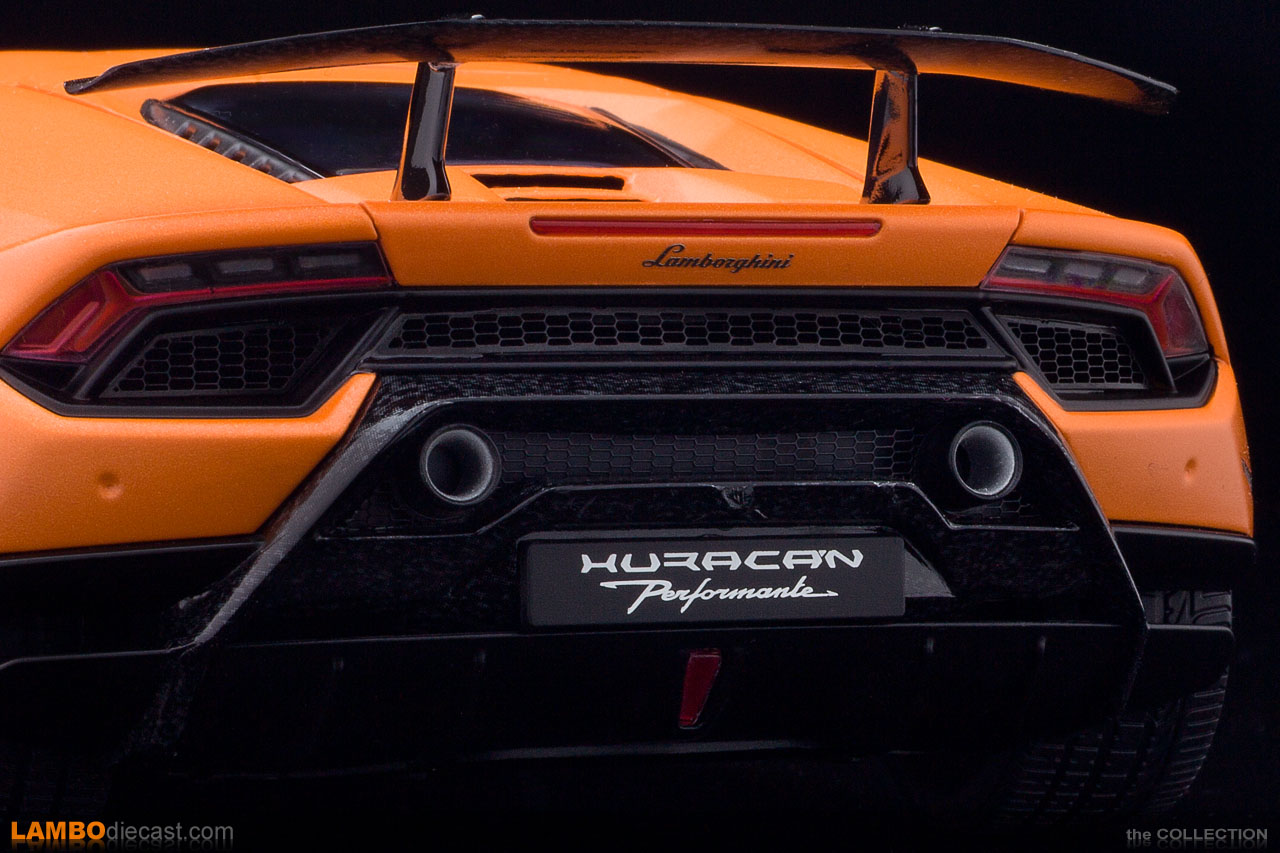 The gloss black side sills are a magnet for dust, but that amazing looking Tricolore on the doors and the small Performante script just looks so good you tend to forget about the dust, add those amazing looking, bronze finished Narvi wheels to the satin orange body and this car looks really amazing on the shelve of my display case.

AUTOart didn't forget about the small ALA script either, both on the lower front bumper and on the large rear wing you'll find a tiny ALA script, just where it should be compared to the real car, and while I'm personally not a fan of Forged Composite on a Lamborghini, the 1/18 scale replication AUTOart did on this Huracan Performante looks close enough to the real deal.

On the inside this AUTOart model comes with the carbon fiber sport seats, complete with Arancio livery on the seats and the steering wheel, and a small, orange 'Performante' script on the seat bolsters, the central console is finished in Forged Composite and there is a small armrest, just like on the real car. Also, the air vents on the dashboard are finished in Forged Composite and come with the small script on them ... again as seen on the real car ... but the interior is where AUTOart missed a few details that would really have made this model perfect.

There is no stitching visible on any parts of the interior, it would have been great to see orange stitching to complement that 'Y' shape on the seats, some orange stitching on the seats, dashboard and door panels would have really set this model apart. Or how about those tiny 'Y' engraved on the seats and door panels as part of the 'Performante interior' option on the real car, that would have been so amazing on this model ... but truth to be told, the AUTOart model shows the 'Bicolore Alcantara' interior with Nero Ade stitching instead of contrasting Arancio Anthaeus stitching ... so this isn't a mistake, it's just unfortunate. 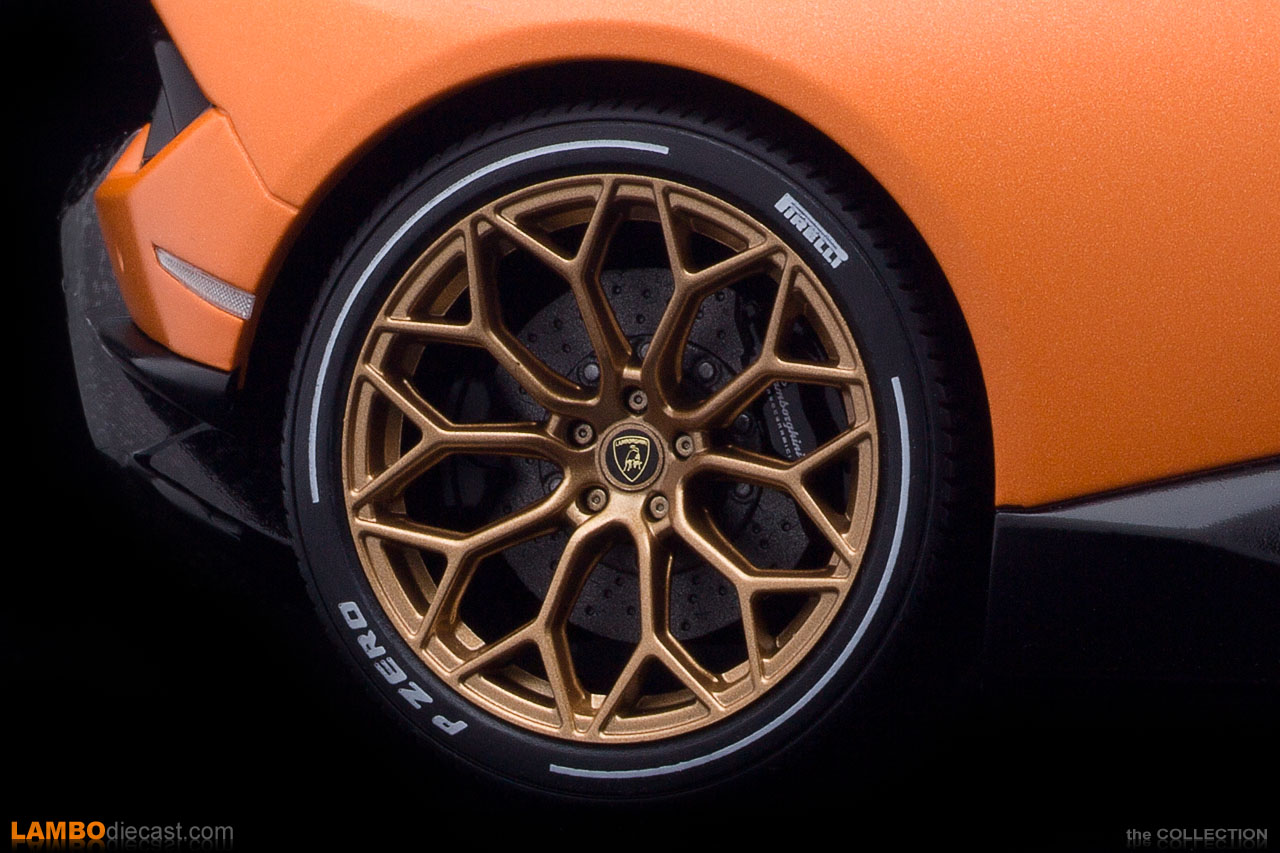 On the outside, the AUTOart model comes with the 'Style Package' which includes most black parts to be finished in a high gloss, including the exhaust tips, and another option on the tires ... white Pirelli script and stripes, very nice indeed.

So is this one of those models that you really should add to your collection? I would have to say yes, this is an amazing model, very highly detailed, extremely close to the real car and in this satin orange metallic it looks absolutely magnificent. The only reason I'm thinking about adding the Verde Mantis version too is to have the different Loge center lock wheels in my collection too, but other than that I can wholeheartedly recommend getting this Arancio Anthaeus version for your collection ... it's stunning!

Originally released in May 2019.