Automobili Lamborghini SpA was founded in 1963 by the late Ferruccio Lamborghini, with the 350 GT as the first production model available to customers, later the famous V12 would be enlarged to 4-Liters to create the 400 GT and 400 GT 2+2, and while these were stunning Gran Turismo cars, these were a classic front-engine, rear-wheel-drive luxury cruisers, capable of propelling two occupants at very high speeds in the early Sixties.

But then Lamborghini unveiled the Miura at the 1966 Geneva Motor Show, they actually showed a chassis only previously at the 1965 Turin Motor Show, but several months later, in March 1966 the first prototype of the Miura was shown in Switzerland, this was an amazing innovation, a transversely mid-mounted, compact V12 engine, something the world had only seen in pure bred race cars before, but never on a road going exotic.

This 1966 prototype was built on a 0.8mm steel chassis with number 0509 and boasting with a wheelbase of 2,460mm, for the production version this would be increased to 2,500mm to offer more interior space for the driver and passenger.

The prototype Lamborghini Miura was finished on a bright orange body with gold side sills and gold knock-off wheels with the compact 4-Liter V12 engine visible underneath a glass engine cover, sadly that style, with four 'boxed' air filters on top of the carburattors, just couldn't cool the engine enough, famous test driver Bob Wallace had openings cut into the glass panel, but that still wouldn't pull enough hot air from the engine cover, so the production version of the Miura came with louvres over the engine, allowing rear view visibility coupled with air pressure to pull the hot air from the engine to the outside.

Also note the prototype had the exhaust tips fitted into the lower part of the rear fascia, four units protruding throught the hexagon grille, but that didn't seem too practical, so by the time Bob Wallace was road testing this prototype, the exhaust was rerouted to four tips underneath the rear section, which wouldn't be fixed to the actual exhaust pipes by the way, if you open the rear, which tilts at the rear in it's entirety, those tips angle down together with it, they aren't fixed on the exhaust pipes, but to the rear section itself.

Over the years there have been lots of scale models of the Lamborghini Miura, AUTOart did the SV model only, but Kyosho released all the production models, from the original P400 to the P400 S, the P400 SV, and even the custom-built Miura SVR or SVJ, inspired by the one-of-a-kind Miura Jota, of which only a Looksmart models exists in 1/18 scale.

In 2016 Looksmart released a series of 11 models in the 'Miura 50th Anniversary' series, and one of those was the 1966 prototype, finished in the correct Rosso Arancio Miura, which is actually orange, hence the Arancio in the name, but also with black window trim, just like the Miura P400 production model would have, chrome only came with the introduction of the Miura P400 S, Looksmart item LSMH01 sold out almost immediately, and I never even saw one listed for sale.

But for a while, I've been keeping an eye on eBay auction for an AB Models version of the 1966 Muira prototype, and finally, after countless attempts, I managed to win an auction for just $97 ... which went up to $196 thanks to shipping costs and taxes, so it got about twice as expensive before I got it shipped to Europe. 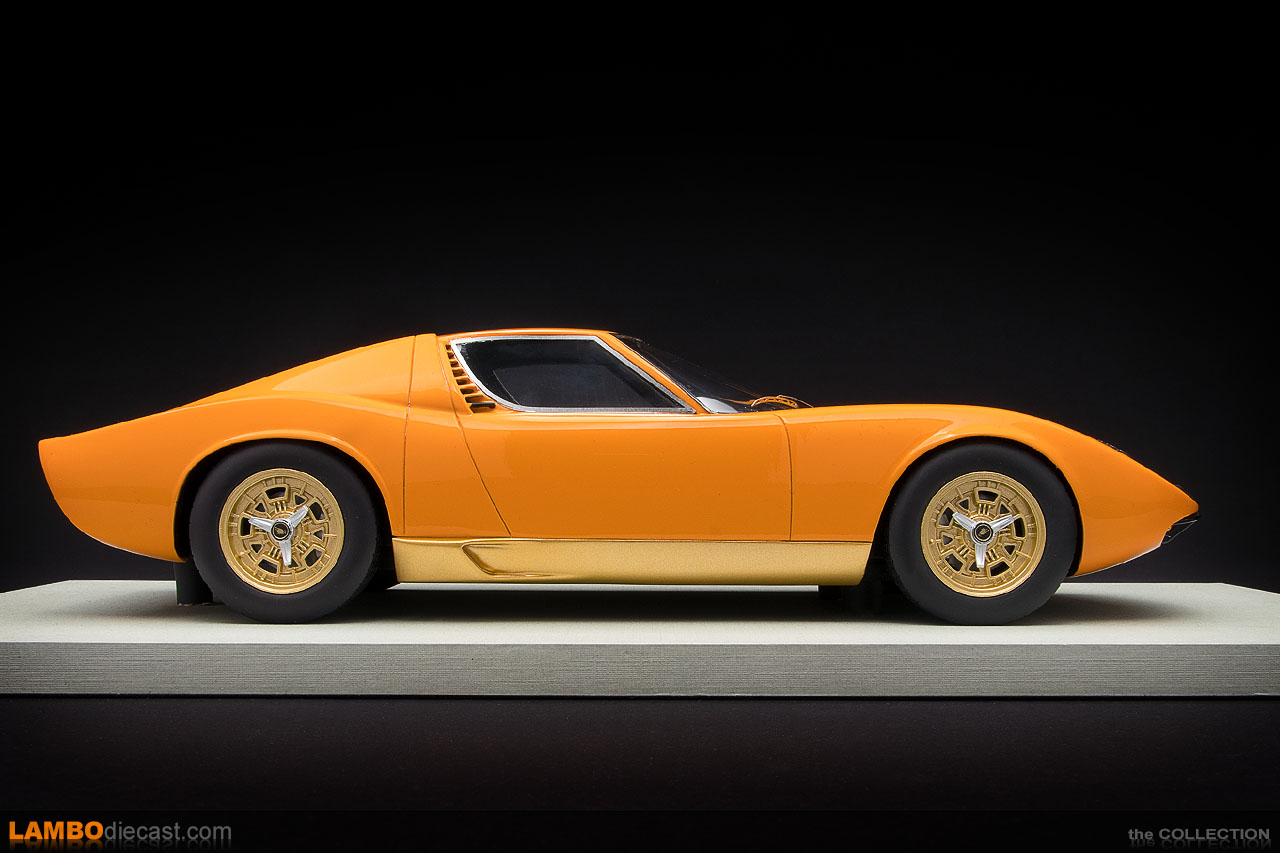 Some have stated these AB Models or Autobarn Models actually use the Looksmart molds, and while that might be the case, there are a lot of differences between the two models, for me personally, the most important is the use of silver window trim on this one, that is just incorrect, but other than that this model does look the part, with the glass engine cover and the air filter boxes.

The wheels are really very nicely detailed, they should come with a Pirelli script, but that didn't even get featured on the Looksmart model, it does seem the overall stance and design is really close to the original car too, while the interior is an all black affair, the two large dials are there behind the steering wheel, the gear shifter and those gauges on the central console look decent enough, so all in all this is still a nice model.

But then you look closer, and you'll notice the windshield and the rear window pane aren't really nicely fitted, they show the problem we've seen on the very early GT Spirit models, the corner isn't glued down completely, which is a shame, because apart from that detail and some other minor flaws this really is a beautiful model of a unique car, which sadly doesn't exist anymore in real life as far as I know.

So is this 1/18 scale 1966 Lamborghini Miura Prototipo by AB Models worth the $196 price I paid? Not really, it is worth the $97 winning bid, but as usual shipping costs and taxes for Europe ruin most deals, and this is exactly the case with this one, she's worth €100 all day long, but not really much more.