Arguably the most valuable Lamborghini in existence would be the one-off 1968 Lamborghini Miura Roadster, back in 2013 this car was already valued at $10,000,000, about double what the original 350 GTV prototype was valued at, at the time of writing, late 2021, the Lamborghini Miura Roadster might have passed the $20,000,000 mark already, with only one in the world, this is the unicorn in automotive history made in Sant'Agata.

The Lamborghini Miura Roadster was unveiled at the 1968 Brussels Auto Show, designed and built by Bertone without an order from Ferruccio Lamborghini, the Miura Roadster was very different from the regular coupe, for starters the entire rear section had to be redesigned, the engine became partly exposed to the elements, but Bertone also fitted different taillights and moved the exhaust through the lower grille, the roof was even 3 cm lower because the windshield rake was changed to counteract turbulence at 300 km/h.

We've seen it on the Lamborghini Veneno Roadster, the Centenario Roadster, and recently on the Sian Roadster ... Lamborghini started this habit of offering no roof with the Bertone Miura Roadster ... they never bothered making a roof panel for this concept Barchetta, the side intakes behind the windows were enlarged and the integrated rear wing was larger on the Roadster version of the Miura, as a result of having the windshield angled down more, the original side windows couldn't be used, so Bertone decided to just have no side windows, if you get rid of the roof, the side windows are just a detail anyway.

Remember the Miura had toggle switches on a roof mounted panel ... in the Miura Roadster there was no roof, so the switches were moved onto the central console, and just for good measures, Bertone fitted a bespoke steering wheel in this bright blue Miura Roadster.

Ferruccio Lamborghini wasn't interested in building a Roadster on his famous Miura, so this Bertone concept remained a one-off, even when several customers requested a Roadster from Lamborghini, in 1969 this one of a kind Miura was sold to the ILZRO, the International Lead and Zinc Research Corporation, a company delivering various metals to the car industry like aluminum, zinc and different alloys. 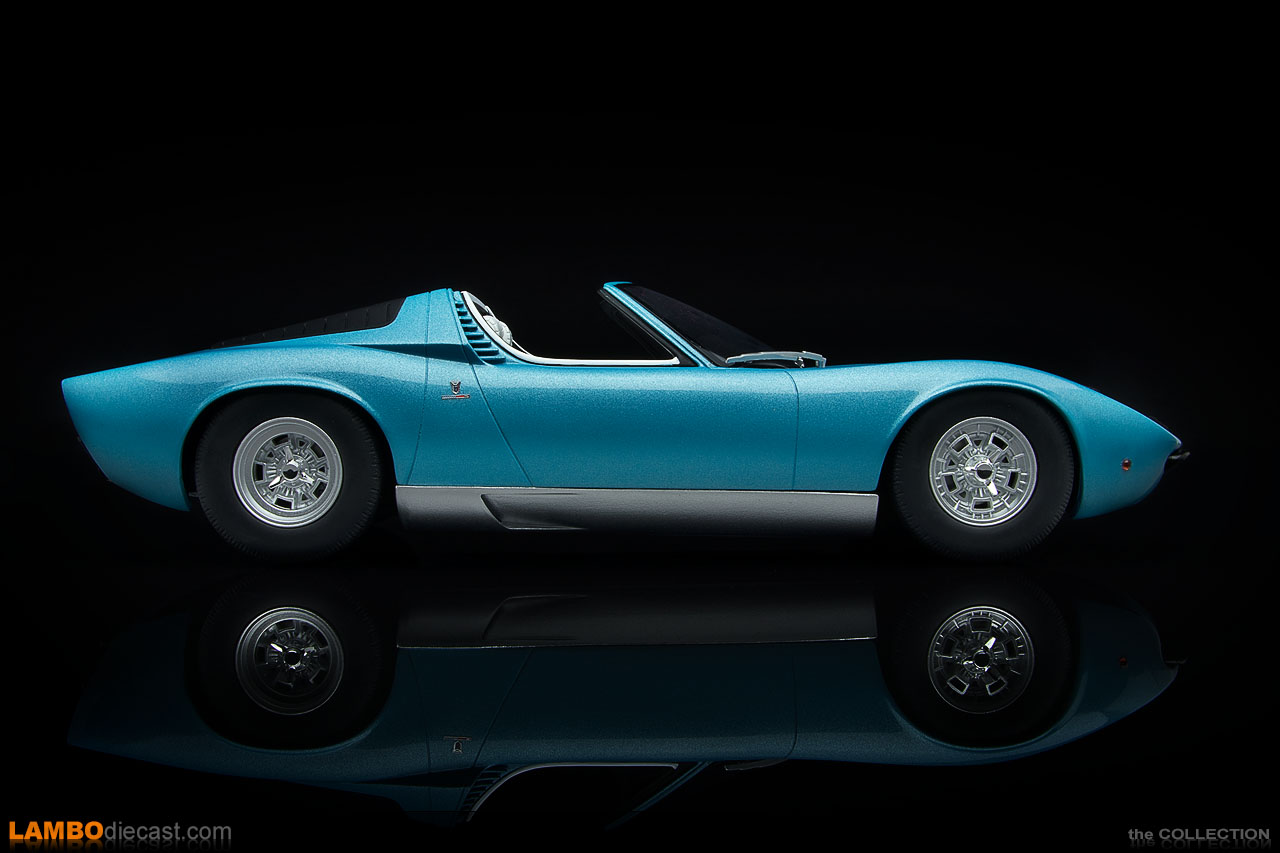 The Miura Roadster concept was built on chassis number 3498, and she was completely disassembled the moment she arrived in New York, all possible parts were changed into zinc-plated, chrome-plated, polished or re-manufactured using some metal (like lead!) made or distributed by the ILZRO, some of these items included the carburetor bodies, the carburetors stacks, engine covers, transmission covers, oil pump, filter housings, exhaust system, radiator, interior switches, the steering wheel, the wheels themselves and both front and rear bumpers.

The Miura Roadster was renamed into the Zn75, and she featured chrome details and was finished in a metallic green sprayed over a black metallic base giving a strange dark green pearl-like color (iridescent gold-green), with a contrasting brown leather upholstery it looked totally different from most Lamborghini Miura.

The Miura Zn75 would change hands several times over the following years before she ended up back in the United States, then owned by a New York-based real estate developer, Adam Gordon who decided to have the car restored back to the 1968 Brussels Salon specifications by the well-known Miura restoration specialist Gary Bobileff, work started in 2006.

The total restoration of this one of a kind Lamborghini would take about two years before the Miura Roadster would once again be shown in her original 1968 livery at the 2008 Pebble Beach Concours d’Elegance, where she took second place and was driven onto the stage by none other than Valentino Balboni … in 40 years the Lamborghini Miura Roadster had covered only 7,444 km in total.

Some sources state the very glittered blue shade on the Lamborghini Miura Roadster is called Azzurro Cielo, but in the Miura bible written by Joe Sackey, he mentions the Miura Roadster had a bespoke color called Blu Ischia Metallizzato, but it did come with a Bianco leather upholstery and Rosso carpets, a stunning combination.

I have been mesmerized by the Lamborghini Miura for many years, especially the later SV version and the Roadster, and while some owners had their Miura converted into a Roadster or Spider outside of the factory, there was only one real Miura Roadster, and I already had 1/43 scale models of both this original blue metallic version and the dark green Zn75 version, but a 1/18 scale hadn't been made yet, so I was ecstatic when GT Spirit announced they would be making this model, my order went in immediately.

It took a long time for GT Spirit to finally deliver this model to their customers, and while this is a limited-edition model, they made a total of 1,200 units, and this time no collaboration with Kyosho, I was hoping the latter would do the Zn75 version, but no luck, let's hope GT Spirit releases the dark green Zn75 in the future, they have the mold now anyway.

When I opened the box I was immediately impressed with the blue metallic paint, while there are sometimes issues with GT Spirit models, you'll have to agree their metallic paint is usually flawless and comes with an amazing, deep shine. This Miura Roadster scale model is no different, it's an amazing paint job on a 1/18 scale, and yes, it sparkles like no other, but that's exactly what the real car does too, so kudos to GT Spirit for making this model in this color. 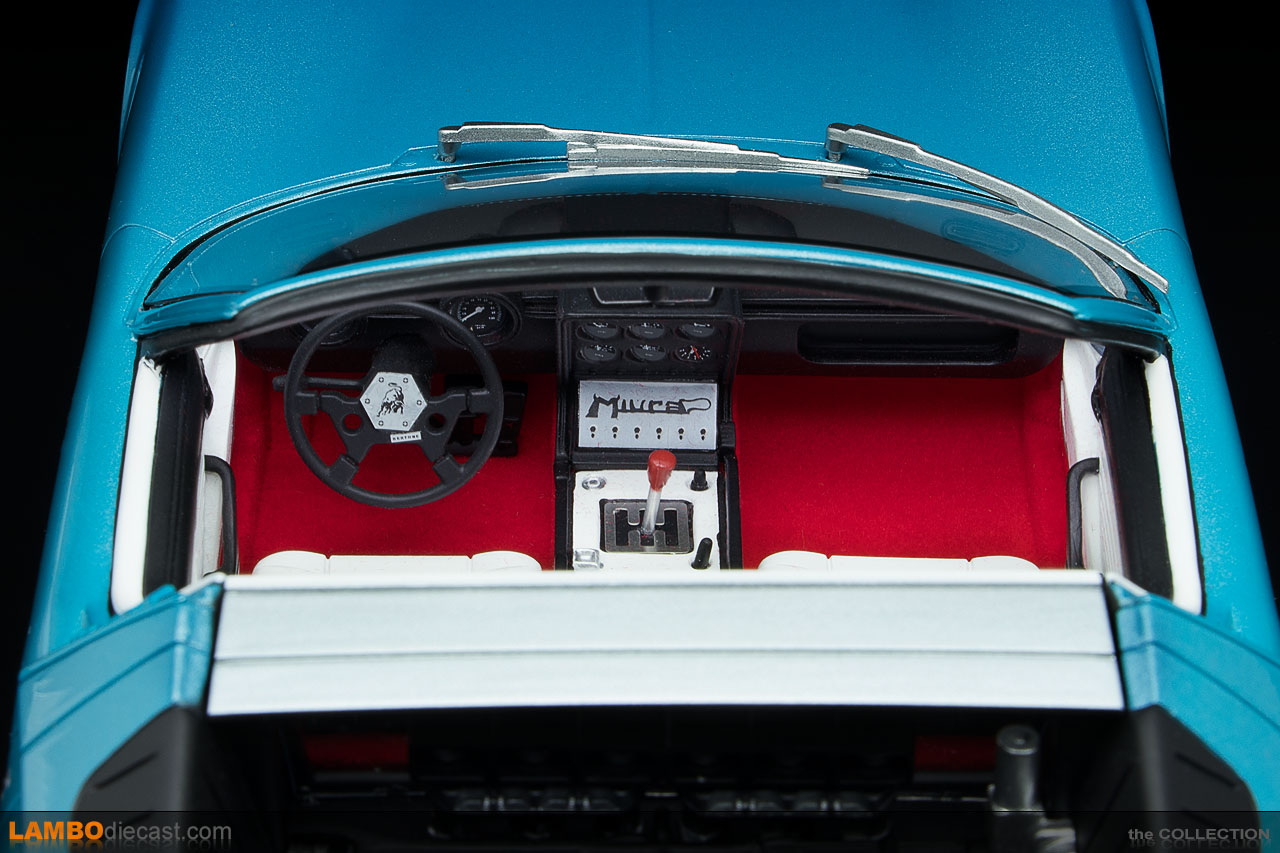 Going over the model, it seems GT Spirit got the details right, the carburetor intakes got covered with square add-ons, what is visible of the engine corresponds to the real car, also the interior looks pretty close to the actual car, with six toggle switches and a Miura script on the central console, two switches next to the wooden gear shift knob, even the bespoke steering wheel, complete with Bertone script is there on this model, it might not be as finely made as an MR or an AUTOart, but I am impressed with the attention to detail GT Spirit shows in this model.

I for one am extremely happy with this model, for the price, this is a great value for money model, it may be a sealed resin, but it's a Roadster anyway, and while I would love to be able to admire the engine and look under the front hood, that would more than double the price, all the small details that make the Miura Roadster so different from the regular Miura S were captured by GT Spirit ... but one.

There is one mistake on this scale model, the rear wheels, it looks like GT Spirit fitted Miura SV wheels at the rear, and that's incorrect, the Miura Roadster was built on the Miura S basis, with those wheels too, so it should come with the same wheels front to rear, 7x15 inch with HS 205-15 Pirelli Cinturato tires, the Miura SV came with 9x15 inch rear wheels.

And this is even stranger when you consider GT Spirit did a Miura S model in 1/18 scale back in 2019 together with Kyosho, I got the latter one because it was a stunning blue metallic shade (a little darker than this Roadster), and it comes with the same wheels front to back, so they had the molds to get it correct ... something very weird happened here I guess.

Still, I absolutely love this glittered blue Lamborghini Miura Roadster, finally a large 1/18 scale model of the most valuable Raging Bull ever.