Right from the start when AUTOart announced they would be releasing a 1/18 scale model of the LB-Works Limited Edition Lamborghini Aventador, I knew I just had to add this model to my collection, with the original LB-Works Aventador already in my possession, this new, v2.0 edition of Liberty Walk's Kato-san widebody based on the Lamborghini Aventador was a must-have for sure.

Then AUTOart released the colors they were going to do, five in total, black, red, blue, a Martini livery, and satin silver over a red interior ... that's the one for me, if I could get only one of these amazing low-riding Lamborghini, the satin silver metallic one had to be it, let me explain why.

You know I'm a big believer in adding either the press release color combination or the show car color setting to my collection, those are the ones I usually buy first ... and the satin silver metallic LB-Works Aventador Limited Edition was the car Kato-san flew all the way from Japan to Switzerland for the European première at the 2018 Geneva Motor Show, sadly I couldn't attend due to health issues, but a good friend and fellow Lamborghini afficionado took lots of photographs if this extremely wide, and low Lamborghini Aventador. 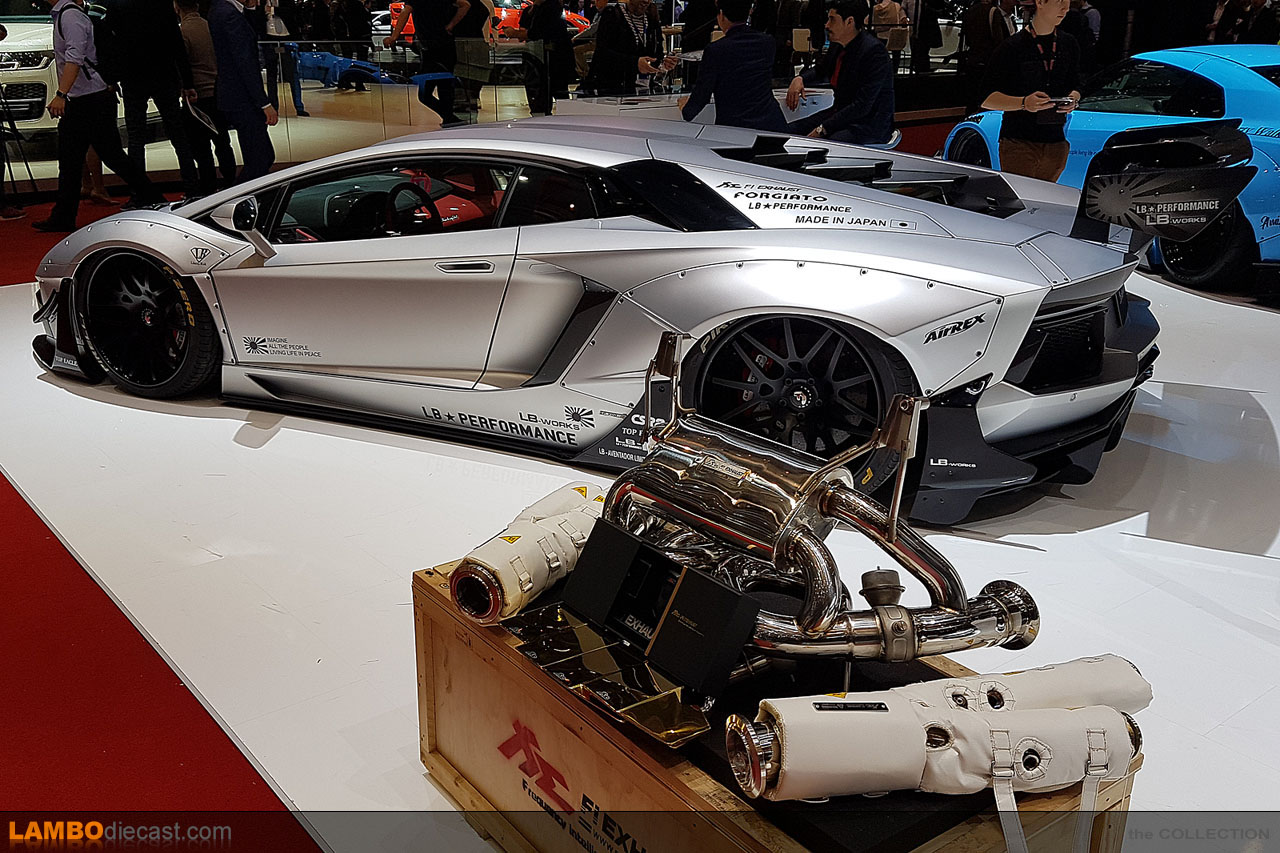 A little background information on this second edition wide body kit, to celebrate his 50th anniversary, Wataru Kato created an evolution the LB-Works Aventador, and he called it the 'Limited Edition', as only 50 would be made for the entire world, 30 of those were destined for Japanese customers while 20 would go overseas … at nearly US$60,000 each when you opted for lightweight carbon fiber, at the time of reading all 50 kits are sold out I've heard.

AUTOart really tested my patience with this specific model, it would be the fourth shade in the series to be released, are you kidding me, I wanted this one to be the first, it's THE most important one being the Geneva show car, oddly it had nr 22/50, which might mean Kato-san only started counting at 21 for the overseas cars, with numbers 01 to 20 reserved for Japanese customers? 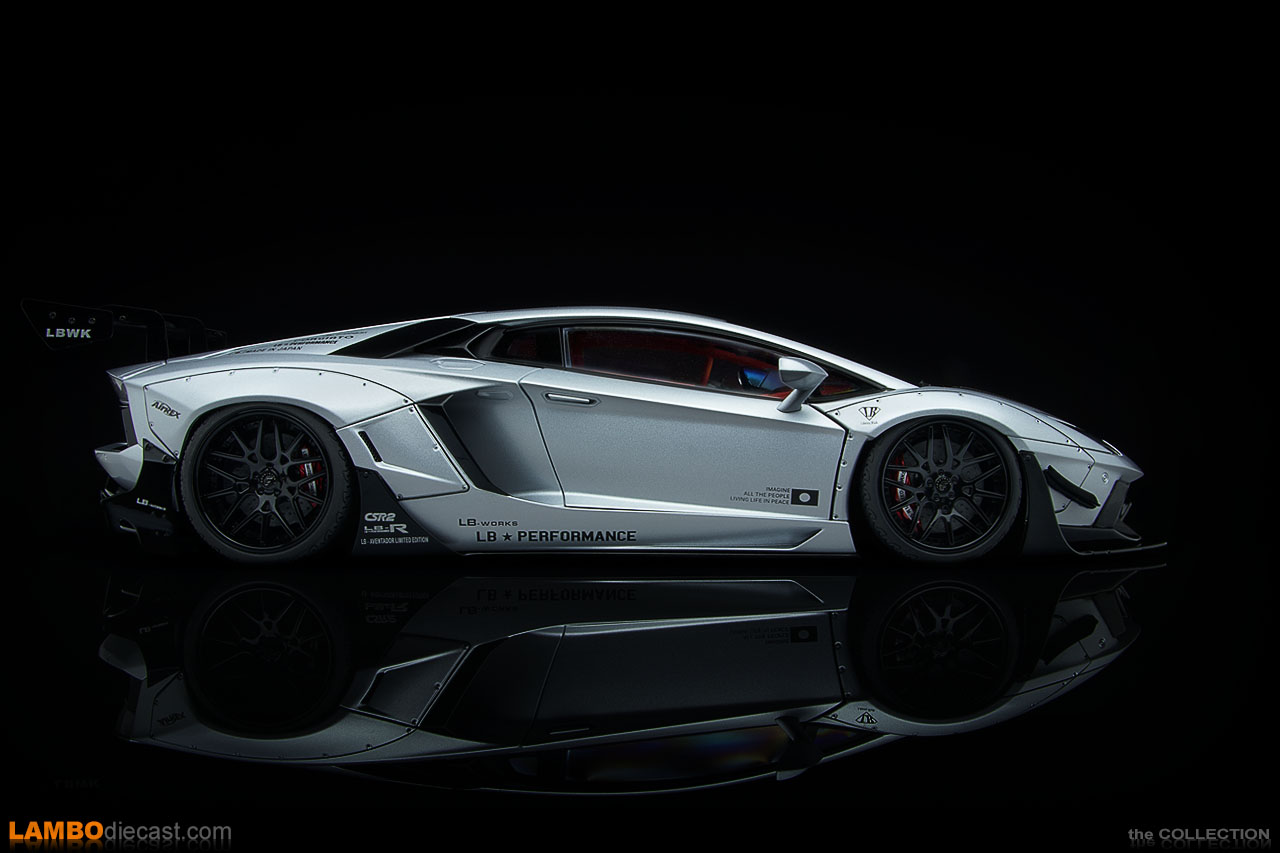 And this is where AUTOart missed the ball a little, this satin silver metallic car exists in real life, in this color, complete with a full red Bicolore Elegante interior, if ordered from the factory like this, the interior would be  called Rosso Centaurus, but it could be an aftermarket upholstery too, but back to the mistake, or more of an ommision, AUTOart put 50/00 on all these LB-Works Aventador Limited Edition, which is fine for cars that don't exist in real life, but both the all blue one and this satin silver one are a near perfect replica of an actual car, so why not put their number on the scale model too then? License issue perhaps? I don't know, but it would have been an amazing detail of they would have put 50/22 on this one.

But let's get on with the things that are just perfect on this AUTOart model, for one the color, it's a silver metallic paint with a satin topcoat, but it's not a neutral silver, there is a hint of blue in this one, AUTOart nailed it if you ask me.

Also if you compare this one to the black, red, or blue version (I just couldn't resist buying those too, I'm weak, I know), this silver one has a lot of details that are differnt to the other shades, this satin silver one is the only one that comes with a clear carbon fiber front hood, and while we all love a carbon fiber hood that has that 'V' in the center where the fibers meet, AUTOart didn't do that, because the real car doesn't have this either, the fiber runs in the same direction from left to right.

Another major difference between this car and the other three are the wheels, while the others run on Sky Forged wheels, this silver Bull comes with Forgiato wheels, beautiful glossy black cross-spokes with a massively deep outer rim on the rear ones, I love this kind of wheel, AUTOart even changed the decals on the shoulder intakes to match, it now shows Forgiato underneath FI Exhaust and above the classic LB-Performance and the 'Made in Japan' script. 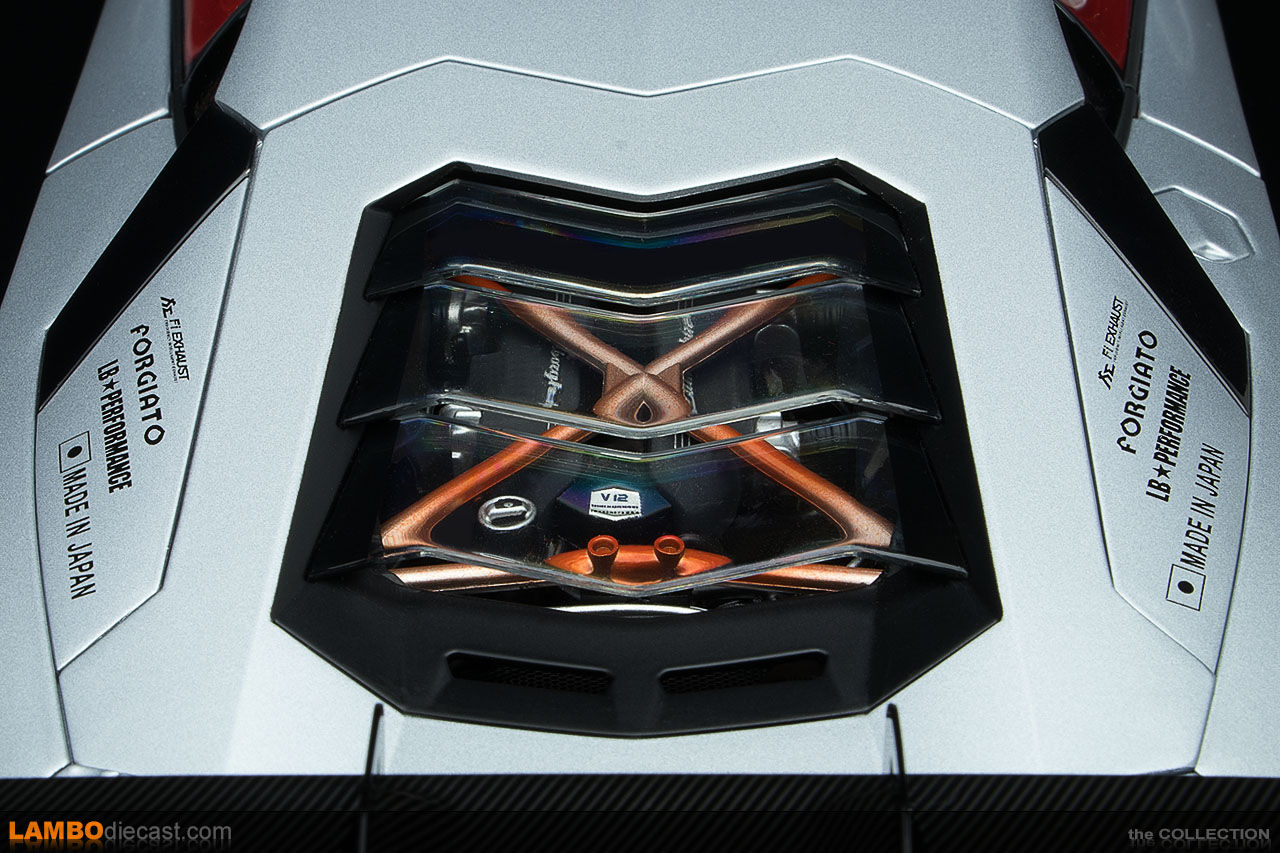 One thing that doesn't match with the real car are the decals on the top of the windshield, AUTOart's does say LB-Performance Aventador Limited Edition, just as on the real car, but at the Geneva Show they also had 'Top Eagle' and 'Forgiato' on the windshield, that might have been added later one, or has been removed by now, I'm not sure, but when comparing the two, that's missing on this scale model.

Looking at the side of this amazing AUTOart model, we find Air Rex on the rear fender, the make for the air ride suspension, on the lower diffuser panel behind the read wheel there is just a 'LB-Works' decal, while the fin in front of the rear wheels comes with 'CSR2', 'LB-R LB-Performance', and 'LB-Aventador Limited Edition' decals, all correct to the real car, albeit the 'Top Eagle' is missing again ... so AUTOart might not have received a license to put that name on the model?

On the side sill we find LB-Works, and a large LB-Performance decal, on the real car there is an additional name there, and a Japanese flag, which AUTOart did put on the door with the famous 'Imagine all the people living life in peace', but it's a different flag, strangely enough there isn't a large Pirelli P ZERO on the tires either, which does feature on the real car, just like a different design on the end plates for that massive, clear carbon fiber rear wing, the AUTOart model just says LBWK, the real car has a gradient design and LB-Performance together with LB-Works on those fins. 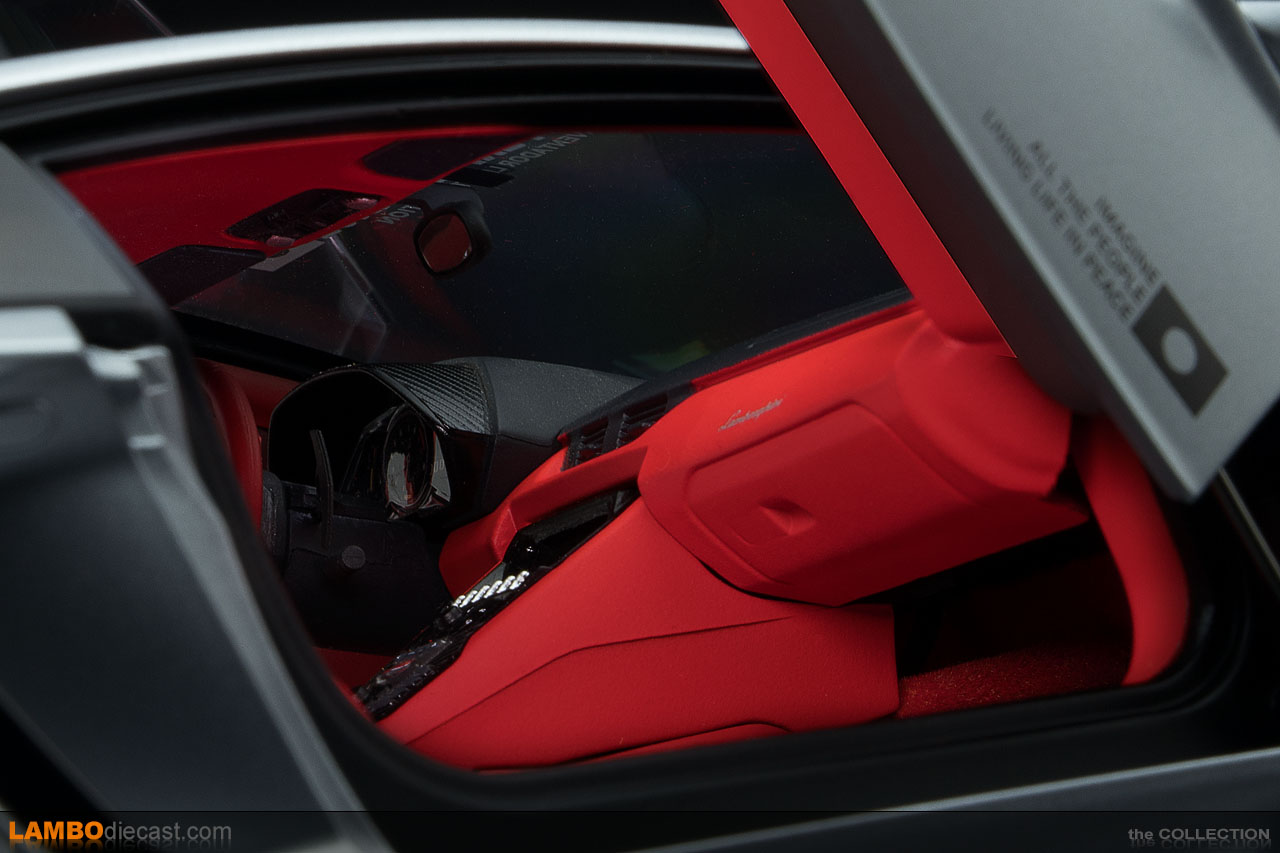 One of the major attractions on this specific shade is that magnificent red interior, complete with a white Raging Bull crest on the headrests, even the headliner is finished in red, while the door handles, central console and dashboard pod are made from carbon fiber, just as on the real car, the same with the cross-brace over the V12 engine, a kind of burnt titanium look ... of which I'm not really a fan, but it's correct to the actual car, so no complaints there.

This was the one I've been waiting for, and I couldn't be happier with it, they all look nice, and I will be getting that Martini livery too, but this satin silver is the one for me, it is arguably the best of the five for sure, and if you would get only one of the five shades AUTOart released, get this one, without a doubt, it's THE most beautiful one of them all, and it's the 2018 Geneva Motor Show European première car, what more could you ask for? 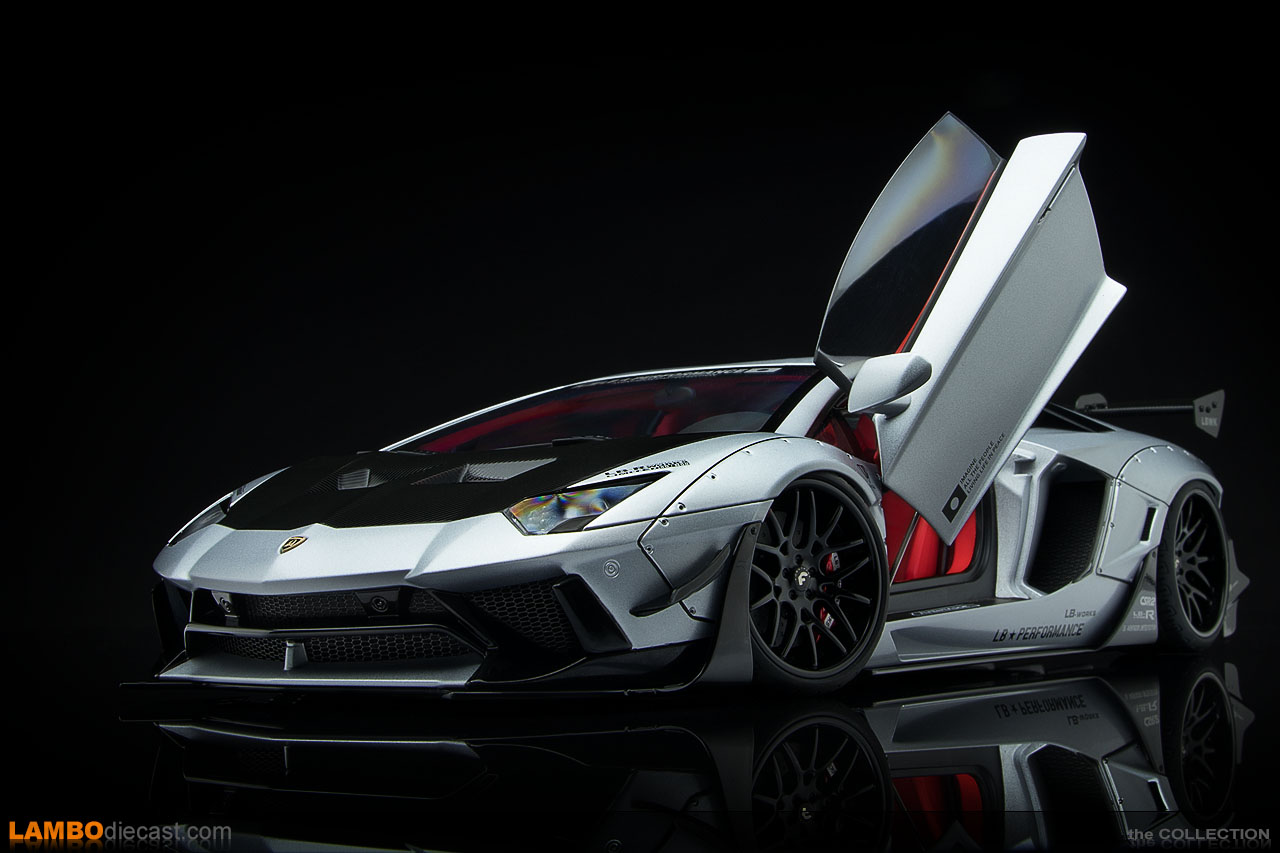 It's not 100% perfect, but what is these days? This is as close as it gets, and let's not forget, everything opens up on this model, the doors, the engine cover, and the front hood, the latter unveiling the air tank for the suspension, all very nicely detailed.

I know D&G also has this model in their lineup, and I agree it will be even better than this AUTOart model ... but it's a sealed resin model, and more importantly, it's at least twice the price, if not more ... so even with the few minor mistakes on this AUTOart model, it is worth every €, $, £, or any other currency you use ... it's an expensive model, I'm not denying that, but this one is value for money in my humble opinion.