Back in 1998 Automobili Lamborghini SpA was hard at work developing the Diablo successor, but the Murciélago would still be a few years down the line, so they came up with the MY1999 evolution on the V12 flagship model, installed fixed headlights and a modern dashboard, and dropped the 2WD model, only the VT, the VT Roadster, and the SV remained.

But they went one step further, at the 1999 Geneva Motor Show Lamborghini unveiled the Diablo GT, a 575 hp street-legal racecar, and while production was to be limited to 80 units, in the end, there are 83 Diablo GT that left Sant'Agata ... at the time Lamborghini was already involved in a one-make championship with the impressive Diablo SV-R, which was replaced by the Diablo GTR for the 2000 GTR Supertrophy championship. 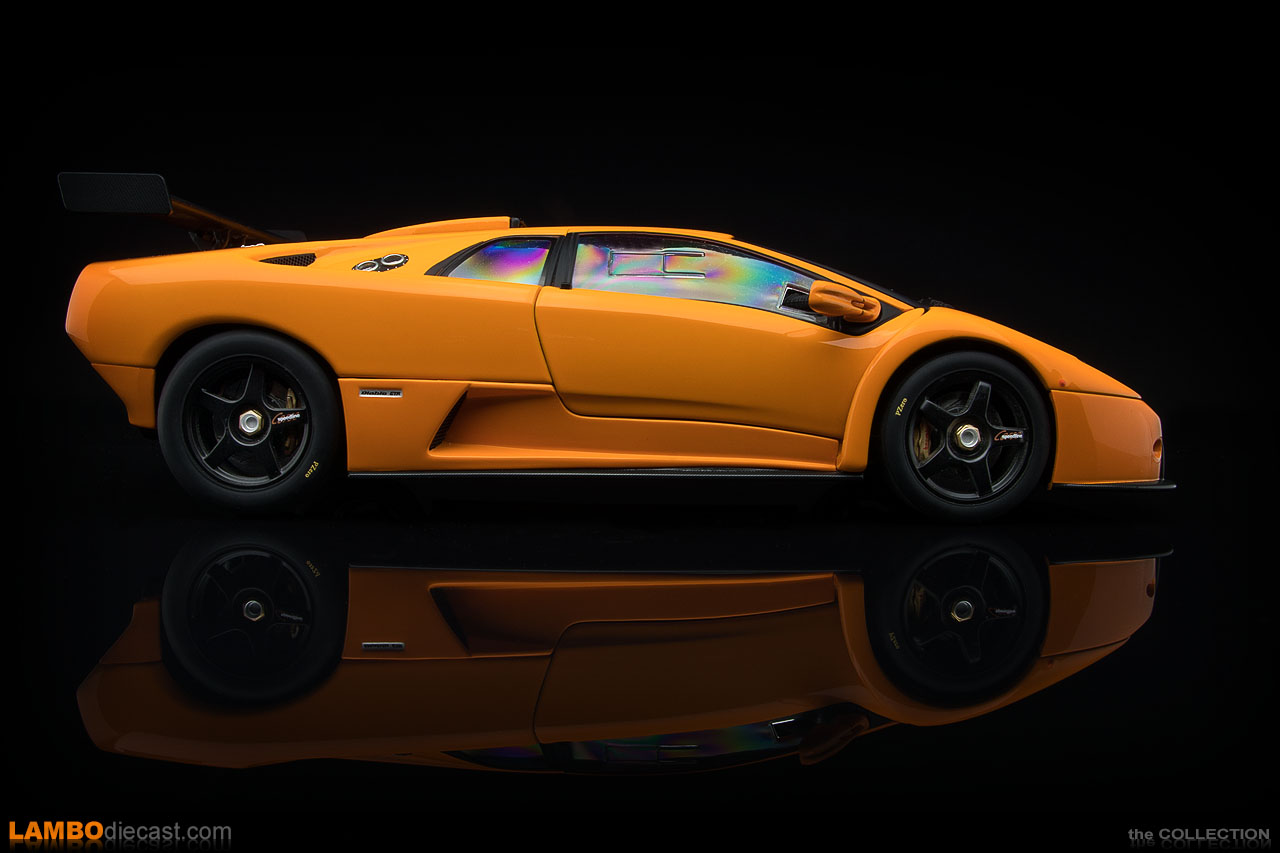 The Diablo GTR is a rare car with only 30 units ever built, and none of them were legal to drive on the road, power went up to 590 hp and the top speed was set at 210 mph (338 km/h), the acceleration from 0 to 100 km/h would take 3.5 seconds ... back in 2000 the Diablo GTR came with an MSRP of $310,000, note that Lamborghini built two 'spares' that in the end would never race in the championship season, these two are the most valuable today.

The Diablo GTR received a fully integrated roll-over cage while a more aggressive rear wing compared to the Diablo GT was fitted, now with a central strut that's bolted directly onto the chassis, brakes came from Brembo but the Lucas ABS was retained as these cars would be driven by Gentlemen drivers, not all of them were professional race pilots. The wheels were sourced from Speedline, single-piece lightweight magnesium units in 18-inch with an 85 mm center-locking bolt, these wheels could be fitted with Pirelli racing slicks or standard tires.

On the inside, the passenger seat was removed, and everything else that wasn't necessary for a race car was ditched too, a new FIA approved MOMO seat was fitted behind the steering wheel while on the central console the buttons were replaced with switches, in the passenger footwell a special fire extinguisher was fitted. Side windows were replaced by plexiglass units complete with a sliding section for ultimate weight savings, and because the air conditioning was removed, they fitted air tubes behind the exterior mirrors to pull cool air into the cockpit. 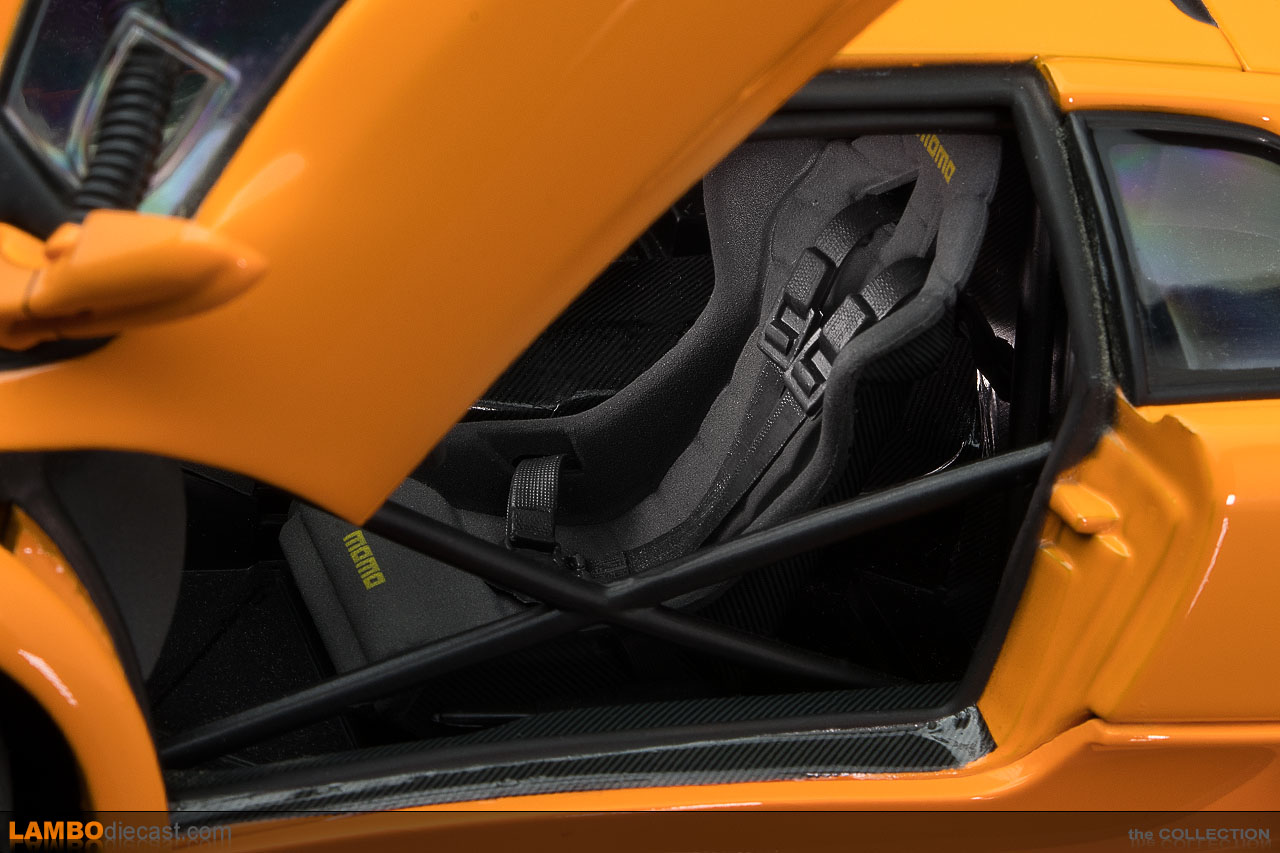 AUTOart released three shades on the Lamborghini Diablo GTR on a 1/18 scale, black, yellow (which was the press release shade), and this bright orange shade, it doesn't say Arancio Atlas on the box, just orange, and while AUTOart also released the normal production version of this car being the Diablo VT 6.0, they never released the Diablo GT which is unfortunate.

But back to the 1/18 Diablo GTR by AUTOart, item nr 74523, I have bought the black shade many years ago and never got around adding other shades until now, and I have to admit this orange one looks amazing, black is very intimidating, but bright orange just pops in the display case, and while this is an old model today, the paint is still stunning, as are all the details on the interior and under the hoods ... this is a classic AUTOart diecast that opens up completely.

Under the front hood, which comes with a massive air vent and two, fake, quick release pins at the front that are very nicely cast, you'll find the additional cooling radiator complete with hoses and everything, very nicely detailed by AUTOart, even the small carbon fiber strip on the fixed headlights is present, as is the red towing ring, also note the cut-off switch in front of the windshield is replicated by AUTOart.

Opening the doors unveil the very special interior inside the Diablo GTR, AUTOart replicated the MOMO racing seat very nicely on this model, the seatbelts are present but are made from hard plastic, which was fine at the time this model came out, but today we would no longer accept this. 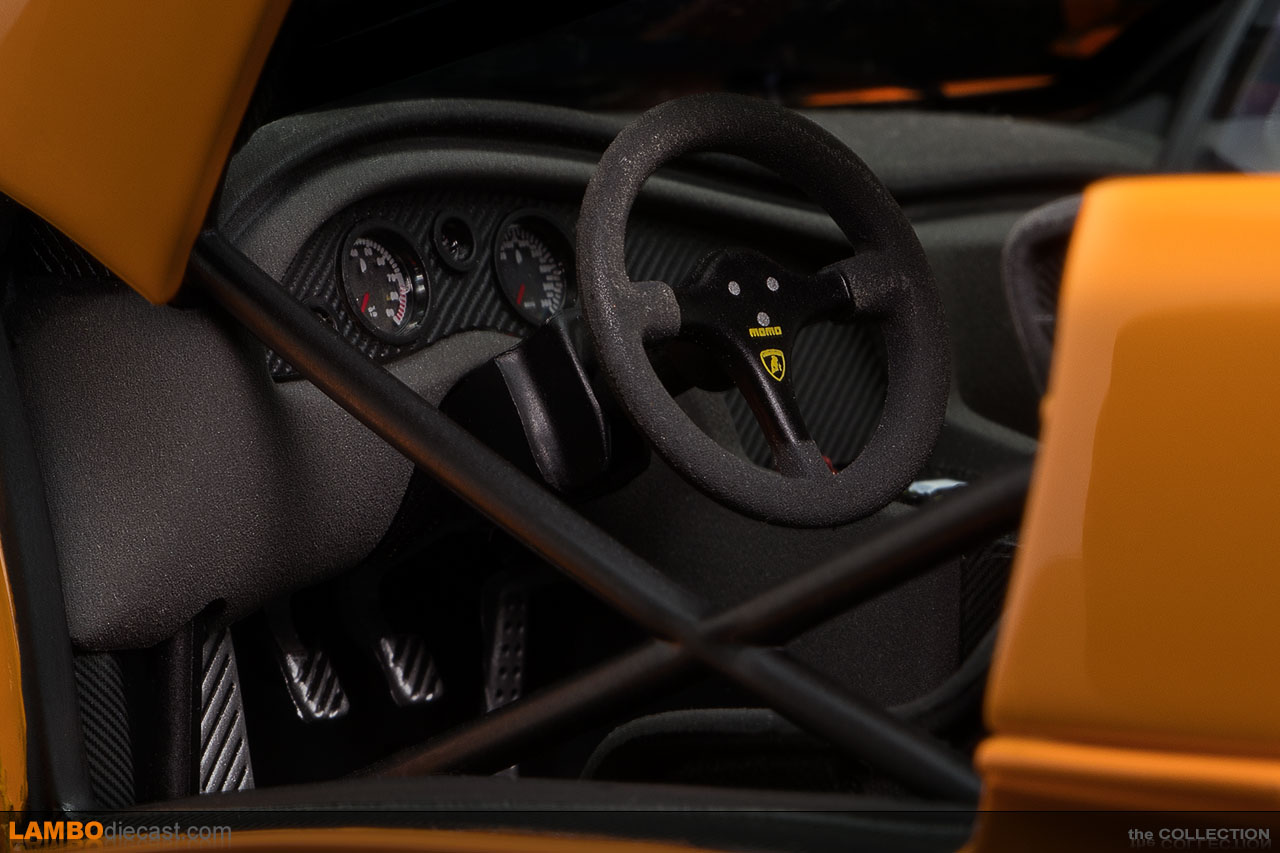 The dashboard looks great, and the analog dials are set on a very nice carbon fiber piece, just like on the real car, while the switches on the central console look like you could turn them, even the small decals are all there, the Diablo GTR came with a five-speed manual, so we find the gated transmission and the typical glossy gear lever ball in this AUTOart model, all very nicely detailed.

On the passenger side, AUTOart fitted a bright red fire extinguisher and against the firewall, you'll see a control unit and wires, all very nicely done, you get the impression you could start that massive V12 up in this model.
This brings us to the 6.0-Liter V12 engine inside this AUTOart Diablo GTR scale model, and it comes complete with the carbon fiber intake on top of the gold-finished manifolds, even the GTR plaque is present just like on the real race cars.

I also love the black Speedline wheels with their center-locking nut covering grooved disk brakes and gold-finished Brembo calipers, AUTOart fitted slicks on this model which is in line with the race cars when competing on a dry track, so this all looks great.

But there is one detail I'm not too fond of, the exhaust AUTOart fitted does look like the one found on the real Diablo GTR, but it has some serious cast lines, and it's finished in high-gloss chrome, which wouldn't last long on a race-used car, a more satin metal finish would have been better, but it's still a great looking replica anyway.
So this older AUTOart Lamborghini Diablo GTR model is a very nice addition to the collection, this is a classic diecast from an era that will probably not return, the Diablo GTR is a 'Performance Series' model from AUTOart so it comes in a 'window box'.

Do note AUTOart has announced they will do a new release on the Diablo GTR, this time most likely made in their new composite production system and available in either black, yellow, or white ... so there won't be a new Diablo GTR in orange, which makes this one even more interesting.