When I was a teenager (I know, that's a long time ago) I had a poster of a white Lamborghini Countach on my bedroom wall, next to it was a poster of a red Lamborghini Countach seen from the side with a woman draped over the front and the windshield ... I guess that started my obsession with Lamborghini, I bought my first second-hand book that featured the Countach and saved up to buy my first 1/18 scale model ... the one that started my entire collection.

But I didn't get a red Countach, instead, the very first model I bought to display was a black 1/18 scale Lamborghini Countach with a tan interior made by Tonka Polistil ... and the reason was simple: it was the only shade that came with the rear wing!

Fast forward about 30 years, and the 1,000th Lamborghini scale car to be added to my collection is the bright red over white Countach LP500S made by AUTOart, a model that has been sold out for many years now, and while it was sold for considerably less than what they are listed for today, it is an absolute masterpiece from AUTOart, and it isn't even a Signature model, it's 'only' a Millennium series, but I love it, this is the classic Lamborghini Countach color combination, red over a light cream interior. 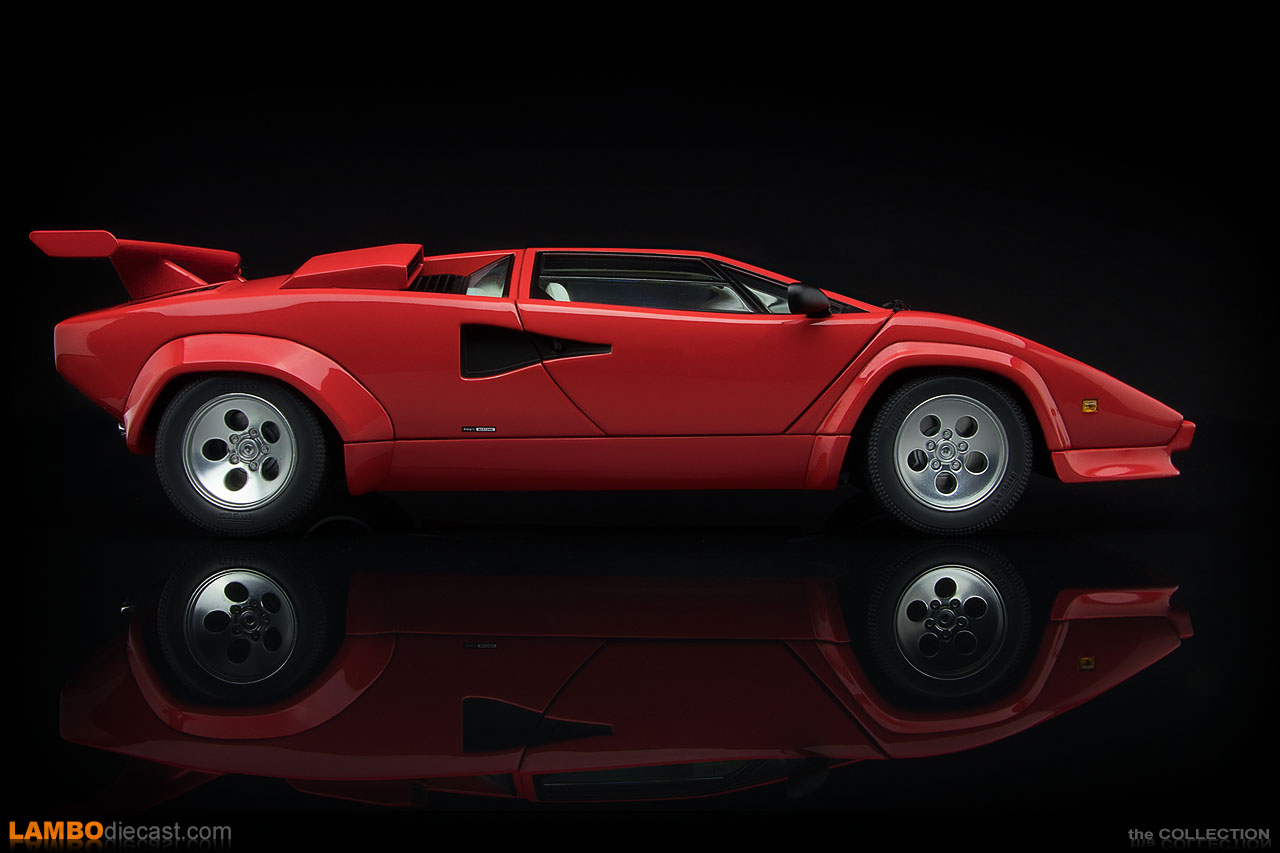 Now things have considerably changed, and I'm looking to add more models to my collection, so when this red-on-white AUTOart Lamborghini Countach came up, I was interested, but it had to be perfect because the seller was asking a lot of money for this classic model, but it did come with a pristine box and all the paperwork that was included many years ago.

The Lamborghini Countach LP500S was introduced in 1982, as a more powerful successor to the Countach LP400S, with the transition from the narrow body LP400 into the wide and wild LP400S the added width of the tires, wide wheel arches, and that massive rear wing that actually slowed down the Countach because of the additional drag, some argued the LP400S was underpowered, as they were tuned down to 'only' 350 hp while the LP400 came with 370 hp.

It took Lamborghini five years to develop a 5-Liter engine for the Countach that didn't overcook itself like on the prototype, the exact displacement was only 4,754 cc, however, but the car was still called the LP500S in 1982 ... LP480S would have looked weird I guess, not only was the engine enlarged, Lamborghini also updated the interior, it became a little more luxurious, and arguably better finished compared to the LP400S, do note we're still talking about an Italian car from the early Eighties... don't expect too much, all the workmanship went into the engine in those days.

More importantly, the Lamborghini Countach LP500S came with 375 hp available to the massively wide, 345 mm wide rear wheels on 15-inch wheels in the famous 'telephone dial' design, and while this model only remained in production for three years, as the magnificent QV, the QuattroValvole, was unveiled in 1985, total production still reached 321 units, making it the best-selling V12 supercar from Sant'Agata at that time, with acceleration figures in the early Eighties of 5.2 seconds to 100 km/h and 17.8 seconds to 200 km/h, and a top speed of 293 km/h (182 mph), this Raging Bull was also the fastest car on the road.

So why did I add this by now expensive AUTOart model to my collection? Well, just look at this beauty, I have the Kyosho Countach LP500S in red too, but that one comes with a plain black interior, and while the era of this Countach didn't have two-tone interiors and contrast stitching, I do prefer a lighter interior inside a red car, and this AUTOart comes with a stunning white interior, complete with red piping, just like their black Countach by the way. 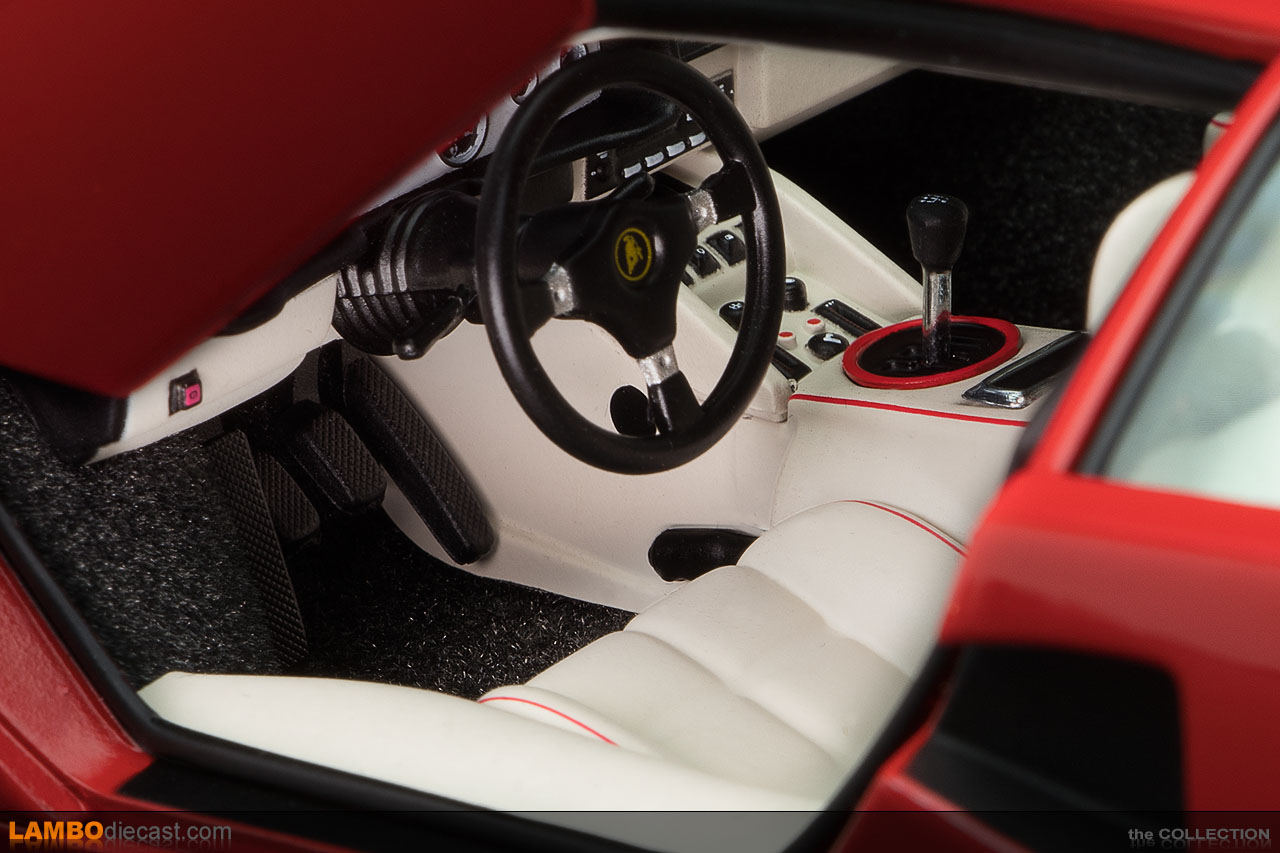 I'm a fan of the Lamborghini Countach, especially the one with the wide wheel arches and rear wing, and this AUTOart doesn't disappoint, the model looks amazing, the pop-up headlights open by the push of a button on the underside of the model, the doors have a spring that opens them up when you shift the little button in the black Naca duct forward, the driver's door opens up almost completely, the passenger door on mine is a bit lazy, but that's how it would be on the real car too, the struts tend to wear out over time ... just watch 'The Wolf of Wall Street' movie with Leonardo di Caprio when he tries to get into the white Countach 25th Anniversary at the country club ... the passenger's door doesn't stay open either.

This happens when you display these Countach models with the doors closed for many years, the spring loses its tension, I could fix it, but I'm not going to, that's just the charm of owning an old Lamborghini Countach, but just look at that interior from AUTOart ... it's all there, and it's all very nicely detailed, down to the shift pattern on the gear lever and the cassette player on the dashboard ... ready to play those classic Eighties songs. 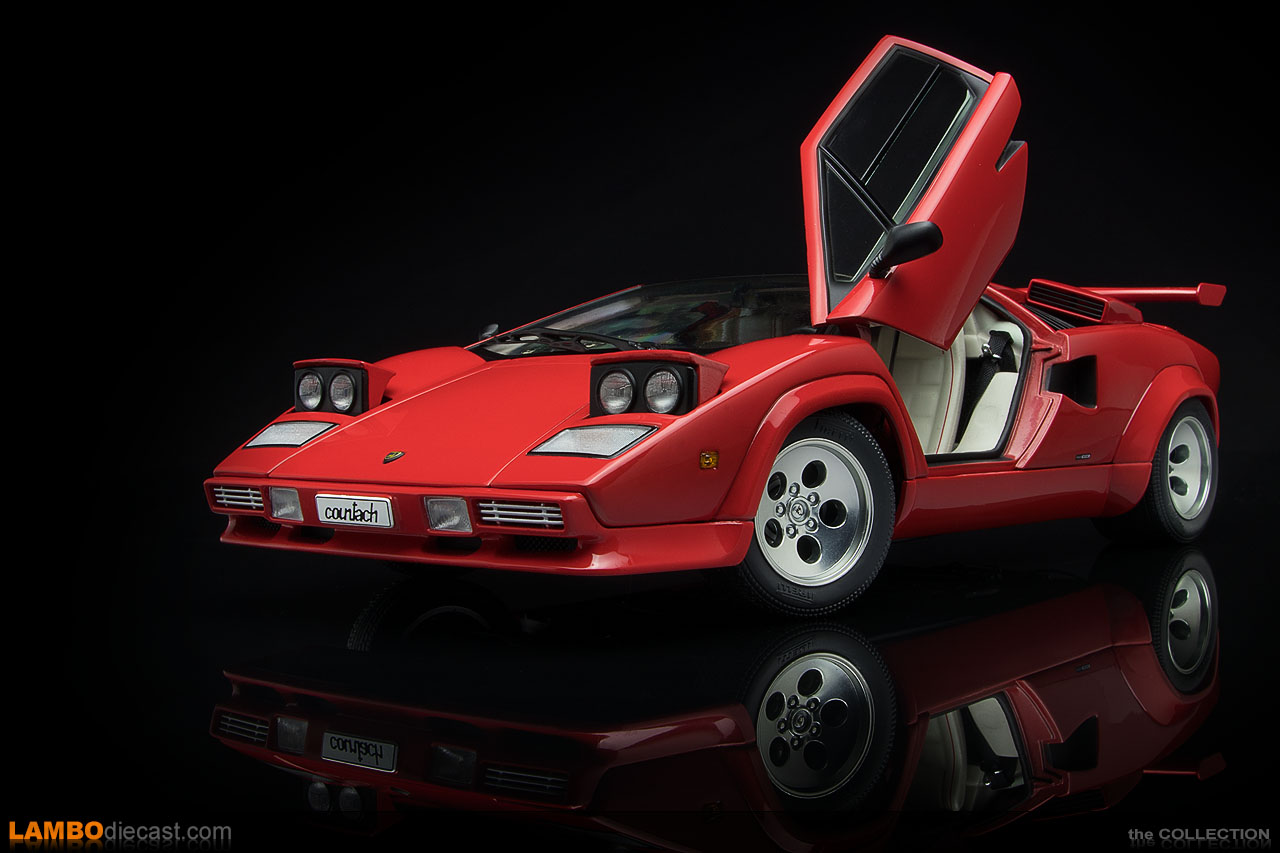 All the details are just right on this classic AUTOart model, the deep concave wheels, the wide Pirelli tires (with embossed script), the four exhausts ... and as seen on all three AUTOart Countach LP500S models, the 'Majestic Garage' decal at the rear under the lamborghini script ... an amazing detail, and yes, on the rear panel of the Countach the Lamborghini didn't come with a capital L, but a lowercase one.

A closer look at the rear shows some amazing looking taillights that are perfect replicas of the real deal, the exhaust tips even come with inner tubes, and that typical black grid under the license plate is there to protect the expensive muffler ... one little thing AUTOart missed on this model, and it's funny because I noticed the same 'mistake' on the recent IDEA Countach model ... they fitted Pirelli P-Zero tires on this 1982 Countach LP500S, this tire was only introduced in 1986 when the QV was already in production, and Lamborghini only started using the P Zero on the Countach 25th Anniversary in 1988. 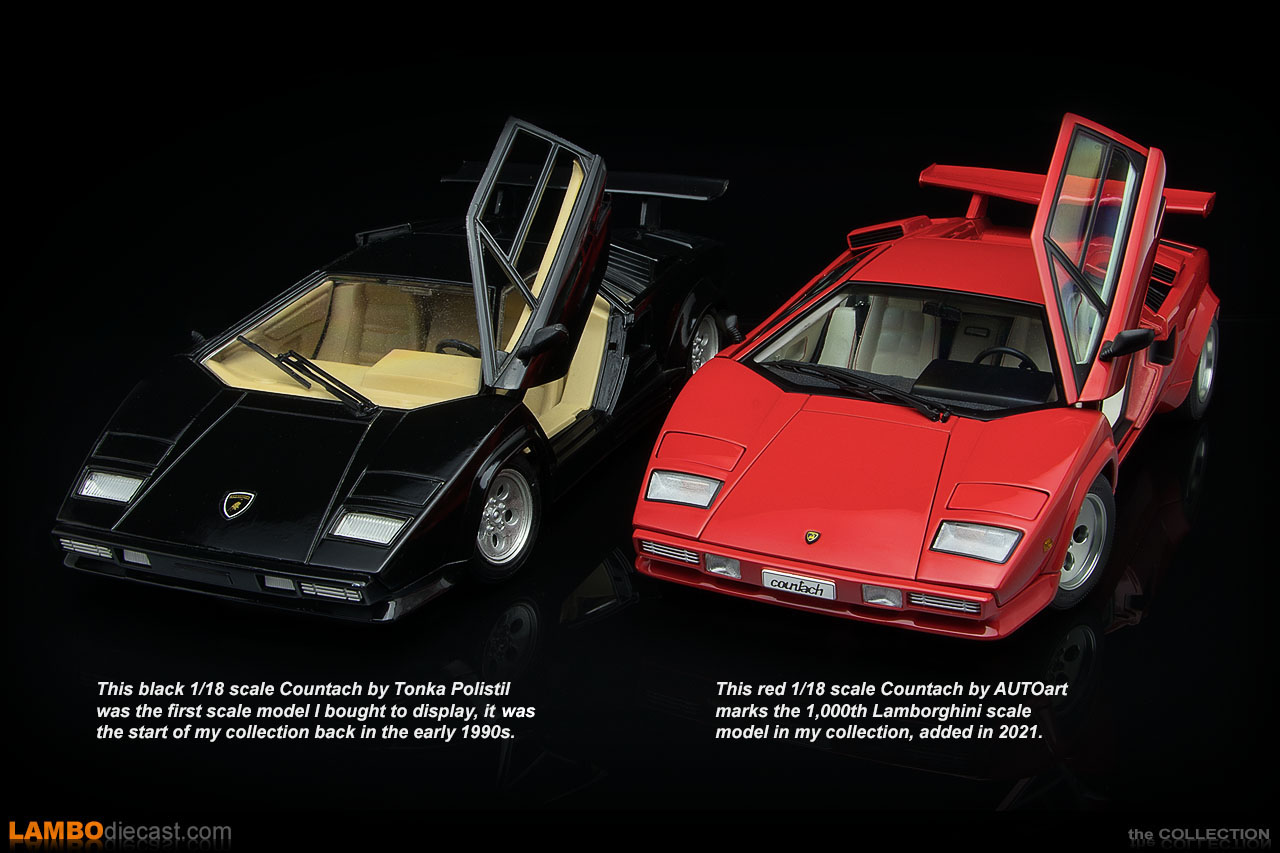 So despite the very high cost of this classic AUTOart 1/18 Lamborghini Countach LP500S or Countach 5000 S as listed on the AUTOart box, I am very pleased to have been able to add this beautiful masterpiece to my collection, even more so as it marks the 1,000th model I managed to collect over the years ... it all started with a 1/18 Countach, and 1,000 models later it's once again a Countach that joins the collection, I couldn't be happier, and I hope to be able to add many more models in the future.