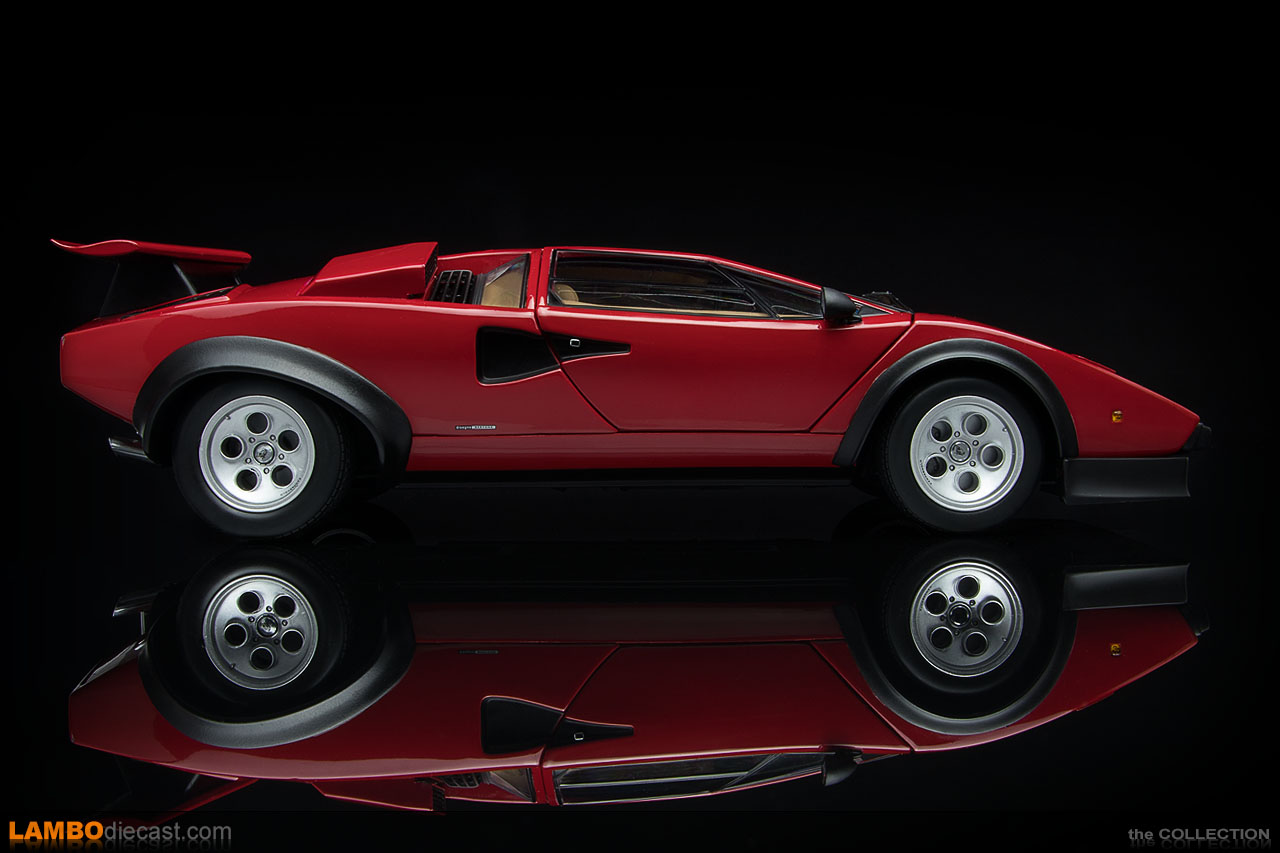 First, let's go back to September 1974, when Walter Wolf, a Canadian multi-millionaire, managed to convince Automobili Lamborghini SpA to build a very special Countach for him, adding wheel arch flares to cover extremely wide tires at the rear, which required a modified suspension design, the car was finished in red, but more importantly, Wolf had an enlarged engine fitted, from the standard 4.0-Liter V12 to 5.0-Liter, a similar displacement as seen in the Countach Prototype, but it wasn't the same engine, Wolf's 5.0-Liter V12 was another, experimental engine from Lamborghini, and Wolf didn't own it, he owned the car, but the engine remained the property of Lamborghini all the time.

This bright red Lamborghini Countach LP400, chassis nr. 112.014, would receive a lower front spoiler, wheel arch extensions, wider wheels as seen on the Silhouette, the famous 'telephone dial' Campagnolo rims, a massive rear wing that would become much loved on the Countach S later on, and when the suspension was redesigned to keep the wide Pirelli tires as flat as possible, the brakes were also upgraded to AP disc brakes with eight calipers, a Borg & Beck double-disc clutch was fitted and Walter Wolf had a custom, engraved steering wheel fitted to 'his' Countach. 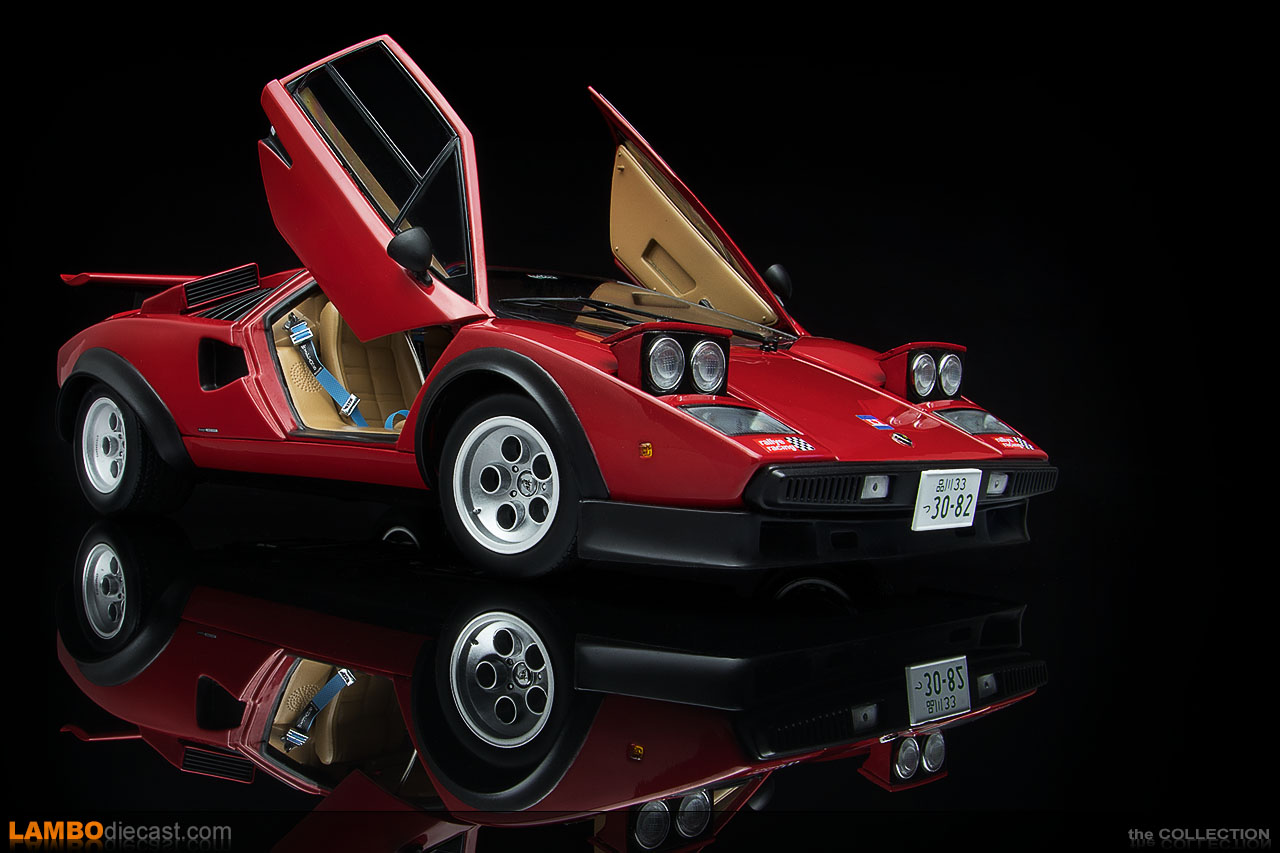 This very special 1974 Lamborghini Countach 'Walter Wolf' still exists, albeit located in Japan today, but it's still as close as possible to the car Wolf drove up to 1976 when he replaced it with the famous light blue Countach, chassis nr. 1.120.202, that came with similar modifications, and it's the current condition that has been replicated by Kyosho in this second release, complete with the correct, Japanese license plate.

So what's the difference between Kyosho model K08323R and this September 2012 release with item number K08323RV? There are a few subtle changed, like the use of satin black for the front bumper and spoiler, and the wheel arch extensions, on the initial release, these were glossy black. Also, this more recent release comes with a bunch of decals added, both the Walter Wolf logo with the Canadian flag at the front and the rear, but there are also some 'rallye racing' decals on both front fenders, and an 'Automobili Veloce' logo on the sun band of the windshield ... and if you look closely, another Automobil Veloce decal is found on the underside of that imposing rear wing.

Naturally, the white, Japanese license plate is another giveaway you're looking at the second Kyosho release Lamborghini Countach LP500S Walter Wolf 1/18 scale model, and it's the identical plate the car still wears today, I love that detail.

On the interior it does seem the overall details aren't as nicely done as on the earlier release, I saw the same happen with the two versions of the blue Walter Wolf car Kyosho released, but once again, this second release comes with blue seatbelts, whereas the first release had red seatbelts, I do find the 'Willans' name on the seatbelts amazing attention to detail from Kyosho, also the fact these are not automatic seatbelts, but real multi-point racing harness units, the actual fitting of these belts on rings behind the seats are a testament to that.

Overall this version of the Lamborghini Countach LP500S Walter Wolf in red from Kyosho is a very nice model, and with the additional details to set it apart from their initial release, I just had to add it to my collection. But these have become rather rare today, hence prices have risen considerably since 2012 ... funny enough the box of mine still had the original price tag on it, €103,99 ... save to say I had to pay considerably more in 2021 to obtain it, but would I recommend this model to you if you are looking to add the Walter Wolf Countach to your collection? 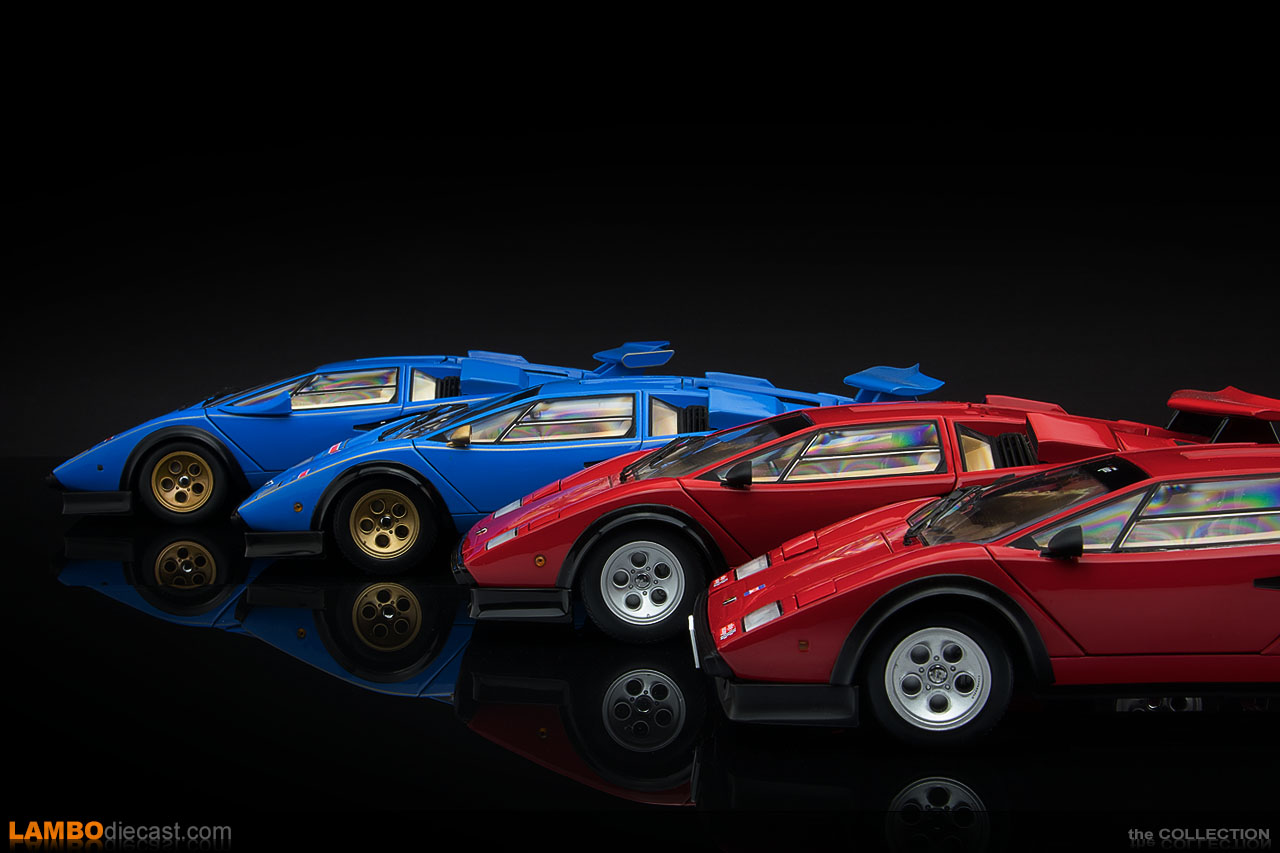 In all honesty ... no, not at the prices these tend to sell today, there are four different Walter Wolf Countach models released by Kyosho (well, 5 if you count the white LP400 with the roof wing too), and all of them are demanding steep prices these days ... and at this moment in time, I would go for the AUTOart version instead
I admit the AUTOart Walter Wolf Countach will be expensive to add, the blue one ever slightly more so than the red one, but they are so much better than these Kyosho ones, both in terms of detailing, as in terms of accuracy, so just try to get hold of one of the AUTOart ones instead.