Back in August 2018, Lamborghini unveiled the new flagship of their V12 range, if you liked the 2015 Lamborghini Aventador LP750-4 SV, I'm sure you love this new Aventador SVJ, for Super Veloce Jota, after the legendary Miura Jota and the Diablo SE30 Jote, the famous J letter appeared on a production model again, with only one Aventador J made we can't call that one a production model.

Actually, the Aventador SVJ comes with ALA 2.0, the now-famous Aerodinamica Lamborghini Attiva that uses flaps in the front bumper and in the large rear wing to modify airflow according to the driving conditions, be it on the road, or on a circuit, with 770 hp from the naturally aspirated V12 engine, a top speed over 350 km/h is possible.

The production of the Lamborghini Aventador SVJ is limited to 900 Coupe (later on the Roadster would be unveiled, limited at 800 units), and while this seems a lot for such a special car, compared to the SV numbers being 600 Coupe and 500 Roadster, the order book filled up quickly for this $520,000 MSRP car (do note most of them went well beyond $600,000 after options).

But that's for the 'standard' Lamborghini Aventador SVJ model, we wouldn't be talking about Lamborghini if they didn't have something even more exclusive up their sleeve ... the Lamborghini Aventador SVJ 63 edition, of which only 63 units would be made, complete with bespoke details to pay homage to Lamborghini's founding in 1963, the unique configuration features a lot of exposed carbon fiber on the outside, the show car being finished in Bianco Phanes with black livery and gold stripes ... and naturally a large '63' on the doors and front hood.

Recently I don't buy too many MR models anymore, for one they are expenive, secondly they are sealed resin, and thirdly ... usually AUTOart also releases most Lamborghini models, and these days makes like GT Spirit have made really nice Lamborghini models too ... but in this case, for the Lamborghini Aventador SVJ 63 I learned AUTOart wouldn't be releasing this very special livery, so I decided to ge the MR model to fill this void in my collection ... paid €370 for her ... only to read a few months later the Kyosho version of the GT Spirit 1/18 Aventador SVJ would be this 63 edition, in the same white shade .... needless to say I was a bit angry towards myself for spending this much money on a single model from MR. 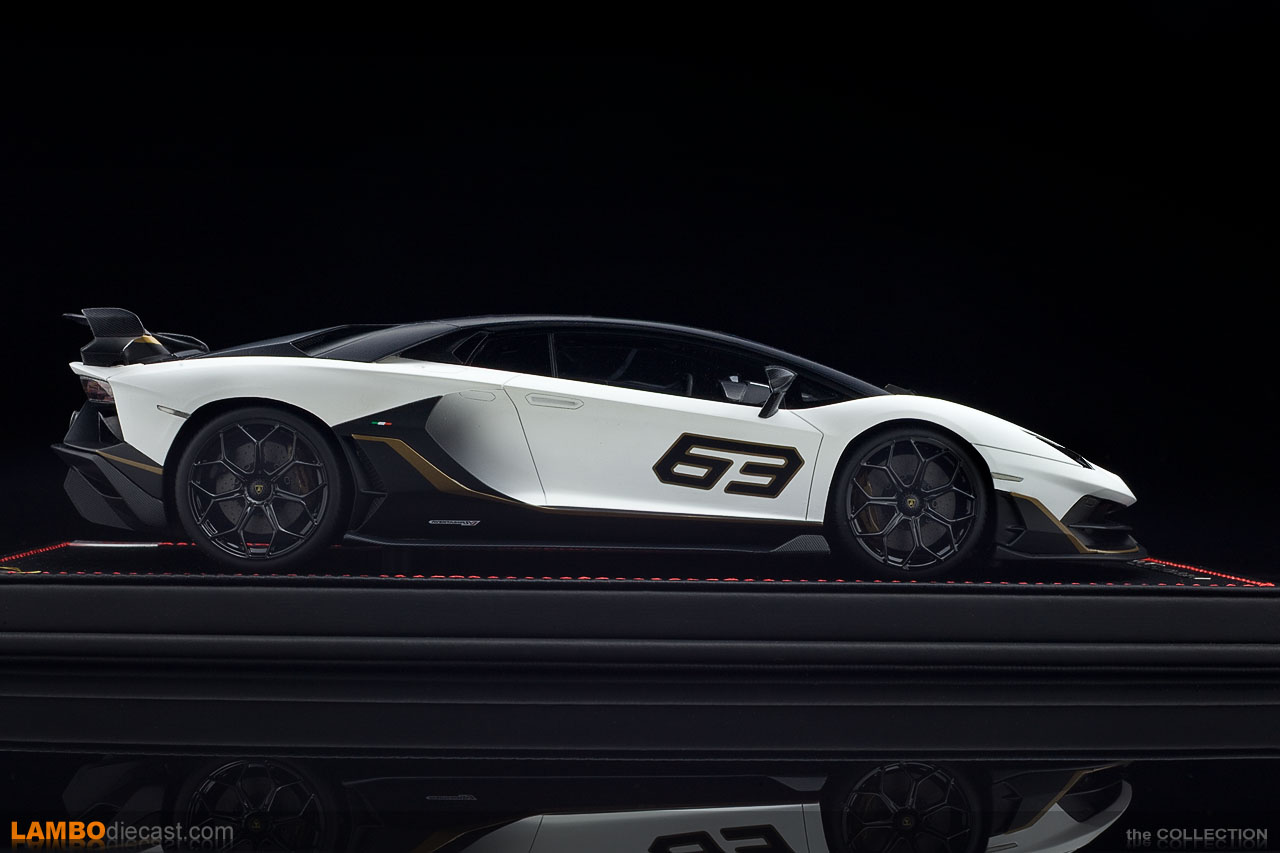 So while I really loved this MR made Aventador SVJ 63, I was a bit sad about seeing the same model for about 30% of what I paid for it ... but it turned out I had nothing to worry about ... you just can't compare the Kyosho model to this MR made scale model. What disappointed me the most about the Kyosho version was the fact they made the entire roof in satin black! The entire purpose of the Aventador SVJ 63 series was the fact it had lots of exposed carbon fiber, the entire roof is finished in carbon fiber on the SVJ 63, and MR replicated this perfectly in 1/18 scale, and what's even more impressive is the fact the carbon fiber weave is split in the center and changes direction ... I absolutely love this detail.

Now I would have loved if Lamborghini used Bianco Canopus on their SVJ 63 because that's a great looking satin white pearl metallic paint, while Bianco Phanes is also satin, but doesn't have that pearl metallic shine on her, I have taken a close look at this MR model from every angle, and it looks like they didn't miss a lot of details on the real car.

Even on the interior MR managed to put the black Lamborghini script on the dashboard and use gold cross-stitching on the otherwise nearly all-black interior (only a few white touches on the inside), and on the outside the lower section of the car are finished in satin black with a thin gold line running from front to back, they even put the gold line on the engine cover and around the center strut for the rear wing ... but the real car had a nice gold pinstripe on the vertical fins of the rear diffuser ... somehow MR missed those.

And if I'm really nitpicking ... the inside of the exhaust pipes on the real Lamborghini Aventador SVJ 63 show car have a gold finish, on the MR they are all black, but that is just looking for something to say ... this MR 1/18 scale model is extremely detailed and as close to perfection as you would expect from a scale model, even the brake calipers behind those glossy black wheels are gold finished.

While I was a little angry with myself for spending €370 on this MR model when I learned Kyosho would release it too, when it comes to details this MR is at the top of her game, the carbon fiber looks amazing, the details are all there, even on the inside, when looking through the small window in the engine cover you can admire the detail on the engine with the gold manifolds ... so for me, this MR model of the Aventador SVJ 63 is just perfect, and I have no regrets adding her to my collection.