Back in 1999, the Super Trofeo series didn't exist yet, you did have the Diablo SV-R from 1996 that competed in the first Lamborghini one-make racing series, in total 28 Diablo SV-R were built, some have later been converted to street legal versions ... but in 1999 we got to see a new evolution, the Diablo GTR that would race in the Lamborghini Supertrophy series by Stephane Ratel Racing Organisation, the SRO ... and the Diablo GTR also had a street legal version called the Diablo GT, unveiled at the 1999 Geneva Motor Show, this was a limited edition model next to the Diablo VT 6.0 production version ... only 80 would be built, all individually numbered.

Note that the Diablo GT was street legal in Europe only at the time, this car was not homologated for road use in the United States or Japan ... naturally several would make it onto those markets, but in 1999 you couldn't buy a Diablo GT in the USA from an official dealer.

The Lamborghini Diablo GT came with an enlarged 6-Liter V12 engine and a total power output of 575 bhp, top speed was set at 340 Km/h ... very impressive back in 1999, making this the fastest Lamborghini at the time. The roof panel was made of steel and the doors were made from aluminum, but the rest of the body was made from lightweight carbon fiber for the Diablo GT. The large rear wing was standard fitment on the Diablo GT and was finished in glossy, clear carbon fiber, as were the lower side sills, parts of the front bumper and the rear bumper ... all finished in visible carbon fiber.

On the inside the Lamborghini Diablo GT came with impressive racing seats and four-point harness seat belts, you could optionally have the standard Diablo seats installed too if you preferred some more comfort, those would come with normal seat belts too by the way, and as an interior rearview mirror was totally useless with that massive, center-mounted air intake, a rearview camera system with an Alpine sourced LCD system was available too.

The Lamborghini Diablo GT was rather expensive back in 1999, with an MSRP of $300,000 ... but as already mentioned, it wasn't officially available in the United States, still the entire foreseen production run of 80 units sold out very quickly, and in the end the factory actually built 83 Diablo GT in total, all left-hand drive mind you, even the four that were available for customers in the United Kingdom received their cars with the steering wheel on the left.

AUTOart made a 1/18 scale model of the Diablo GTR many years ago, and I love that one, but a decent 1/18 model for the Diablo GT hasn't been available yet, the one made by Motor Max wasn't really very good, with some very weird proportions, so when I learned about GT Spirit releasing a 1/18 Lamborghini Diablo GT model I was really looking forward to adding one to my collection. 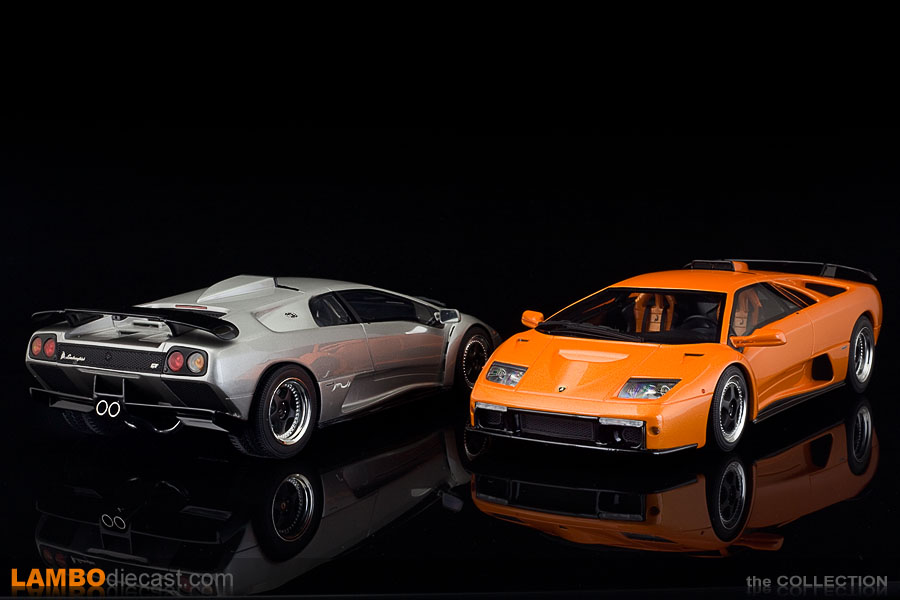 Then I found out GT Spirit would release it in silver metallic ... now what's that all about, silver metallic on a Diablo GT, that's no good I thought (turned out I was wrong, more on that later) ... so I couldn't be happier when I heard the Kyosho version would be orange metallic ... YES ... the shade used on the press release, factory demo Diablo GT, so I set my mind on that one ... and as usual, it was more expensive than the GT Spirit version, but I didn't mind, I wanted orange metallic.

When the box finally arrived, and I opened it for the first time ... I was impressed, very impressed by the paint. This orange metallic is stunning, a very deep shine, nice sized metal flakes ... perfect, I couldn't find any flaws in the paintwork of my model, and I absolutely loved it, couldn't wait to photograph it ... and put it next to my Arancio Atlas Diablo VT 6.0 by AUTOart ... oops, big mistake on my part. 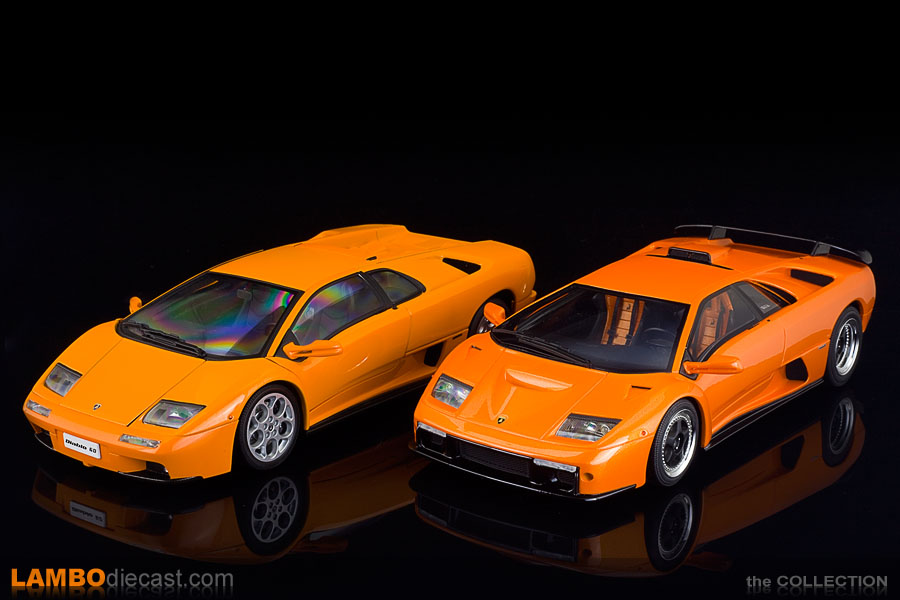 There are two flaws on the Kyosho made Lamborghini Diablo GT in 1/18 scale, one is the fact they used gloss black paint on the exterior parts that should have been finished in clear carbon fiber ... and the second one is the actual shade of the orange metallic paint ... it's wrong! The Lamborghini Diablo GT in real life was finished in Arancio Atlas, the same shade available on the Diablo GT, and later on various Murciélago versions ... the shade Kyosho used is too saturated ... it looks great on her own, but next to other models in this shade you immediately notice the real Arancio Atlas is slightly 'paler', not so intense.

Still I absolutely love this Diablo GT, even with these flaws, other than that it looks amazing, there are actual grille inserts on most of the intakes (behind the grille it's closed on most intakes, but there is a grille), if you look at the large rear vents you can actually see a fan and the large, twin, centrally mounted exhaust looks good too, they even put the rearview camera underneath the rear wing.

The chrome lip on the wheels looks correct, and they even managed to replicate all those little screws holding the multi-piece wheels together, and while there is an SV script on these similar wheels when installed on a Diablo SV, on the GT there wasn't in real life, and you can just see the Brembo calipers through the five spokes, even the tires have a nice Pirelli P-Zero thread replicated.

Inside this Kyosho model the seats are very nicely done, complete with Raging Bull logo on the backrest and what looks like cloth seat belts, the gearshift does look a bit too large but other than that the interior is very well finished inside this sealed resin model, the central console seems to have all the buttons from the real car ... and what is a surprise ... on the door panels and the central console you can distinguish a carbon fiber pattern ... if they could do it on the interior, why wouldn't they put it on the exterior parts too ... a strange decision from GT Spirit/Kyosho.

This model is without a doubt a must-have for any Lamborghini collection, and perhaps it should be in any model supercar collection, the Lamborghini Diablo GT is an amazing car in real life, and this GT Spirit/Kyosho model is a very good 1/18 scale reproduction of that rare Raging Bull.

This orange Kyosho version comes with number 37/80 on the plaque behind the driver's seat, note that the silver metallic GT Spirit version has a different number, it shows 11/80 ... which I think is a very nice detail ... both versions not only have a different body color, but they also got a different serial number, that's great attention to detail if you ask me, only one is correct with a Diablo GT in real life I've learned. 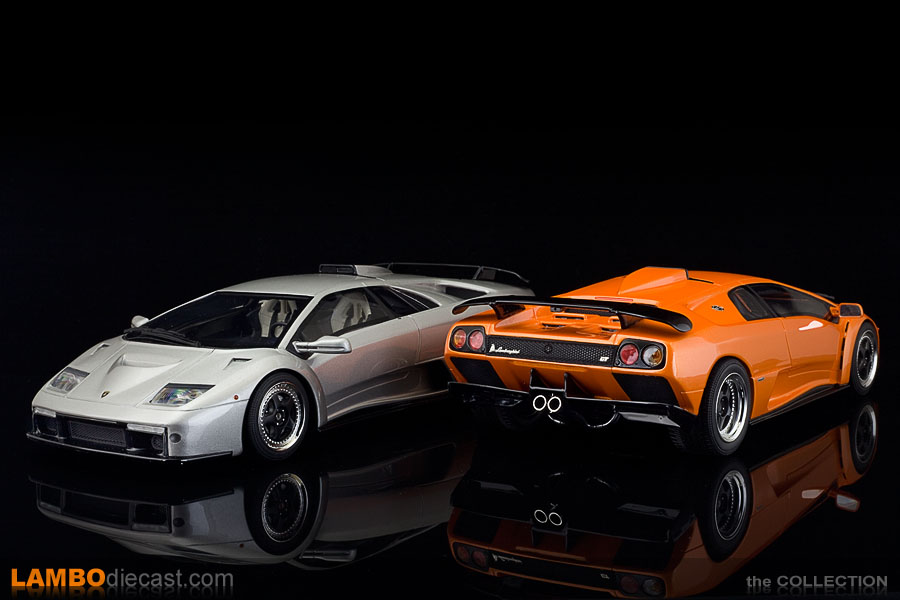 Now about the GT Spirit version, I was planning on only getting this orange metallic Kyosho edition, but after seeing the silver metallic version, and how impressive the paint was on that one too, I just couldn't resist ... and I ended up buying both.