Next to the Super Trofeo, one-make series in which we've seen both the Gallardo and now the Huracan battle each other, the Sant'Agata V10 model has been competing in GT3 races too, the Gallardo GT3 was developed by Reiter Engineering GmbH back in 2005 already, in 2011 we saw the impressive Gallardo LP600 evolution while two years later, in 2013 the final edition Gallardo GT3 FL2 was unveiled ... all made by Reiter Engineering.

When Automobili Lamborghini SpA unveiled the Huracan in 2014 we all thought Reiter Engineering would be asked to develop a GT3 track version too ... but that didn't happen, and the Squadra Corse department was created in-house to design and develop racecars for the factory ... they first came up with the Huracan Super Trofeo, and in early 2015 the Huracan GT3 was unveiled.

Starting in 2015, the Huracán GT3 would line up in the Blancpain Endurance Series that runs over five venues in Europe, among which is included the famous Spa-Francorchamps 24-hours race, later a Huracan GTD was created to run on the famous Daytona circuit in the United States ... in March 2018 a total of 70 Huracan GT3 had been built in Sant'Agata already.

The Lamborghini Huracan GT3 was officially unveiled in bright green, and I managed to add a replica of this press release car as a 1/18 scale model from Looksmart already, paid €269 for this one back in 2016, and yes ... it's a sealed resin model. But I was happy to be able to add this special Raging Bull to my collection, and I really enjoyed seeing her in my display case every day.

When I learned that AUTOart would be building the Huracan GT3 too I was happy, and I looked forward to adding this model to my collection too, I didn't go for the green presentation livery this time but opted for the plain white livery ... I love plain white racecars to be honest, they show the design and aggressive stance so much better without all those sponsors and other decals on the body.

This AUTOart model is similar to their Gallardo GT3 and Huracan Super Trofeo models, composite and with only the doors opening ... but until now the only Huracan GT3 I had was a fully sealed resin model, so getting a model with opening doors is already a step in the right direction in my book.

And opening the doors does unveil a nicely detailed interior ... as good as the interior on a racecar can be naturally, the central console is replaced with a new one holding track required dials, there is only one seat in this car, for the driver, and the dashboard is now an LCD display while the detachable steering wheel is nicely reproduced, complete with connection wire ... on the far right of the dashboard itself AUTOart even included the GT3 script, a very nice detail.

In place of the passenger seat AUTOart put the cell as seen on the real racecar, while a massive rollover cage is put in the cabin too, there is no rear view mirror inside the Huracan GT3, it would be useless anyway with the new engine cover blocking your view, and on the doors we find two lightweight mirrors mounted on new struts, again replicated perfectly by AUTOart. 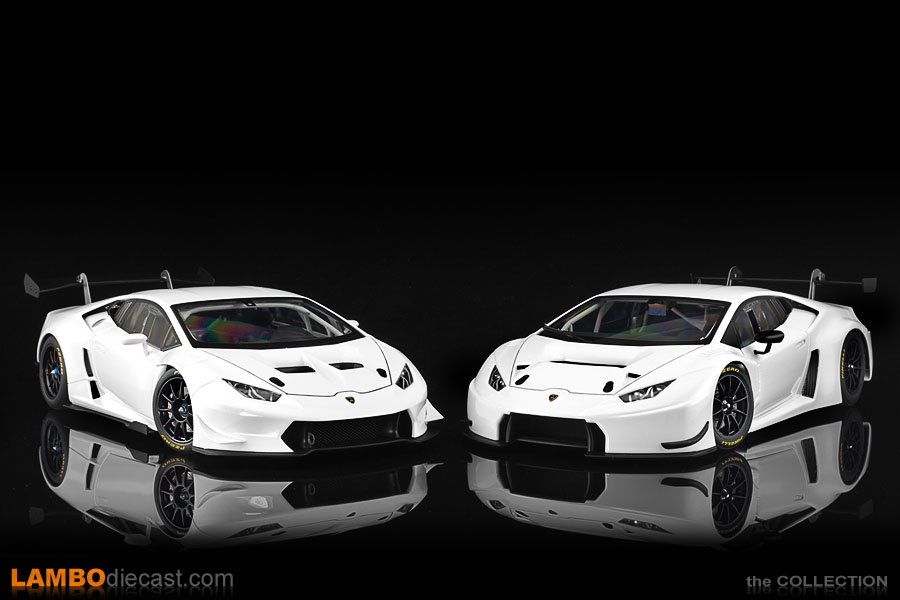 The rear wing on the Huracan GT3 might look the same as on the Super Trofeo version at first glance, but it is completely different in fact, on the GT3 the wing itself is almost perfectly straight, while the struts are open compared to the closed ones on the ST version. The engine cover and the vents behind the side windows do look the same, however, but the fuel filler is different again. 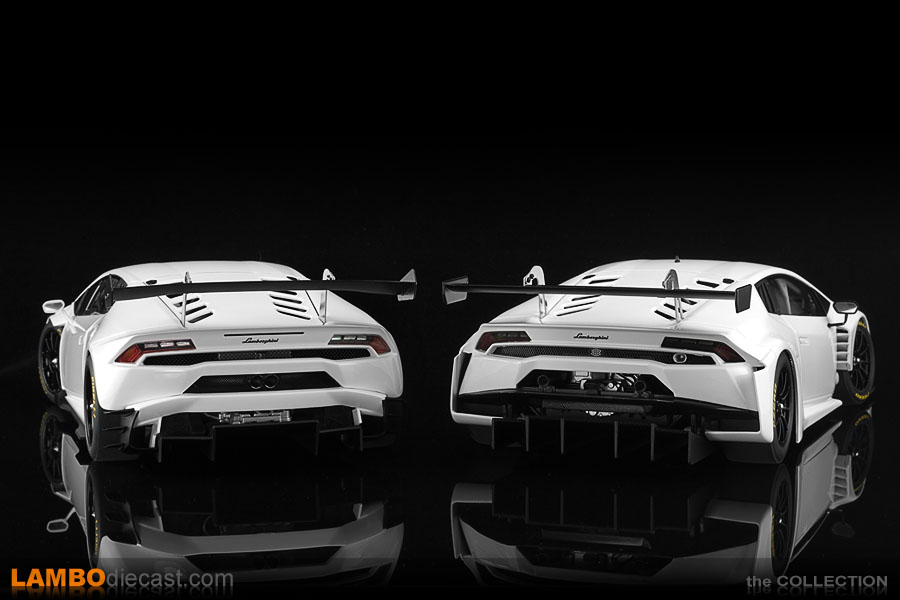 The front bumper, side sills, fenders, rear diffuser, and even the front hood are all bespoke to the Huracan GT3 showing a very different design compared to the Super Trofeo version, and AUTOart captured these perfectly, even when compared to the much more expensive Looksmart model, this AUTOart one shows a lot better detail.

When put side by side, the Looksmart made Huracan GT3 does show all the details that make this the GT3 version, but they are all a bit rougher, on this AUTOart model those vents, outlets and intakes are much finer made, especially those fins on the front wheel arches. Also, the rear diffuser looks a lot better than the Looksmart one, just more finely detailed, and you can see more details on the engine of this AUTOart model.

So is this a 'must have' model in your collection? This is always a tricky question I get asked ... for me this one was a must have for sure, I love plain livery, white race cars, and as I already owned the green presentation version of the Huracan GT3 adding this white AUTOart version was a perfect choice.

If you don't own any of the numerous Looksmart liveries on the Huracan GT3 I would surely recommend adding one of the AUTOart models to your collection, at this moment in time, and at the price set by AUTOart, their 1/18 scale model of the Huracan GT3 is the one to get.

Would I have liked to be able to admire the engine by having a removable cover? Sure I would, but that would also mean the model would have been more expensive in the end ... but for me that would have been worth it, but I love it with opening doors only just as much, this is a stunning 1/18 scale model of a very impressive race car.